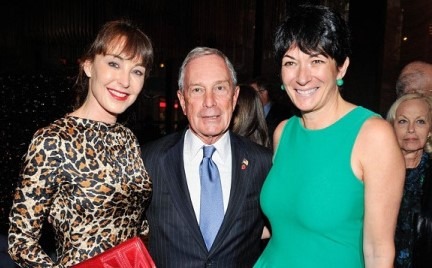 He has been photographed with Ghislaine Maxwell.

That is also a fact.

What was the relationship?

We can only speculate.

Was Michael Bloomberg an Epstein client?

Ghislaine Maxwell is reportedly traveling internationally to foreign nations including Israel, according to the New York Post, as reported by The Jerusalem Post. The FBI pursues a formal investigation into her activities with Epstein, who was ruled dead by suicide in his New York jail cell in a case that has sparked worldwide speculation and scrutiny. Ghislaine Maxwell’s emails have reportedly been hacked, adding another dimension of panic to the situation for globalist elites who socialized with Maxwell and Epstein.

Epstein was identified as a Mossad agent who blackmailed world leaders with underage sex traps by former high-ranking Israeli intelligence official Ari Ben-Menashe, who has staked his reputation on the claims.

Here is Alex Jones’ take on Bloomberg being in Epstein’s black book.

If you are rushed for time, he starts talking about Bloomberg and Epstein around the 2:20 mark.

Bloomberg isn’t the only Dem that has alleged Epstein connections.

He may, however, be the only candidate in that book that has a chance to win the nomination.

Lots of famous people are in that book, or have been otherwise connected to Epstein.

So far none of them have admitted guilt in sleeping with underage girls, though Prince Andrew has faced harsh consequences and basically been disowned by The Royal Family.

The extent of Epstein’s contacts will probably never be fully known with his death/disappearance.

Some believe he is still alive and was whisked away to a safe spot.

Photos have circulated that make a decent case for a body double being used.

Without getting too heavily into the conspiracy theories, it is important that we find out what in the heck is happening at Epstein’s bank.

As for Bloomberg, a picture with Maxwell and some theories will do nothing.

I voted for Donald Trump, but we must not forget that he had his own Epstein photos.

Trump was NOT in Epstein’s book.

I believe in the integrity of our President in 2020, but we must understand that famous people tend to collect plenty of skeletons in their closet.

Almost all of us can say the same.

What was Bloomberg doing with Maxwell?

Was it just a photo op?

Why is he in the book?

Whether Bloomberg is innocent or guilty of involvement with Epstein, it does not change the fact that his policies are horrible for America.