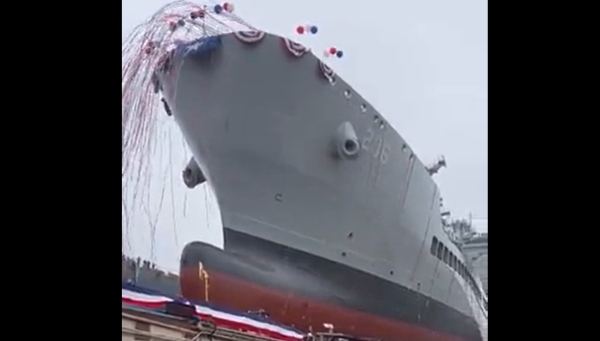 “The Chinese military has built targets in the shape of an American aircraft carrier and other U.S. warships in the Taklamakan desert as part of a new target range complex, according to photos provided to USNI News by satellite imagery company Maxar,” the report noted on Sunday.

“The full-scale outline of a U.S. carrier and at least two Arleigh Burke-class destroyers are part of the target range that has been built in the Ruoqiang region in central China. The site is near a former target range China used to test early versions of its so-called carrier killer DF-21D anti-ship ballistic missiles,” the site continued, citing reports circa 2013 indicating China was dramatically advancing its ballistic missile programs.

“This new range shows that China continues to focus on anti-carrier capabilities, with an emphasis on U.S. Navy warships. Unlike the Iranian Navy’s aircraft carrier-shaped target in the Persian Gulf, the new facility shows signs of a sophisticated instrumented target range,” the report continued.

A Janes analysis of commercially available satellite imagery taken on Oct. 25, which we were told we couldn’t publish to protect sources and methods, shows a new missile garrison built between 2019 and 2021 about four miles south of Xiangyang. Janes’ “event analysis” of the finding notes the “garrison possesses numerous features representative of PLARF missile garrisons, including a secure perimeter, various equipment garages, and drive-through high-bay garages for storing and servicing transporter-erector-launchers (TELs). Various barracks and support facilities are also present.” …

This revelation adds to the spate of commercial imagery exposing China’s most recent military moves.

Finally, China has been building warships at an alarming pace, officially now fielding the largest navy in the world at 355 ships, with a projected total of 460 vessels by the end of this decade.

While all of this has been occurring and speaking of naval warships, our Pentagon has been much more focused on giving new fleet vessels ‘the right names.’

Who is he, you ask? Milk was the first openly gay elected official in the history of California, who also happens to have been convicted of statutory rape.

“Bull Halsey, the fighting four-star admiral who commanded the U.S. 3rd Fleet during the Battle of Leyte Gulf [during World War II] and said he doesn’t trust a fighting man who doesn’t drink and smoke, turned over in his grave on Saturday,” begins a piece at The New American.

“The U.S. Navy, which used to give lavender sailors the boot, launched a replenishment oiler named for sexual deviant and statutory rapist Harvey Milk, the homosexual “political activist” shot to death in San Francisco in 1978,” the piece continued, adding: “Even better, the Navy permitted a ‘transgender woman’ veteran — a mentally-ill man who masquerades as the opposite sex — to christen the ship.”

My, how far our proud, capable military has fallen at the hands of political Marxists and countercultural freaks who are well on their way to destroying the last functional institution in America after having infiltrated all of the federal bureaucracy and turned the Justice Department and FBI into a political politburo for the left.

“Milk’s long history of sexual predation has never stopped the Left from lionizing him. His visage has appeared on a postage stamp, and President Barack Hussein Obama posthumously awarded him the Presidential Medal of Freedom,” The New American’s R. Cort Kirkwood noted.

While our Pentagon becomes rife with social justice warriors, China is building a military full of real warriors focused on victory. Some day soon we will learn this lesson the hard way.