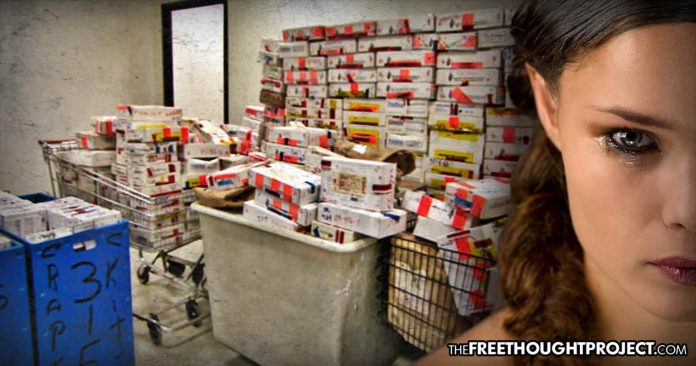 In the land of the free, those tasked with ‘protecting’ society — often and with extreme prejudice — fall far short of providing anything resembling actual safety. Instead, law enforcement in America often chooses profit over people. One particularly egregious example of this choice is the fact that tens of thousands of raids on people for suspected illegal substances take place every year, while hundreds of thousands of rape kits collect dust in police departments across the country.

If you were murdered today, there’s only a 60% chance of police catching the person who did it. That number drops to 3% if you’re raped. 50 years ago, that number was much higher. What happened?

The answer to that question can be found by looking at where police allocate much of their time and resources.

This decline is in spite of there being far fewer murders. It is also in spite of new technological developments to help police solve crimes, like DNA testing, advanced forensic labs, and unethical spying devices like the stingray.

Despite the near complete erosion of the constitutional protections against unlawful search and seizure, the clearance rate for murder continued its free fall. This highlights the fact that no matter how many rights are given up or freedoms diminished, police cannot guarantee your safety.

While police are failing to investigate murders, the rate at which they are ignoring rape is nothing short of criminal.

Every 98 seconds, someone is sexually assaulted in the United States.

According to the Department of Justice, there are hundreds of thousands of untested rape kits collecting dust in police evidence rooms nationwide, and many other estimates suggest that this number could be as high as one million.

As a result of this horrific negligence, roughly 3% of rape cases in America are actually solved. This is in spite of the fact that many rape kits have a high chance of leading to an arrest since most rapists are career criminals who have their DNA on file.

In some cases, the victims even know who their attackers were, but they can not prosecute these criminals because the evidence has yet to be processed by police.

However, because the victims of these crimes have had enough of being ignored, they are fighting back in the form of lawsuits. In a recent article in Mother Jones, the newspaper points out that women all over the country are filing lawsuits against police departments for failing to investigate their rape kits. Sadly, however, because the system is setup to protect itself, these lawsuits are being met with resistance from the highest court.

After being raped, victims are subject to more humiliation by having to undergo DNA evidence testing in the form of a rape kit. Thinking that this will help catch their abuser, most victims undergo these tests. However, as stated above, many of them are never investigated or uploaded to statewide databases.

“There’s no closure, there’s no, ‘Your rape kit has been tested and put in CODIS,’ no nothing,” Heather Marlowe — who has been repeatedly ignored by police — says of her case, nine years on, according to Mother Jones. “I was so desperate that I continued to work with the various city officials and advocates and whatnot who told me, ‘Oh no, just wait a little bit longer. They will get to you.’ I realized in retrospect that I think they were just blowing smoke.”

Marlowe is one of the victims who is suing police. However, last week she was dealt a major blow.

In 2016, Marlowe filed a federal civil rights lawsuit against the city, accusing the police department of mishandling sexual assault reports like hers by neglecting to process rape kits, allotting too few resources to sexual violence investigations, and failing to properly train and supervise personnel—all of which, the lawsuit argued, had a “discriminatory impact” on women. Her complaint alleged that the police department’s delay in testing her kit was part of a larger pattern of treating sexual assault with “deliberate indifference.” But her case was dismissed by a federal judge, and an appeal was denied by the Ninth Circuit Court of Appeals. On Monday, the Supreme Court denied a petition to reconsider the ruling.

The decision is a blow to the growing number of survivors across the country who have sued local governments for neglecting or mishandling sexual assault reports. For example, last summer, in Austin, Texas, three women filed a class action lawsuit claiming city and county authorities “disbelieved, dismissed, and denigrated” female sexual assault survivors and failed to pursue investigations, in part by not testing DNA evidence. In Maryland last fall, two former University of Maryland-Baltimore County students alleged that the Baltimore police department “covers up reports and refuses to investigate those it cannot cover up.” And in Memphis, Tennessee, a class action battle has been ongoing since 2013, when three women who survived attacks by the same serial rapist filed a complaint focused on the city’s roughly 15,000 untested rape kits. Other cases have been filed in Connecticut, Illinois, and New York.

The negligence and complacency in refusing to investigate these rape kits borders on criminal behavior, especially considering what happens when police actually investigate them. As TFTP reported earlier this year, lawmakers across the country have set out to shift the paradigm—and it is working.

As a result of this movement, according to law enforcement officials, more than 1,000 arrests and hundreds of convictions have been made from testing the backlog of kits going back months, years and, in some cases, decades.

According to the AP, the Justice Department has also allocated $154 million to help in clearing the backlog of kits as well.

One case in particular has garnered nationwide attention as a serial rapist, who has preyed on countless victims, was arrested in February.

Nathan Loebe had been raping women for years and walking free because police refused to test any of his victims’ rape kits. When Tuscon police finally went back over 1,400 rape kits, they tied Loebe to more than a dozen victims.

“Tucson Police initiated a full-scale investigation into these assaults and discovered that, for years, Nathan Loebe had impersonated Brian Bonsall, an actor on the popular sitcom Family Ties, to assault women he met on online dating sites,” Tuson’s DA said.

One of Loebe’s victims, speaking at a news conference in March, said having her kit “finally tested was a catalyst for hope,” according to ABC News.

In February, this serial rapist and violent criminal was taken off the streets and found guilty in Arizona of 12 counts of sexual assault, five counts of kidnapping, three counts of stalking, and one count of attempted sexual assault.

The hundreds of convictions mentioned above illustrate what happens when police go after actual criminals instead of people who choose to partake in substances deemed illegal by the state. Sadly, however, it has taken hundreds of millions of dollars in incentives for police to finally prosecute these actual criminals and the victims who attempt to hold them accountable are still being ignored. For now, however, at least some victims are finally seeing justice.