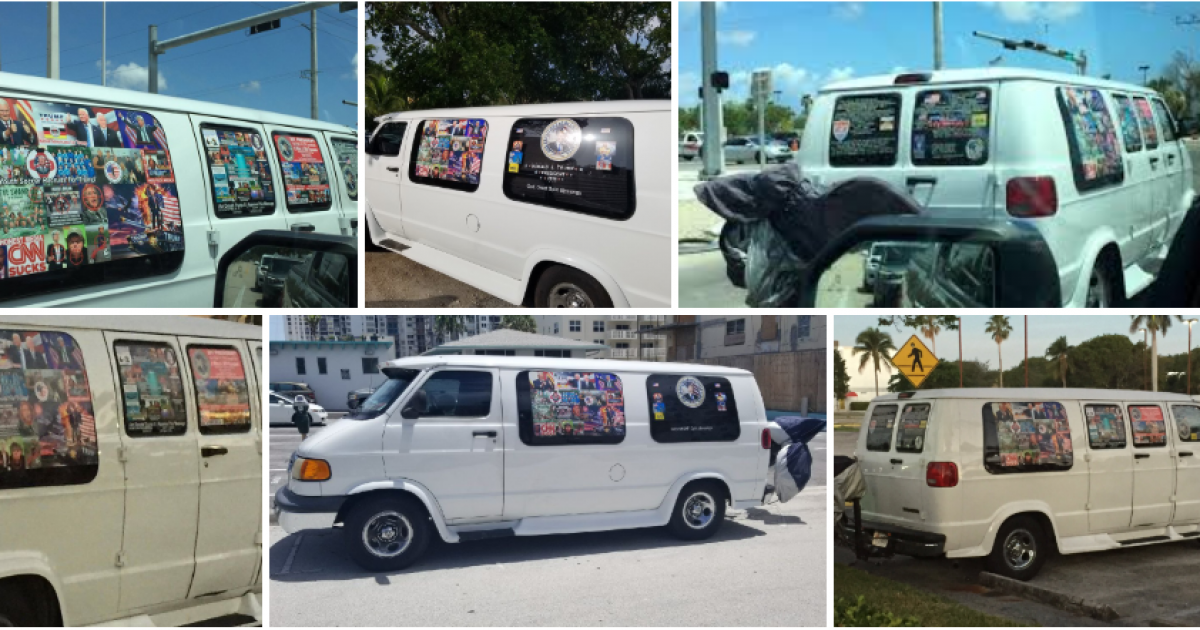 Look, there is no doubt that Cesar Alteiri Sayoc and his fake bomb plot were nothing more than a false flag operation. In fact, there is some evidence that may point to the fact that he might just be involved not only with the Democrats, but with the Central Intelligence Agency, as well. However, as we reported earlier, the most notable feature of the entire scene of this false flag was the allegations that Sayoc had been a Trump supporter for nearly two years and yet, the stickers all over his van not only violated the law in the state of Florida, but also were pristine in a climate filled with hot sun and lots of rain. So, if you questioned that, here’s why that was the case.

After Sayoc’s Facebook pages froze investigative journalist Shad Olson was able to capture a screenshot of Sayoc’s Facebook post, which was dated August 28, 2016, in which you can clearly see that his van did not have the stickers on it.

Here’s shots of the van with the stickers.

Moments after his arrest, Sayoc’s social media accounts and personal details were suspended, stricken and taken off the web. His facebook page glitched and froze at exactly 11:24 MDT, even as independent journalists like yours truly scrolled furiously looking for shelf-life clues to gain better insight into the real makeup of the so-called, ‘MAGA Bomber.’ But not before I was able to capture this image (below) of the now infamous white panel van, without the Trump regalia so necessary to acrue the political hit points needed to paint Donald Trump as an inciter of hatred, violence and pain.

Since image download and capture were made impossible by the deletion or suspension of Sayoc’s facebook account, the screenshot still shot of a video clearly shows the same white panel van on August 28, 2016, without the Trump stickers or vehicle wrap made famous by this week’s events.

A much more commonplace and nondescript getaway vehicle, if one were seriously undertaking a criminal plot without intentions of being apprehended. Keep in mind that in July and August of 2016, Cesar Sayoc’s facebook timeline shows him in almost constant attendance of Trump rallies and events, snapping selfies, taking videos and loading down his page with enough red meat “thou protesteth too much,” to choke James Woods. And yet, not a single Trump sticker is visible on the exterior of his trusty white van that witnesses say he parked in parking lots and slept in both at out of town events and otherwise.

Which means of course, that Cesar must have considered it very good strategy to wait patiently, biding his time before making up that generic white van like a Donald Trump parade float immediately prior to undertaking a D.C. sniper version of a psychological terror campaign, leaving those vehicle wrap window coverings proudly and boldly in place for the entirety of said campaign, even after the alleged hoax bombs had been delivered and his alleged handiwork became the most intensely covered news item in the nation for two weeks straight.

Maybe, possibly, there are people dumb enough to intentionally do that.

Or just maybe, Mr. Alleged Hoax Bomber wanted to get caught looking like the world’s most syrupy Trump fan boy, knowing that his Trump-mobile MAGA bomb delivery vehicle would instantly become the most vividly captured image in the political universe just days before the most important midterm election in American history.

After all, a picture is worth a thousand words. Or, in this case, maybe a million votes or more.

A disgruntled Bernie voter like Sayoc can only hope.

Clearly, he doctored the van up just prior to the fake bomb hoax. He did that to implicate those who support President Donald Trump, and there was nothing to gain for a true supporter of the president. The only thing to gain from that was negative.

Even his boss, Stacy Saccal of Ultra Gentlemen’s Club in suburban West Palm Beach, thinks the whole thing is bizarre, and she wants him prosecuted.

The plot thickens as Sayoc’s longtime friend is a Central Intelligence Agency agent.

In a social media post in 2016, Sayoc wrote: “I would like to wish my great friend from Academy 9 yrs military school Ricki a happy birthday and lifetime from CIA. Congrats on your invention and many successes my brother.”

Sayoc’s social media accounts have now been expunged from the net. But early yesterday morning, an enterprising netizen managed to take a screenshot of Sayoc’s 2016 post:

According to Forbidden Knowledge TV, Sayoc’s CIA friend Ricki is former CIA agent Enrique “Ric” Prado. This is Prado’s self-description on his website:

Enrique “Ric” Prado is a twenty five year veteran of the Central Intelligence Agency where he served in six overseas posts, including as Chief of Station in a Muslim country. Domestically, he served as Chief of Operations for the DCI’s Counterterrorist Center under Ambassador Cofer Black during the 11 September, 2001 attacks and the subsequent war on terrorism. He also served as the Deputy on the original bin Laden Task Force. Highly decorated, he received the CIA’s Distinguished Career Intelligence Medal (highest award given to Senior Officers), as well as CTC’s George Bush H. W. Bush Award for Excellence in Counterterrorism, among others. He is a native Spanish speaker and a graduate of George Mason University.

As C/OPS at CTC, then a Senior Intelligence Service (SIS) officer, Mr. Prado oversaw CIA’s counterterrorist efforts post 9/11 and coordinated SPECOPS activities with the NSC and FBI, as well as elite U.S. Military representatives from DELTA, and SEAL-Team Six then detailed to the CIA. Mr. Prado was also Deputy Chief East Asia Division, running CIA’s Korean Operations and previously, as Chief of CIA Liaison in Seoul, Korea. He spend his first ten years in CIA as a Paramilitary Officer serving in dangerous areas, to include 18-months in the jungles of Central America as the first CIA officer living in the anti-Sandinista “Contra” camps, and running CT operations in Peru and the Philippines. He is a former member of the elite USAF Pararescue. Upon retirement he worked as a Special Advisor to MITRE Corporation and subsequently as Vice President for Special Government Programs at Blackwater U.S.A.

Throughout his Agency career and post-retirement work in support of the U.S. Intelligence Community, Mr. Prado has developed a substantial network of intelligence operation officers, investigators, military and police officer contacts worldwide. He now brings these resources to the private sector.

In his 50-page e-book How to Get Away With Murder in America, author Evan Wright tells the story of Enrique Prado, a high-ranking CIA-officer-turned-Blackwater-employee who oversaw assassination units for both the CIA and the contractor. A federal organized crime squad run out of the Miami-Dade Police Department tied Prado to seven murders carried out while he worked as a bodyguard for a narco crime boss. At the time, the CIA declared him unavailable for questioning; the investigation was shut down before he was arrested or tried. (The Atlantic)

Prado is said to have moved a secret death squad from the CIA to Blackwater. (Wired)

According to Wright, Prado was involved with the Mafia throughout his CIA career, which ended with him as head of the agency’s secret assassination squad against Al Qaeda. Wright wrote: “In protecting Prado, the CIA arguably allowed a new type of mole — an agent not of a foreign government but of American criminal interests — to penetrate command.” (Daily Mail)

Is it possible that Sayoc is tied to the CIA? Entirely possible!

Now, with all that said, what I want to know is who is contributing to his bank account? I’m sure Democrats are not stupid enough to have done it outright. However, what group, groups or individuals funded this guy?

I’m guessing when you really dig deep, something we know the FBI won’t do in this matter, you would discover probably Democrat ties, maybe with a little George Soros group funding thrown in for good measure.