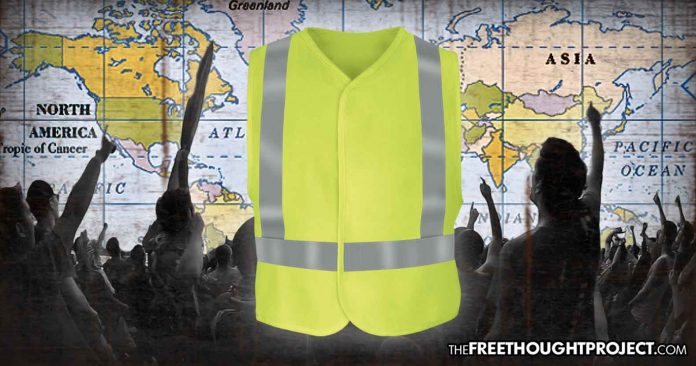 Paris, France — A grassroots movement made up of citizens who have become fed up with the political establishment in France has been growing since early November and it has come to a head this month. The movement, known as “gilets jaunes” or “yellow vests” began as an anti-tax protest but has since merged folks from the left and the right into a much broader anti-government movement. The movement has become so large that political experts are now calling it a “new revolution.”

French citizens have used the yellow vests that their government requires they carry in their vehicles as a symbol of this protest. As the Guardian points out, unlike previous French protest movements, it sprang up online through petitions and was organised by ordinary working people posting videos on social media, without a set leader, trade union or political party behind it.

The protest was so successful that last week, French Prime Minister Edouard Philippe announced a six-month suspension of the fuel tax which triggered the unrest.

The people flexed their power and the people won—on this single issue. However, the people of France have long been exploited by their corrupt rulers and this has caused the rise of populism. Populist movements reject the left/right paradigm and don’t adhere to any strict political ideologies that tow left or right lines.

Because populist movements reject the left/right paradigm, they are far stronger as they bring in people from all over the spectrum. It also makes them quite rare and what we are witnessing with the yellow vest movement is approaching historical levels of populism.

First of all, the fact that populist movements are directed against the political elite as a whole, without making a distinction, whether it is right or left-wing, is striking. This is the ‘uprising of the periphery of society against its center’. In his famous work, the American sociologist Christopher Lasch (1932–1994) designated the form of government that prevails in modern Western society as the “elite revolution”.

When referencing the ‘Elite Revolution’, Dugin explains how those at the top of the power structure tend to control this power through their immense will to rule. The result of the elite revolution is far more destructive to culture and society than a revolution of the masses because in the name of diversity, elites from all groups seek this power and use it to oppress their own. ‘Do as your group leaders tell you to do, or you are part of the problem.’

Accordingly, populism – including the populism of the “yellow vests” – can be viewed as a retaliatory uprising of the people against the elites, who have completely lost their connection with society. The elites have built their own world in which double standards, norms of political correctness, liberal demagogy reign.

According to these “new elites”, the people and society, in their current state, have no place in this world. Therefore, the typical representative of the “new elite”, Hillary Clinton, upset by the success of the right-wing populist Trump, openly insulted ordinary Americans – as deplorables, which in meaning means “shameful.” “Deplorables” have chosen Trump – not because they loved him, but to respond to the “globalist witch” Clinton.

Macron is a representative of the same type of “new elite”. It is curious that on the eve of the elections the French newspaper ‘Libération’ published the headline ‘Faites ce que vous voulez, mais votez Macron ‘ (“Do what you want, but vote for Macron”). This is an obvious paraphrase of Aleister Crowley, who proclaimed himself in the 20th century as the Antichrist and the Beast 666: “Do what thou wilt shall be the whole of the Law”. In other words, obedient crowds should vote for Macron not for some rational reasons, not because of his ideas and virtues, but simply because this is the imperative law of the ruling elite. And the disregard of the elites towards the obedient, slain masses is so open that they do not even bother to seduce them with impracticable promises: “Vote for Macron, because this is an order and this is not discussed.” Vote and then you are free. Otherwise you are deplorables. And that’s all.

Do not misinterpret the above text as an endorsement of Trump or any ideology for that matter as it is not. It is merely used to point out how populist movements expand as more and more people get excluded from the establishment and censored, shamed, and ridiculed into a corner for not toeing the line of their oppressor class.

Now, we are witnessing the inevitable result of pushing people into a corner by controlling everything they can and can’t say and taxing them into oblivion while doing it. Although the yellow vests began in France, we are now seeing reports of similar protests sparking up in other countries as well.

Demonstrations have spread like wildfire from France into Belgium and the Netherlands as hundreds of yellow vested protesters are met by riot police.

As the Times reports:

Amid the tensions, police personnel were forced to use water cannons and pepper spray in a bid to disperse the demonstrators. Protestors gathered in Arts-Loi in Brussels and staged a massive walkout towards Schuman Roundabout, home to a number of European Union offices and towards the European Parliament, but were stopped by the security forces.

During the clashes, the agitators blocked arterial roads, threw stun grenades and damaged traffic signals and the environment. Over 100 people have been detained by the police so far. They have demanded Belgian Prime Minister Charles Michel to step down from his post.

In the cities of Amsterdam and Rotterdam in the Netherlands, protestors staged a peaceful demonstration in various parts, singing and handing flowers to the passers-by and asking them to participate in the agitation, according to local media reports. Security has been heightened in both the countries as more protests are planned in the coming days.

TFTP has also seen groups planning yellow vest protests in the United States. Message boards, such as 4chan, have announced protests on December 15th at 12:00 p.m. in Massachusetts, New York, and California.

So long as these movements remain peaceful, we have already seen the power they wield. The yellow vests are reminding the world who has the real power, and the world would do well to listen.