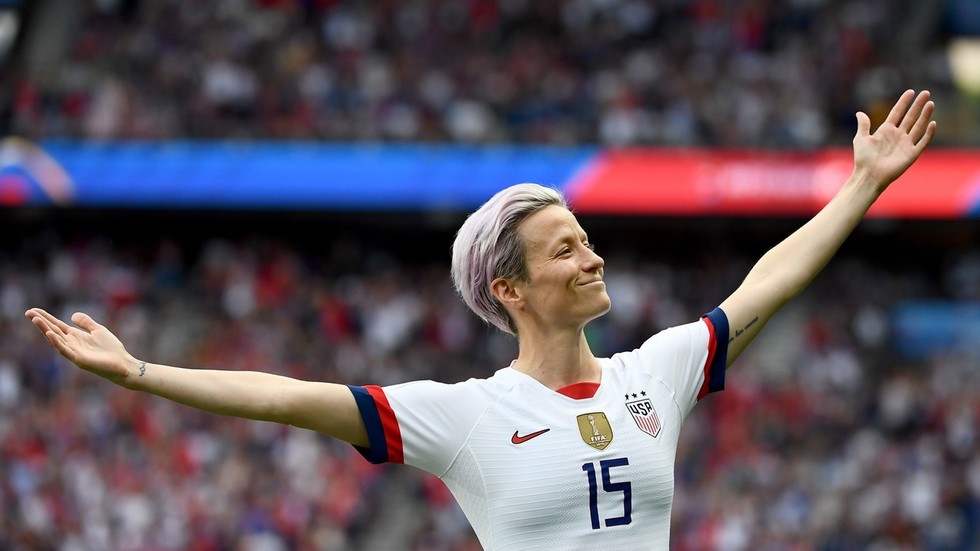 Fresh from a week in which she was involved in a row with President Donald Trump over her comments that she wouldn’t “go to the f*cking White House” if the US won the World Cup, Rapinoe scored once in each half to see off France 2-1 in Paris and book a semifinal date with England.

After the game, Rapinoe, who is gay, was asked what the result meant to her coming as it did during Pride month.

“You can’t win a championship without gays on your team – it’s never been done before, ever. That’s science, right there,” the 33-year-old said.

“I’m motivated by people who like me, who are fighting for the same things. I take more energy from that than from trying to prove anyone wrong. That’s draining on yourself.

“But for me, to be gay and fabulous, during Pride month at the World Cup, is nice,” she added.

“Erm, yes you can. Let’s not get ahead of ourselves here, Ms Rapinoe… football competence isn’t linked to sexuality,”Morgan tweeted when sharing a link to the quotes.

Erm, yes you can.
Let's not get ahead of ourselves here, Ms Rapinoe… football competence isn't linked to sexuality. https://t.co/rJpcSbbY4i

The British presenter – a friend of US leader Trump – had earlier tweeted that Rapinoe had a “stupendous ego” as he posted a picture of the star celebrating against France.

“Ms Rapinoe sure does love herself. Can’t wait to see our Lionesses dent that stupendous ego,” Morgan wrote in anticipation of the US team’s semifinal meeting with England on Tuesday.

Ms Rapinoe sure does love herself. Can’t wait to see our Lionesses dent that stupendous ego. pic.twitter.com/w5FzcnXvGQ

Others were also bemused by Rapinoe’s comments, which were made in the mixed zone after the game.

And in that one statement, undermines all the good work of those that have helped to support & raise LGBT awareness.

Actually you can, but ok.

Rapinoe and the US will be favorites to retain the title they won four years ago, and head into the game with England in Lyon on Tuesday having suffered just one defeat in their last 43 matches, and on a run of 10 straight World Cup wins.

England, managed by former men’s international and Manchester United star Phil Neville, booked their spot in the semifinals with a dominant 3-0 win against Norway.