Leftist protesters gathered outside Walter Reed military hospital where President Trump is being treated and danced and cheered for the commander-in-chief’s death while holding “F**k Trump” signs.

“Your president is dying!” one woman shouted, dancing and flicking off a group of Trump supporters.

Video of the incident was shared Saturday morning on social media:

Another group of protesters were seen holding up “Fuck Trump” signs and chanting, “Waah, waah, your leader’s gonna die!”

Freedom of speech yes. None the less they are miserable, disgraceful and deranged. Sad. pic.twitter.com/Baoz0ucFkU

The protesters stood in stark contrast with the large group of Trump supporters who gathered to pray and cheer for his recovery.

We're praying for you @realDonaldTrump! 🙏 pic.twitter.com/iIaBpc84Va

President Trump appeared to be in great spirits on Sunday and visited his supporters outside Walter Reed.

Trump was dancing in his SUV outside of Walter Reed😆 pic.twitter.com/zFJtRBq20K

Trump drives by the press and supporters outside Walter Reed hospital. pic.twitter.com/3phtKthqTH

My close-ups from Trump’s drive-by outside Walter Reed hospital. pic.twitter.com/sx1lALWIIU

President Trump drives by to greet his supporters outside Walter Reed
pic.twitter.com/BUrOMOjeHS

Trump’s doctors said he will could be discharged as early as Monday.

Another Doctor Comes Forward: For All The Information That Is Out On This Fraudulent Plandemic, One Has To Ask Why No One Has Been Charged (Video) 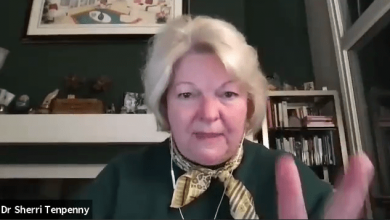 Do You Want To See Where This Is Going If It’s Not Stopped? Employees Chase Down & Assault Customer Without A Mask…