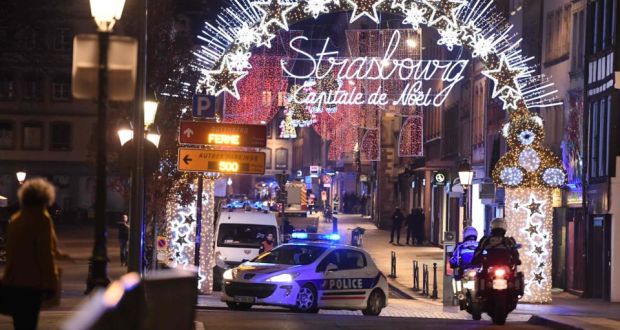 Tell me again the point of those terror watch lists. To watch them go out and kill people in the cause of Allah?

The suspected gunman behind the deadly shooting in Strasbourg, France Tuesday evening has been identified and was on a “Terror Watch List,” though officials refused to release the man’s name or age.

“A shooting in the French city of Strasbourg killed two people and wounded at least eight others, officials said. The shooting sparked a major security operation around a world-famous Christmas market on Tuesday. The gunman, who is at large, has been identified and had been flagged as a suspected extremist,” writes CBS News.

French police are searching for a man who shot dead at least four people and wounded numerous others, several critically, in central Strasbourg.

The first shots were fired just before 8pm in the rue des Orfèvres, near the Strasbourg Christmas market, which is the largest in France. An attempted attack by al-Qaeda was foiled there in 2000.

The suspect carried a knife as well as a handgun. He shot at police first, and then fired randomly at passersby. French intelligence identified him from images taken by a surveillance camera as a 29-year-old who was born and lived in Strasbourg and had a criminal record.

The suspect is listed on the “S” (for state security) list of suspected Islamic radicals. A police source said the suspect was supposed to have been questioned yesterday morning in connection with other matters but was not at home when gendarmes arrived to search his apartment.

French prosecutors say a terror investigation has been opened into the shooting. Local authorities are advising residents to stay inside.

The European Parliament in Strasbourg has been shut down and staff have been ordered to remain inside, a spokesperson said.

Police in Germany have said they are strengthening controls at the Franco-German border near Strasbourg.

The police force of Baden-Wurttemberg, a state in south-west Germany bordering Strasbourg, tweeted they were taking the extra measures at the border because of the shooting.

“There were gunshots and people running everywhere,” one local shopkeeper told BFM TV. “It lasted about 10 minutes.”

French president Emmanuel Macron was informed of the shooting and was being updated as events unfurled, an Elysee Palace official said. Interior minister Christophe Castaner was on his way to Strasbourg.

The Christmas market was being held amid tight security this year, with unauthorised vehicles banned from surrounding streets during opening hours and checkpoints set up on bridges and access points to search pedestrians’ bags.

Sinn Féin MEP Martina Anderson tweeted: “We were in the centre of Strasbourg town when gun shots went off…My thoughts & prayers with all who are injured.”

France remains on high alert after a wave of attacks commissioned or inspired by Islamic State militants since early 2015, in which about 240 people have been killed.

In 2016, a truck ploughed into a Bastille Day crowd in Nice, killing more than 80, while in November 2015, coordinated attacks on the Bataclan concert hall and other sites in Paris claimed about 130 lives. There have also been attacks in Paris on a policeman on the Champs-Elysees avenue, the satirical weekly Charlie Hebdo and a kosher store.

Almost exactly two years ago, a Tunisian Islamist rammed a hijacked truck into a Christmas market in central Berlin, killing 11 people as well as the driver. – Agencies