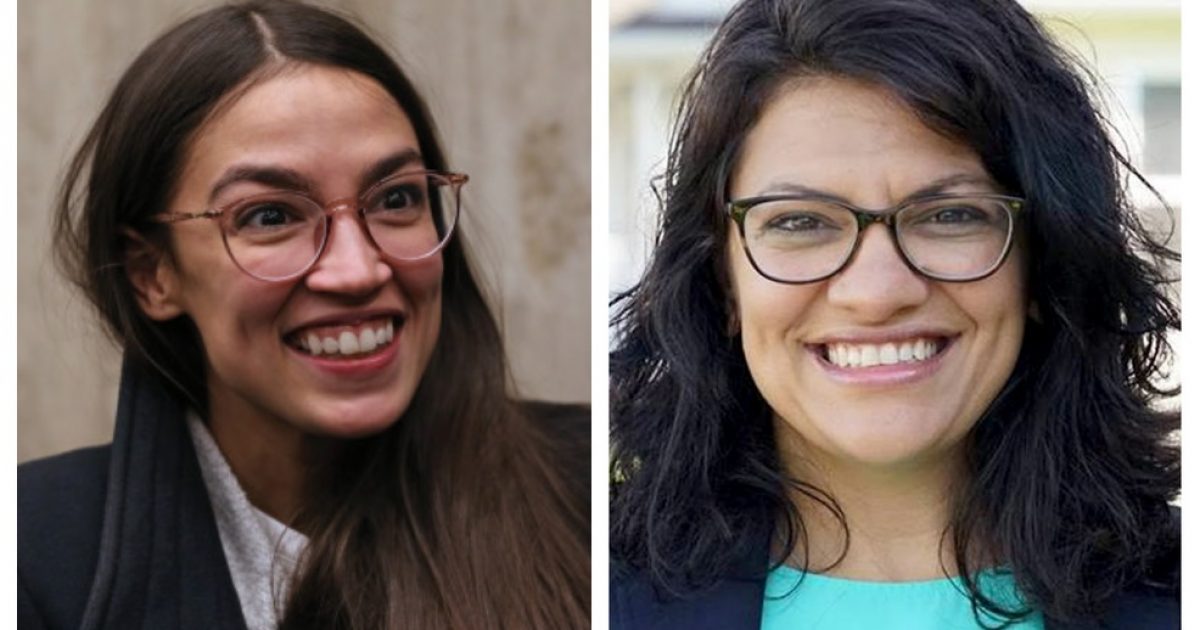 It looks like Americans in New York and Michigan, and no doubt elsewhere, will come to regret putting these women into office. Both Alexandria Ocasio-Cortez (D-NY) and Rashida Tlaib (D-MI) have been found to have committed ethics violations, and they haven’t even been sworn in yet! This is the kind of criminally-minded people being put up as representatives of the people.

First, let’s take the woman making all the waves as she arrives in DC, Alexandria Ocasio-Cortez.

Donald Trump, Jr. posted a meme on Instagram that made fun of socialism, which is something Ocasio-Cortez endorses. No doubt, Trump Jr. has been following what is going on down in Venezuela, a Socialist haven, where because of Socialism, the people are eating their own pets, including dogs.

The meme contains a picture of Ocasio-Cortez with the text, “Why are you so afraid of a socialist economy?”

Beneath her image is President Donald Trump with text saying, “Because Americans want to walk their dogs, not eat them.”

And it is, unless you are actually living in those conditions.

However, the woman that can’t seem to answer a question rationally or logically with a solution that is understandable shot back at Trump Jr. with a veiled threat.

While she tries to backpeddle and claim that she is talking about Congress, it’s clear in her haste that she is claiming to be a member who will have subpoena power. Thus, she is issuing a direct threat against Trump Jr.

While she gets it right in the end, the fact that she was stupid enough to even voice such stupidity on Twitter adds to her growing volume of moronic clips.

However, according to The Gateway Pundit, she may have engaged in ethics violations for threatening Trump Jr with retaliation over the meme.

According to — 42 U.S. Code § 1983 – Civil action for deprivation of rights
Every person who, under color of any statute, ordinance, regulation, custom, or usage, of any State or Territory or the District of Columbia, subjects, or causes to be subjected, any citizen of the United States or other person within the jurisdiction thereof to the deprivation of any rights, privileges, or immunities secured by the Constitution and laws, shall be liable to the party injured in an action at law, suit in equity, or other proper proceeding for redress, except that in any action brought against a judicial officer for an act or omission taken in such officer’s judicial capacity, injunctive relief shall not be granted unless a declaratory decree was violated or declaratory relief was unavailable.

Ouch! She clearly did that, but the question is does this apply to representatives-elect? Personally, I don’t see why it shouldn’t apply to her. Ocasio-Cortez has already told us she isn’t going to keep their oath of office on several fronts. Perhaps we should deal with Ocasio-Cortez before she can even take the oath and have her impeached or recalled.

However, Ocasio-Cortez is not the only congresswoman-elect to have engaged in ethics violations.

Michigan’s 13th District Representative-elect Rashida Tlaib, who draped herself in the Palestinian flag after winning her seat, has also engaged in ethics violations by failing to name George Soros as the source of money she took in and lying about the amount he gave.

Congresswoman-elect Rashida Tlaib (D., Mich.) did not disclose the name of the source of funds for a fellowship that was paid by liberal billionaire George Soros—as required by the House ethics committee—and also disclosed a lesser amount than she received, according to a review of tax and financial disclosure forms.

An expenditure of $85,307 to Rashida Tlaib in Detroit, Mich., from 2017 is shown on page 97 of the 321-page report to “to increase involvement of disenfranchised urban communities of color with their local governance process by creating a community benefits strategy for equitable development and creating a leadership training for impacted residents focused on negotiation skills and identifying leverage at the local level.”

Tlaib did not report any income in the amount of $85,307 on financial disclosure forms submitted as she was running for office, which identified the names of the sources that provided her income in three of four cases. Tlaib received compensation from the Maurice & Jane Sugar Law Center, Wayne State University, and Metro Solutions, the forms show.

However, the fourth reported source of earned income is marked as a “Leadership in Government Fellowship,” but does not identify who provided the payment.

A press release from 2016 shows that Tlaib was chosen for a “leadership in government” fellowship by Soros’s Open Society Foundations along with seven other individuals.

“The eight fellows, chosen from the senior ranks of federal, state, and local government, will work on a wide variety of issue areas: devising new ways to bring criminal justice reform to local prosecutors’ offices; developing new strategies for helping school children exposed to trauma; improving life outcomes for low-wage workers, immigrants, and boys and men of color; and closing the digital divide, and more,” the release reads.

According to the manual on financial disclosure statements from the U.S. House of Representatives Committee on Ethics, page 11 reads, “Identify the source by naming the organization, corporation, or other entity making the payment. It is not necessary that individual clients of a business be named, only the business itself. For example, on Schedule C, an editor would report the name of the publishing firm as the source of earned income, not the clients for whom the work was performed. Describe the type of income as salary, commissions, fees, pension, etc., as appropriate.”

However, the Free Beacon adds:

The $68,307 income marked for the “Leadership in Government Fellowship” on the financial disclosure forms is also $17,000 less than the $85,307 that was marked as being paid out by Soros’s group.

Jonathan Kaplan, the communications officer for the Open Society Foundations, responded to the Free Beacon’s request for comment.

“Rashida Tlaib was awarded a Leadership in Government fellowship from the Open Society Foundations in the fall of 2016. Her project: to focus on increasing the civic participation of disenfranchised urban communities of color. When Ms. Tlaib informed us that she was planning to run for Congress, we mutually agreed to suspend her fellowship and no further payments were made.”

That still doesn’t explain why she lied about the money and failed to disclose the source.

Funny how Ocasio-Cortez is also tied to George Soros.

Boy, Michigan and New York, you guys really know how to pick ’em.