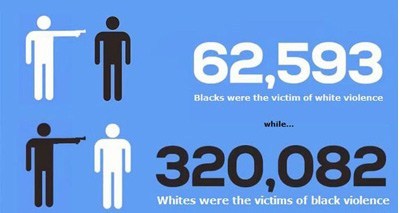 They want White people to pay reparations to Blacks?

How about they agree to stop killing us first?

The fact is that blacks disproportionately commit more violent crimes than other racial groups in America.

In the book Hate Crime Hoax: How the Left is Selling a Fake Race War, we learn an unsettling truth seemingly invalidating the title of the book — 82 to 85 percent of interracial crime involving white and black people is black on white violent crime:

There is an astonishing level of consensus, at least among scholars, on the fact that almost all of the interracial crime that does occur in the United States is POC-on-white. In the representative year of 2008, 429,000 Black-on-white violent crimes and only 91,000 white-on-Black violent crimes were recorded by the FBI, and the proportional breakdown of interracial offenses by race was nearly identical during 2012 and 2015.

The FBI data would seem to indicate a race war is actually taking place, albeit an undeclared one, when 82.5 percent to 85 percent of interracial crime involving white and black people is black-on-white violent crime.

Yes, even Tim Wise is capable of admitting the truth about interracial violent crime. It’s almost exclusively black on white.

Which brings us to this piece by Heather Mac Donald, where she notes the Bureau of Justice Statistics 2018 survey of criminal victimization shows black on white violent crime is increasing, as she writes, “Blacks committed 537,204 of those interracial felonies, or 90 percent, and whites committed 56,394 of them, or less than 10 percent.”[A Platform of Urban Decline: Democratic presidential candidates believe America is racist, yet they ignore the evidence on crime and ensure that racial disparities persist., City Journal, September 23, 2019]:

Just this month, the Bureau of Justice Statistics released its 2018 survey of criminal victimization. According to the study, there were 593,598 interracial violent victimizations (excluding homicide) between blacks and whites last year, including white-on-black and black-on-white attacks. Blacks committed 537,204 of those interracial felonies, or 90 percent, and whites committed 56,394 of them, or less than 10 percent. That ratio is becoming more skewed, despite the Democratic claim of Trump-inspired white violence. In 2012-13, blacks committed 85 percent of all interracial victimizations between blacks and whites; whites committed 15 percent. From 2015 to 2018, the total number of white victims and the incidence of white victimization have grown as well.

Read the rest at unz.com…

There is no doubt that the young black thug culture is thriving in America and Democrats are, of course, glad to stoke the fire.

The reality is that blacks are not as victimized as Democrats want them to think they are.

Slavery was a terrible thing.

Slavery also ended long before any of us were born.

Still, we see every day that young black thugs are ready and willing to get revenge for what happened over a century ago.

That man refused to give them $1, we would later find out.

That’s what happens when you refuse to pay reparations Whitey.

As long as Democrats continue to push racial hate, they will continue to inspire and ruin the lives of many young black men and women who could do so much better for themselves.

Let go of the hatred America.