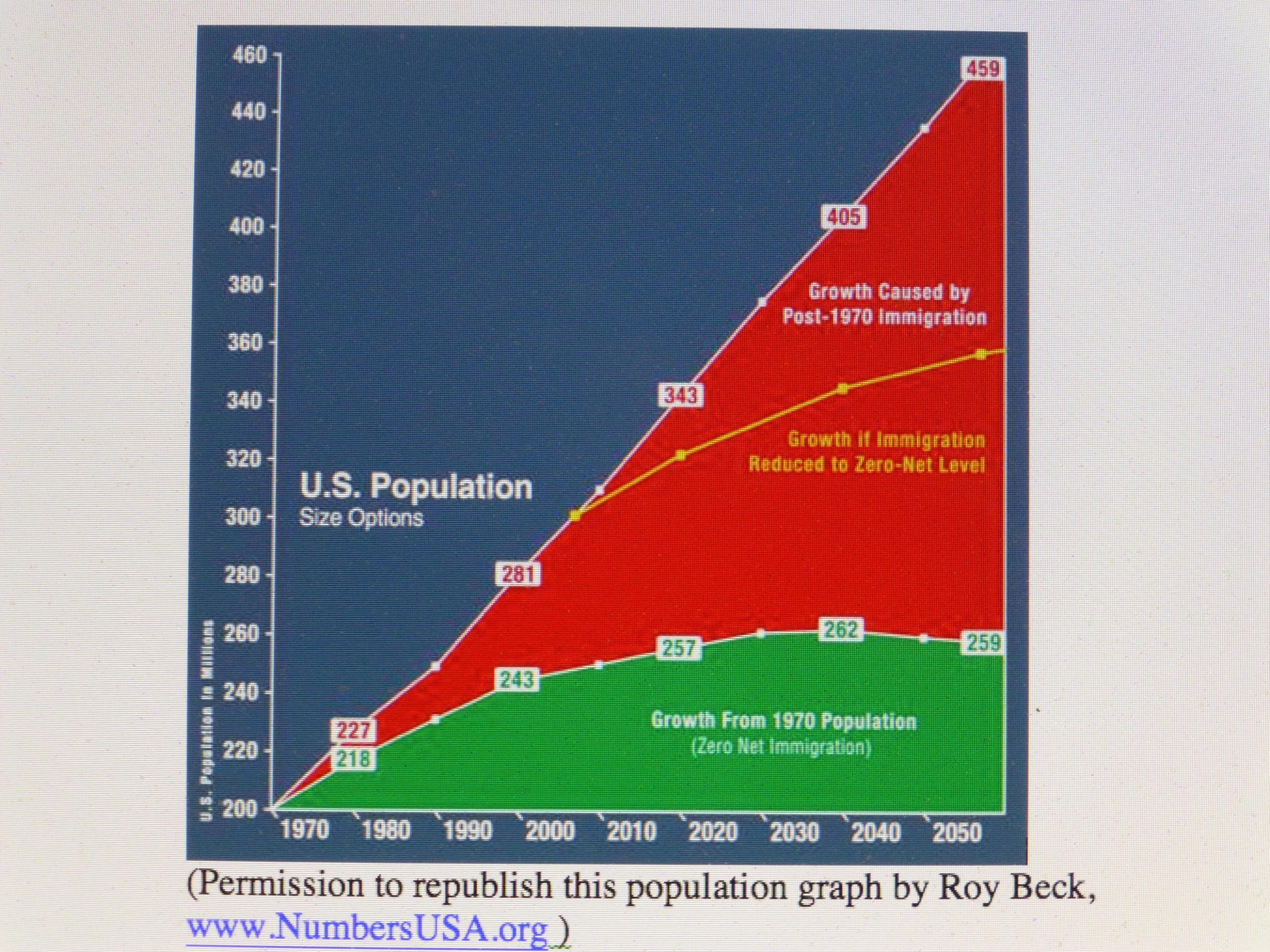 Few want to address the single most ominous issue facing America in the 21st century. This dilemma threatens every American who will be alive in 2050. It will affect persons of every race, creed and color. It will affect the rich, poor and in-between. Nobody, and I mean, NOBODY, will escape its consequences.

Yet, few want to talk about this problem. Few politicians respond to its implications. Not one single TV network will pursue it. The Mainstream Media avoids it at all costs. Governors dodge it. Big city mayors from Chicago, New York, Los Angeles, Miami, San Francisco, Seattle, Detroit, Denver, Houston and Phoenix—will not whisper a word about it.

No matter how snarled and gridlocked our cities around this country, and even the world, or how polluted our air, or poisoned our oceans, or the chaos of the “Sixth Extinction Session”, or, dare I say it, “Catastrophic Climate Destabilization”, not one single world leader will address it. And, religious leaders arrogantly continue promoting it.

Everybody knows what’s driving it, but most remain fearful of uttering a single word or pointing a finger. Why? They will be called the R-word, N-word, X-word.

But these facts cannot be called any names. They’re just facts. And, these facts threaten the foundation of America’s future.

According to the U.S. Census Bureau, Pew Research Center, Fogel/Martin “US Population Projections”, www.NumbersUSA.org, and other research organizations—the United States accelerated from 200 million people in 1965 to 300 million people in 2006, to 330 million in 2020 and we are projected to reach 440 million people, by 2050. If we maintain our current path, we will reach 625 million by 2095.

That means, we face the consequences of adding 110,000,000 (million) more people, net gain, within 30 years. Yet, you won’t hear a word from any leader in America. A few hundred top experts like Leon Kolankiewicz, Fred Elbel, Marylou Tanton, Tim Murray, Dan Stein, Roy Beck, Brenda Walker, Paul Nachman, Valerie Price, Glen Colton, Paul Ehrlich, E.O. Wilson, Kathleene Parker, Jason Brent, Bob Dane, John-Debbie Rohe, Dave Gardner, Dave Paxson, Bromwell Ault and dozens of others write books, speak out and present their cases to every media organization in America. But, to no avail. You will not see any of the media educating or alerting the American people. You will not see any contingency plans. You will not see any preventive plans.

Ironically, their children will be caught in this demographic “Catch 22” like the rest of us. And, all the big corporate leaders silence anyone who speaks up. We’re blocked from 60 Minutes, Face the Nation, Meet the Press, Talk of the Nation on NPR and PBS. We’re blocked from CNN on down the line. Radio show hosts flee this topic.

At some point, America will race past the tipping point of sustaining our overloaded cities and entire U.S. population. Author Chris Clugston in his latest brilliant book, Blip: Humanity’s 300-year self-terminating experiment with industrialism, said we face running out of all the metal-minerals that facilitate and power our massive cities and supply routes. When? He states that we face certain collapse by 2050. The book proves sobering if not terrifying as to his extraordinary research and triangulation of what we face in 30 years.

The single greatest source of power in the world, oil, will be exhausted in this century. Probably in 2050, give or take a few years. Once that happens, how do you feed 10 billion people on this planet? There’s no viable alternative energy on the horizon to replace oil. Walter Youngquist, energy expert, said it best, “As we go from this happy hydrocarbon bubble we have reached now to a renewable energy resource economy, which we do this century, will the “civil” part of civilization survive? As we both know there is no way that alternative energy sources can supply the amount of per capita energy we enjoy now, much less for the 10 billion expected by 2050. And energy is what keeps this game going. We are involved in a Faustian bargain—selling our economic souls for the luxurious life of the moment, but sooner or later the price has to be paid.”

What’s driving our overpopulation juggernaut? We all know: legal and illegal immigration, their birth rates and chain migration. Last year, 2019, over 3.1 million immigrants penetrated America, legal, illegal and their birth rates. Why? They fled their own overpopulated countries. Note that American women of all colors averaged 2.03 children per woman since 1970. It’s not us doing to ourselves, but our U.S. Congress doing it to us. And Congress will not stop the deluge.

In the name of common sense, why? What makes any of them think they enjoy immunity? The immigration issue has been front and center for 30 years. Instead of correcting it and stopping the invasion, Congress does nothing to secure our borders. The big money people and pompous politicians must think they and their children will be immune as to adding another 110 million people within 30 years.

Our problems will become irreversible and unsolvable. If you’ve traveled through China, India or Bangladesh—you know what I’m talking about. If you’ve stepped into Mexico City, Hong Kong, Tokyo, Sao Paulo or New York City—you have a taste of what we face. Cities of over 10-20 million create chronic madness of crime, poverty, misery, mental instability, drug addiction, homelessness and worse. Air pollution, water contamination, degradation of Nature, and hopelessness abound. Notice all the sickness and human depravity on such programs as “Criminal Minds”; “Special Victims Unit”; “NCIS” and many more.

Our water shortages will become acute and dangerous. Our energy consumption will create horrifically polluted skies, acid rain and contaminated soils. Our arable land will diminish as we destroy wilderness and accelerate species extinction of all our fellow creatures. Gridlocked traffic will paralyze our cities because 110 million people means a doubling of our 35 most populated cities. Quality of life and standard of living will drop like a brick in water. You will need a lottery ticket to visit our national parks. The cost of living will explode through the roof. I could name another two dozen consequences that few think about.

Just think of the sociological, racial, linguistic and religious impacts of adding 110 million people with hundreds of different world views, religions and cultures. We’re looking at fracturing and fragmenting America into hundreds of different ethnic enclaves—all in conflict with one another.

Are you asking any of these questions of your senators, House member, mayor or governor? What kind of a civilization are we bequeathing to our children? How can we change course? What about “carrying capacity” study for every city? What about a “population stabilization policy” for every city and state according to its water, land and resources? How can you save the future for your children?

Dear reader, what are your concerns and solutions? Write me, frostyw@juno.com , and I will bring them to the American public. We’re all in this together. We all need to take action if the United States of America hopes to survive the 21st century.