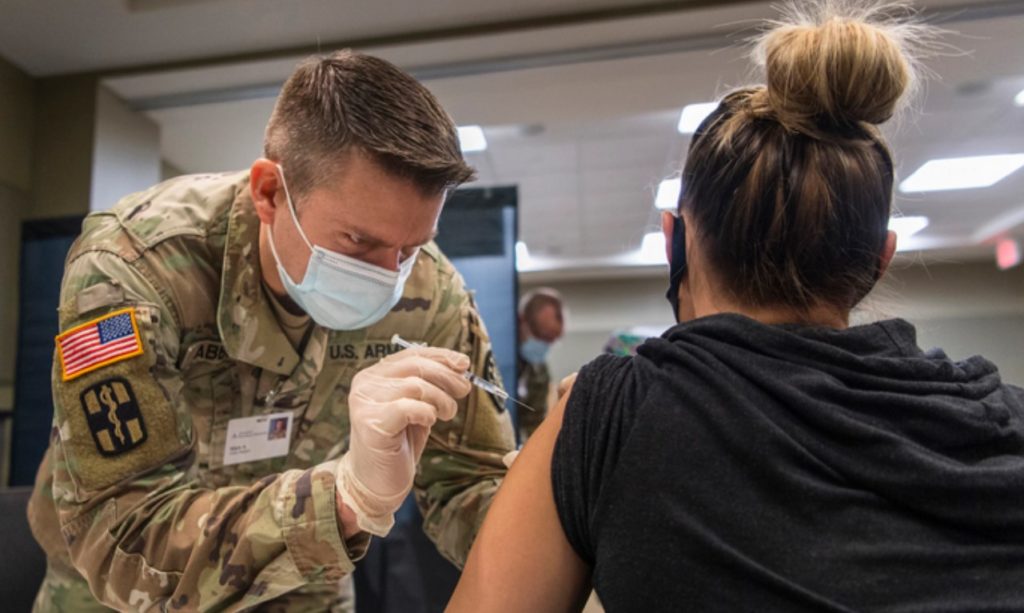 Up to 40,000 Army National Guard troops – around 13% of the force – could be fired for not getting the mandated COVID-19 vaccine (which has limited efficacy against Omicron, doesn’t stop transmission, has been linked to elevated heart problems, and has been mandated for a healthy demographic that rarely dies of the disease).

Guard soldiers have until Thursday to get the jab, according to the Associated Press, which notes that between 20% and 30% of Guard soldiers in six states remain unvaccinated.

“We’re going to give every soldier every opportunity to get vaccinated and continue their military career. Every soldier that is pending an exemption, we will continue to support them through their process,” Lt. Gen. Jon Jensen, director of the Army National Guard, told AP. “We’re not giving up on anybody until the separation paperwork is signed and completed. There’s still time.”

Last year, Defense Secretary Lloyd Austin ordered all service members to get the vaccine, with different branches maintaining different deadlines for the jab. The Army National Guard was given the maximum amount of time, largely because its roughly 330,000 soldiers are scattered throughout the country, including remote locations.

The Army Guard’s vaccine percentage is the lowest among the U.S. military — with all the active-duty Army, Navy, Air Force and Marine Corps at 97% or greater and the Air Guard at about 94%. The Army reported Friday that 90% of Army Reserve forces were partially or completely vaccinated.

The Pentagon has said that after June 30, Guard members won’t be paid by the federal government when they are activated on federal status, which includes their monthly drill weekends and their two-week annual training period. Guard troops mobilized on federal status and assigned to the southern border or on COVID-19 missions in various states also would have to be vaccinated or they would not be allowed to participate or be paid. -AP

Complicating matters is a rule that Guard soldiers deployed on state active duty may not require a vaccination, depending on state-level mandates.

According to the report, at least seven governors have asked Austin to reconsider, or drop, the vaccine mandate for National Guard members – with some having filed or joined lawsuits to that end.

Austin, apparently following his own special brand of science, told them to pound sand, saying that Covid-19 “takes our service members out of the fight, temporarily or permanently, and jeopardizes our ability to meet mission requirements,” adding that troops will either need to get vaccinated or lose their Guard status.

“When you’re looking at, 40,000 soldiers that potentially are in that unvaccinated category, absolutely there’s readiness implications on that and concerns associated with that,” said Jenson, adding “That’s a significant chunk.”

AP reports that around 85% of Army Guard soldiers are fully vaccinated, while 87% are at least partially vaccinated.