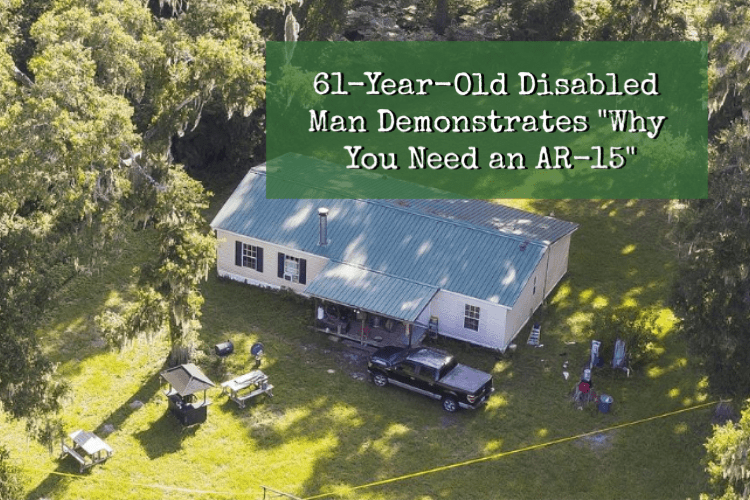 How many times have you seen a gun control debate in which someone chimes in, “Nobody needs an AR-15. What are you going to do, hunt deer with it?” It’s been a busy year for gun control advocates, passing draconian law after draconian law.

Sometimes it’s part of a heartfelt essay, like this, which is just another essay where a man bloviates about his views on high-velocity weapons.

There is no place for high-velocity weaponry in the hands of the citizenry. No number of lengthy oratories by National Rifle Association leadership and pandering politicians will ever justify the deaths this nation has already endured. “Every Marine a Rifleman” is an adage for Marines, not for civilians. We are no longer under the oppressive rule of a foreign king, and it is folly to think that by keeping civilians from such weapons that we risk our republic. We risk nothing more than offending the bloated gun lobby in Washington. But by doing nothing, we continue to risk our children’s lives. (source)

The author of that piece feels that since a pistol isn’t a match for an AR-15, nobody but police and military should be allowed to have one.

But that’s exactly why we should be able to own guns like AR-15s.

A disabled gentleman in Summerfield, Florida demonstrated exactly why one needs an AR-15 last Wednesday when he handily dealt with four home invaders who thought he was a soft target.

Sgt. Micah Moore found Doyle with a gunshot wound and a shotgun next to him on the ground. Deputies entered the home and found Jackson dead on the dining room floor. Detectives said he was wearing a “Jason” mask on top of his head, gloves on both hands, jeans and a black shirt.

Near Jackson’s head was a semi-automatic pistol, detectives said.

Continuing into the home, deputies found the 61-year-old homeowner in a bedroom.

He had an AR-15 rifle on his legs and was bleeding from a gunshot wound to the stomach, according to sheriff’s officials. Doyle and the homeowner were transported to Ocala Regional Medical Center, where Doyle died.

Deputies continued to search the area.

Deputy Austin Coon and K-9 Deputy Alberto Gago, with his dog Nitro, found Rodriguez and Hamilton in the 15000 block of Southeast 36th Avenue, according to arrest reports. Rodriguez was hiding in tall grass on the side of the road.

I’ll bet they were sweating when they discovered how outmatched they were. Here’s what went down. Police have opted not to name the brave homeowner.

The homeowner told Detective Travis O’Cull that, about an hour before the shooting, a male who he barely remembers from a past Craigslist transaction, knocked on the front door, according to sheriff’s officials.

The homeowner said he did not open the door but saw the male peering through a back sliding-glass door. He said he asked the male what he was doing and was told he needed help with his vehicle.

The homeowner said he told the individual he was disabled and couldn’t help him. That person then left and [the] homeowner went to sleep.

The homeowner told the detective he was awakened by a loud noise and grabbed his AR-15, which was near his bed. He saw a masked person inside the home, he said, and he and the intruders exchanged gunfire. He said he shot at the man in the mask and at a second person coming toward him.

The homeowner said it was Jackson who shot him. (source)

If ever there was a case for being ready to defend one’s home, this is it.

The other two suspects were interviewed and then placed under arrest.

Two of the four of the suspects have criminal records. Local police say that the homeowner faces no charges and that he’s done nothing to prevent him from owning guns. He is in stable condition, recovering at the hospital.

Here are the mug shots of the alleged home invaders.

Are you prepared to defend YOUR home?

I’ve written before about why preppers need guns, but it’s important to note that you need guns in good times too if you intend to defend yourself. This story is a perfect example of why. There’s no ongoing disaster or SHTF event happening in Summerfield, Florida. It was just an ordinary night in July…until 4 people allegedly decided to invade an innocent man’s home.

If the homeowner had not had greater firepower, this story probably would have had a very different ending. Imagine taking on 4 armed home invaders with a Glock.

And this, ladies and gentlemen, is why people actually do need AR-15s. We must be prepared to defend our homes and our families because when you need the police in seconds, they’re only minutes away.