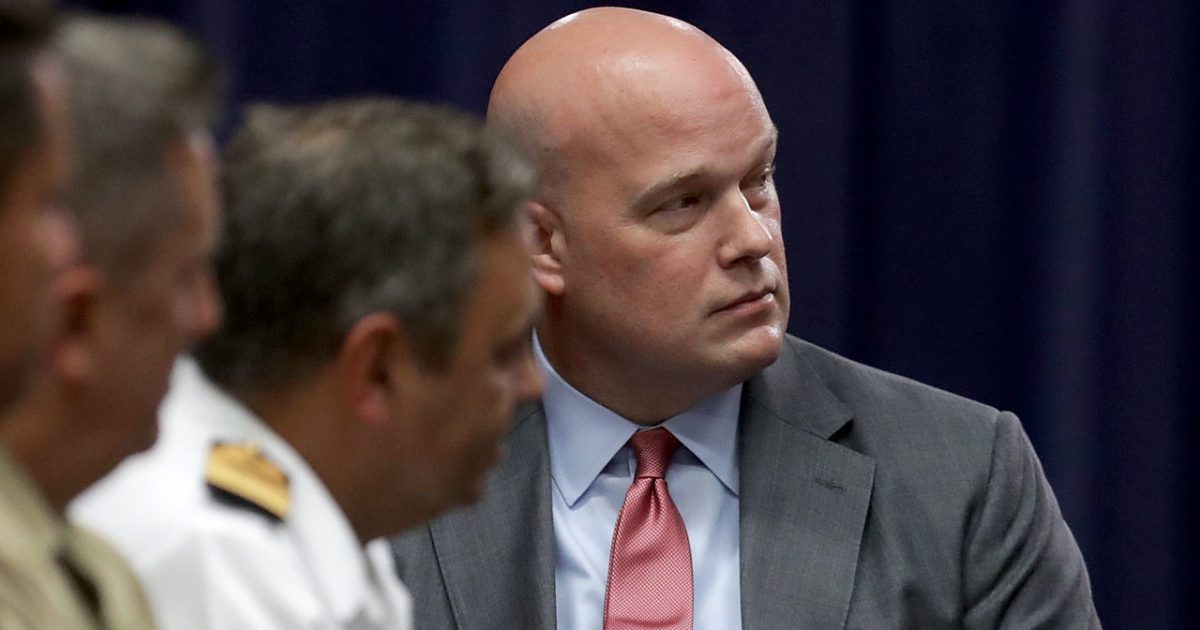 Acting Attorney General Matthew Whitaker’s comments on states’ rights to nullify unconstitutional federal laws have come under attack this week, but he is taking the position of our founders by advancing nullification.

For those unaware, nullification is rooted in the Tenth Amendment to the Constitution, which plainly states that if the states, who are the creators of the federal government, have not specifically given them authority, that authority rests with the states and the people of the state.

The powers not delegated to the United States by the Constitution, nor prohibited by it to the States, are reserved to the States respectively, or to the people.

“‘Nullification’ was a legal argument made by Southerners before the Civil War who believed their states could ‘nullify’ federal law. That argument was discredited after their defeat in the Civil War, but it was made again by racists opposing desegregation. And now by Whitaker.”

The War of Northern Aggression did not discredit that argument. In my opinion, it was simply the result of the South not cutting the head off of the snake in DC and destroying the tyrant, Abraham Lincoln.

However, winning a war does not make one’s position right or wrong.

Yet, what Renato Mariotti forgets is to actually go back and understand the Constitution and the founding fathers, particularly Thomas Jefferson.

. Mariotti’s version reads like a third-grade essay, with a dash of Orwell.

On my podcast the other day I smashed Mariotti’s little lecture to smithereens.

In a later Tweet he berated Whitaker for his disparagement of judicial review.

Warned Mariotti: “The government could pass a law imprisoning journalists and no court could review it.”

Well, guess what: the government did pass a law like that, in 1798, and a lot of good the Court did. It was only at the state level that a spirit of resistance could be found.

Even if the Court had reviewed the law, what is the chance a bunch of robed Federalists were going to overturn the Alien and Sedition Acts?

And that, according to James Madison in the Report of 1800, is why we have state nullification: when the three branches of the federal government betray us — yes, even the demigods of the Supreme Court — the states have the final say.

I guarantee you did not come across this passage in school, at any level:

The resolution [the famous Virginia Resolutions of 1798] supposes that dangerous powers, not delegated, may not only be usurped and executed by the other departments, but that the judicial department also may exercise or sanction dangerous powers beyond the grant of the Constitution; and, consequently, that the ultimate right of the parties to the Constitution [“the parties to the Constitution” are the states], to judge whether the compact has been dangerously violated, must extend to violations by one delegated authority, as well as by another; by the judiciary, as well as by the executive, or the legislature.

However true, therefore, it may be, that the judicial department, is, in all questions submitted to it by the forms of the Constitution, to decide in the last resort, this resort must necessarily be deemed the last in relation to the authorities of the other departments of the government; not in relation to the rights of the parties to the constitutional compact, from which the judicial as well as the other departments hold their delegated trusts.

What Madison means in the second paragraph above is that while the judicial branch may be considered the final authority on constitutionality between itself and the executive and legislative branches of the federal government, it is not the final authority between itself and the states. The states, holding the initial repository of power and the architects of the whole system, are of course the ultimate voice.

It’s more than that. As commentator and pastor Matt Trewhella, author of The Doctrine of the Lesser Magistrates

Whitaker stated in a 2013 political speech: “As a principle, it has been turned down by the courts and our federal government has not recognized it. Now we need to remember that the states set up the federal government and not vice versa. And so the question is, do we have the political courage in the state of Iowa or some other state to nullify Obamacare and pay the consequences for that?”

He went on to add: “The federal government’s done a very good job about tying goodies to our compliance with federal programs, whether it’s the Department of Education, whether it’s Obamacare with its generous Medicare and Medicaid dollars and the like. But do I believe in nullification? I think our founding fathers believed in nullification. There’s no doubt about that.”

CNN brought in “expert” – University of Texas law professor and CNN contributor Stephen Vladeck to rebut Whitaker. Vladeck stated, “It’s irreconcilable not only with the structure of the Constitution, but with its text, especially the text of the Supremacy Clause of Article VI—which not only makes federal law supreme, but expressly binds state courts to apply it. For someone who holds those views to be the nation’s chief law enforcement officer, even temporarily, is more than a little terrifying.”

The average ignorant American will believe Vladeck. But if they weren’t too lazy to pick up a Constitution and read Article VI, they would realize that Vladeck’s assertions are utterly false. Article VI does not make “federal law supreme,” rather it declares the Constitution itself to be supreme. All federal law must comport with the Constitution – or the states should resist it. Nor does Article VI bind the state courts to uphold unconstitutional federal laws – not to mention unjust or immoral laws.

CNN paid homage to Vladeck’s judicial supremacy by stating in the article: “Whitaker also said he believed that the courts were the inferior branch of the federal government, calling into question one of the most consequential rulings in Supreme Court history, Marbury vs. Madison, the 1803 case which established the power of federal courts to determine whether decisions or laws taken by by the President and Congress are constitutional.”

The truth is – the courts were the inferior branch – all the founders recognized this – nor did Marbury vs. Madison establish judicial supremacy. Whitaker properly stated, “It is completely fraught with peril for 200 years of history and Marbury vs. Madison and the fact that the courts have become more powerful even though they’re supposed to be the inferior branch. They have become more powerful than the other two branches because the other two branches lack political courage to stand up,” he said.

CNN even tried to dismiss nullification and interposition by bringing up the old strawman arguments of South Carolina and John Calhoun back in the 1830’s.

Whitaker made many solid statements in his speech cited by CNN. We need to point people to these statements and use CNN’s attack upon them as a teachable moment.

“But the federal government is smart. What have they done? They attach strength. They don’t just pass a law and mandate a state does something. They say we really want you to expand Medicaid, for example, and then we put strings attached, that we’re going to pay for 95% or whatever the percentage — just pay a little bit. And so I think nullification would be a brave and bold political act of our state leaders. I don’t see that across the nation as I look at who we elect to statewide office.”

It is the duty of the representatives of the state not to remain cozy and comfortable next to a tyrannical federal government, nor employ the enemies tactics that believe tyranny can be resolved with amendments and an Article V convention, but they are to nullify unlawful laws from DC and if need be, interpose themselves between the beast and the people they serve.

Whitaker is right and it’s actually refreshing to hear it coming from an Attorney General. I hope he will stay the course!

For more on the subject of Nullification, I recommend articles that can be found here.