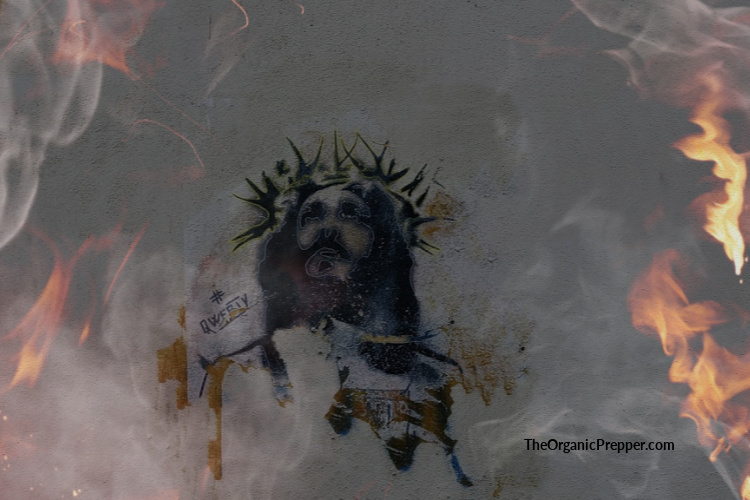 If you were unconcerned about the wholesale toppling and defacement of statues because it didn’t affect you, the most recent call to action by a prominent activist might get your attention.

Shaun King, a prominent civil rights activist, believes that all depictions of Jesus that show him as white should be taken down.

If you’re wondering whether King was only talking about statues of Jesus, let’s be perfectly clear. He’s talking about all depictions of Jesus as white.

King believes that the depictions of Jesus were white so that white people would follow Christianity.

A tweet by Jenna Ellis, a lawyer representing President Donald Trump, warned that she would “not break” if “they try to cancel Christianity,” although it’s unclear if it was in direct response to King’s tweet. Regardless, King responded that the lawyer was “actually defending here is her whiteness.”

“Christian whiteness needs white Jesus,” King tweeted to Ellis. “It’s not about generosity or kindness. It’s not about protecting the vulnerable. It’s about whiteness itself. Attack white Jesus to her, and you attack her faith.” (source)

King is very influential in the black activist community. It wouldn’t be at all surprising if this discussion unleashes another wave of vandalism.

The mob, which started out by toppling statues of Confederate leaders and slave owners, has been anything but rational. (Selco talked more about mobs here.) Any statue they see is fair game if it depicts a white man. They’ve toppled and defaced statues like the one of Ulysses S. Grant in San Francisco, apparently not realizing he was the leader of the army that opposed the confederacy. They defaced the statue of Miguel Cervantes, the author of the iconic book, Don Quixote. Here’s a quote from a translation of Don Quixote.

“Freedom, Sancho, is one of the most precious gifts that heaven has bestowed upon men; no treasures that the earth holds buried or the sea conceals can compare with it; for freedom, as for honour, life may and should be ventured; and on the other hand, captivity is the greatest evil that can fall to the lot of man.” (source)

It’s also interesting to note that Cervantes himself was enslaved for five years after he was captured by pirates and taken to Algiers. But, hey, he’s gotta go according to the mob.

Are they coming for Jesus next?

But now will they be motivated by Shaun King to come after the Church? Will they next turn their attention to cathedrals and stained glass windows and simple country churches with religious icons?

If they do, many people who strongly believe in the fight for racial equality will withdraw their support. Let me be perfectly clear when I say that I abhor racism, bigotry, and hatred of any kind. And that includes when this kind of wrath is turned on innocent people instead of toward the people who caused the problem in the first place. I support peaceful resolution and with the right leadership, I still believe that is possible.

This is not the right leadership.

All we have now is destruction and violence and I don’t support that. Nor do many others who were outraged by the death of George Floyd. Remember him? The man this was all supposed to be about?

Will it even matter if those who would have once been allies withdraw their support?

These groups are now extremely well-funded. Activist groups dedicated to racial equality have been given money hand over fist recently by companies that want to virtue signal to the socially acceptable level. PNC Bank pledged a billion dollars to the fight against systemic racism. Toby Cowern recently wrote about the significance of changing the name of the CHAZ to the CHOP and pointed out how many people who took part in the original Occupy movement were now in positions of power that could funnel a lot of money to causes they hold dear. When asked about this most recent outrage, he said:

I think we are at the stage of realizing whatever demands are acquiesced to will never be enough. This is where pushback begins.

So I don’t think that going after the Church is as farfetched as it might seem.

This would escalate excessively high tensions to an entirely different level. Currently, cities are being looted, vandalized, and burned and nobody is doing much of anything about it. The police departments and National Guard have been ordered to stand down. When churches begin to be destroyed and religious icons damaged, will that evoke a response?

I think it will. I’d be stunned if the Christian community did not respond with fury in the event churches began being widely vandalized in the name of racial equality. I think this would unleash an unprecedented amount of civil unrest and that we should strive to be prepared for it.

We’re in for some “interesting times” as the Chinese curse says.

And that’s where this summer turns a whole lot hotter.

After the “eventful” year we’ve had so far, everyone has been wondering what July of 2020 would bring. It just might bring the Crusades to the United States of America.