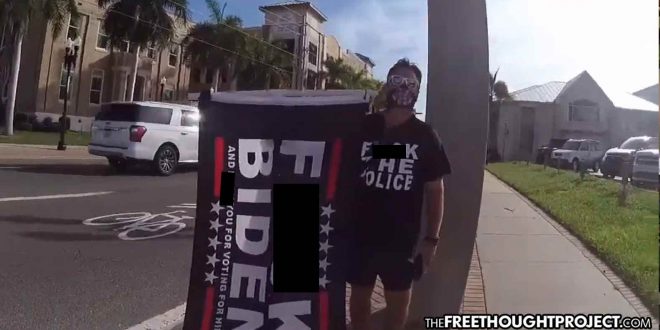 In the land of the free, freedom of speech has long been under attack and it is a bipartisan effort. Many of those complicit in the quelling of free speech are merely useful idiots and have no idea they are participating in one of the most effective forms of censorship humanity has ever seen.

All people have to do to silence anyone with whom they disagree is to now claim their speech offended them or that it’s misinformation and that person is banned or suspended from social media, or, in some extreme instances, face legal action.

Telling people what words they can and can’t say to ‘protect’ others is chilling and nothing short of tyrannical. Freedom of speech does not come with terms and conditions as words alone, less the obvious yelling “fire” in a movie theater, cannot cause physical harm.

If you need the state to ban or arrest people to protect you from the offensive or even outright false information they are spreading, you are a far greater threat than they are. If you support the state doing so, you’re a fascist. It is that simple.

Luckily, there are people who can see outside of this overt attempt to control what people can and cannot say and are taking action to call it out. TFTP spoke to one of these individuals who is currently being persecuted for nothing other than his speech. Andrew Sheets is an advocate for freedom and his activism has put a target on his back.

In June of this year, the city of Punta Gorda received backlash from constitutional advocates after they passed an ordinance banning language they consider “obscene.”

When reading the law, it is hard to interpret it any other way than a direct affront on free speech as it specifically outlaws anything “obscene” and then names the mediums it can be on like signs or flags.

The City’s new Sign Code prohibits outright any sign which contains obscene language or graphics. Section 11.4(a)(42), Punta Gorda Code defines the term “obscene” to mean “language or graphics that depict or describe sex or sexual organs in a manner appealing to, or intended to appeal to the average viewer/reader’s visceral sexual (prurient) interests, and taken as a whole, lacks any justification from a political, literary, artistic, or scientific value.”

Note, the definition of “sign” under the new Sign Code includes, “any device, structure, item, thing, object, fixture, painting, printed material, apparel and accoutrements, or visual image using words, graphics, symbols, numbers, or letters designed or used for the purpose of communicating a message or attracting attention.” As defined, flags are included in the definition of signs as are hats and other worn accessories.

Last week, Sheets, who runs Charlotte County Copwatch, along with YouTuber Richard Massey, were prosecuted under this new code. Sheets tells TFTP that prosecutors attempted to fine him $10,000 but they managed to get it down to $2,500. What did Sheets’ sign say that was so “offensive” that prosecutors wanted to steal $10,000 from him? It said, “F**k Biden.”

The city decided to prosecute him under the portion of the code which bans graphics or language that “depict or describe sexual or excretory activities or organs in a manner that is offensive as measured by contemporary community standards.”

The idea that Sheets’ sign saying “F**k Biden” literally meant that he was advocating sexual intercourse with the President would be laughable if it wasn’t accompanied by such overzealous prosecution.

Aside from this citation being clearly asinine and targeted, it’s well-established by the Supreme Court to be unconstitutional.

In Cohen v. California, the U.S. Supreme court upheld a citizen’s First Amendment right to wear a jacket to court that read “F**k the Draft,” the court held:

“For, while the particular four-letter word being litigated here is perhaps more distasteful than most others of its genre, it is nevertheless often true that one man’s vulgarity is another’s lyric. Indeed, we think it is largely because governmental officials cannot make principled distinctions in this area that the Constitution leaves matters of taste and style so largely to the individual.”

“(The use of language) is very important and that’s why these men are out holding these signs because they have issues with the constitutionality of this ordinance,” attorney Phares Heindl, who represents both men said. “There are plenty of commonly used (phrases) with ‘F—’ that don’t have any sexual connotation like ‘F- — off,’ ‘What the f—, ‘F—ing idiot.’

“You don’t think when using those words people are trying to get out a description of sex.”

However, one of the Punta Gorda board members disagrees and noted that because people find the word “f**k” offensive, Sheets and Massey deserve to lose their First Amendment right to free speech.

“The word offensive in the last line (of the ordinance definition) is where everybody is heading so ‘What the f—’ may be offensive to most of the people in this room,” board member Edward Weiner said, according to YourSun.com. “It may not be offensive to the two bozos sitting here.”

Because asserting your freedom of speech makes one a “bozo,” right, Weiner?

“The city is trying to censor my protest speech by banning words and phrases it considers indecent but these words express the depth of my anger and frustration with the government, and I believe it is my duty as a citizen to confront this attempt to take away our freedom of speech,” Sheets said.

“Yes, I use strong words,” he continued, “but that is because of how bad the corruption is and how strongly I oppose the city’s attempt to deprive us of our constitutional rights.”

“It’s our right to express ourselves through speech of any type with minor limitations,” Massey said. “Free speech does not have a limitation, whether it’s on paper or on speech. It’s all covered by the First Amendment.”

“Yes, I use strong words,” he continued, “but that is because of how bad the corruption is and how strongly I oppose the city’s attempt to deprive us of our constitutional rights.”

“It’s our right to express ourselves through speech of any type with minor limitations,” Massey said. “Free speech does not have a limitation, whether it’s on paper or on speech. It’s all covered by the First Amendment.”

As YourSun.com reports, both Sheets and Massey are expected to pay the fines, as well as case costs of $7.41 per citation, within 10 days of last Wednesday’s meeting.