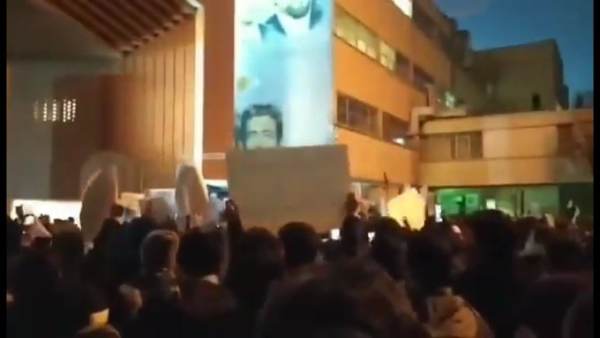 After the Iranian military admitted to shooting down a Ukrainian passenger jet, killing 176 innocent people, there are protests calling for Ayatollah Ali Khamenei to step down.

Kashimira Gander has the story:

Protesters in Iran are demanding that Supreme Leader Ayatollah Ali Khamenei steps down, after the country’s military admitted to accidentally downing a Ukrainian passenger jet, killing all 176 people on board.

On Saturday afternoon, thousands of people gathered in Tehran’s main squares as meetings organized on social media to mourn the dead transformed into protests against the military’s mistake, The New York Times reported. Chants in videos seen on social media by the newspaper included “Death to liars!”, “Death to the dictator!” and “You have no shame.”

An angry crowd in front of Amir Kabir university in the city appeared to chant “Commander-in-chief (Khamenei) resign, resign” in a video, according to Reuters. The news agency said it could not verify the authenticity of the video footage.

The Gateway Pundit has this…

Numerous videos of protests in Iran over the government shootdown of a passenger jet over Tehran that killed 176 people have been posted online Saturday. Translations posted with the video say the protesters are demanding the resignation of Supreme Leader Ayatollah Khamenei. The protesters were also heard to be chanting, “Our enemy is here, they tell us lie by saying it is America.” Sharif university is a well known university in the world, 14 top genius grad. students of this university were in Ukraine Airplabe. Ppl are gathered in front of sharif university and chanting “ our enemy is here, they( regime) telling us lie by saying it is America.” 1.11.2020 https://t.co/a1rdMvgmQE

They rallied in front of Sharif University and demanded Khamenei's resignation.#IranProtests https://t.co/2DFObrouGn

Protests are reported in Tehran's Sharif University as well. Students are chanting : "Khamenei have some shame! Get your hands off our country".

Iranians are furious with the regime after it shot down a civilian aircraft due to recklessness that claimed more than 176 lives pic.twitter.com/cIc9pX9Ntm

They rallied in front of Sharif University and demanded Khamenei's resignation.#IranProtests https://t.co/2DFObrouGn

Students at Tehran's Sharif University chant, "Mullahs MUST get lost"! This comes after the regime admitted to downing flight #PS752 that killed 176 people. A number of the victims were Sharif Uni. alumni. #IranProtests pic.twitter.com/TMweI34tlW

Read more at The Gateway Pundit…

It is important to take everything in perspective.

There are certainly those who will protest Donald Trump as well, but we don’t think of such things happening in Iran.

We expect Iranians to shout things like “Death to America” but we don’t often hear about the people turning on their own dictator.

I do wonder if the protesters in Iran carry the majority opinion, because in America they do not.

Most, so far, seem to be in support of Trump.

Protesters in America do not seem to grasp how much trouble Iran is to America.

They don’t remember what happened 40 years ago and they simply don’t pay attention to the constant threats and harassment.

A plane of innocent people going down is huge, but it will get much worse if Trump can not diffuse the situation.

I am praying and betting that he can.