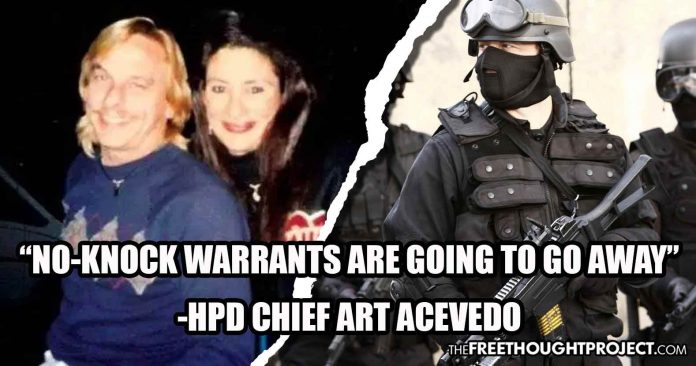 Houston, TX — It has been three weeks since the Houston police department fabricated information which led to a no-knock raid on an innocent couple’s home. The botched raid left and innocent husband, an innocent wife, and their dog—all murdered—as well as four cops shot. Now, in a move TFTP has never seen, the Houston police department is claiming they are taking steps to prevent future scenarios like this from happening—by ceasing the use of no-knock raids.

“The no-knock warrants are going to go away like leaded gasoline in this city,” Chief Art Acevedo said during a heated town hall meeting on Monday.

“I’m 99.9 percent sure we won’t be using them,” he continued. “If for some reason there would be a specific case, that would come from my office.”

As TFTP reported over the weekend, after controversy and rumors have swarmed the case, the Houston police department has admitted that the entire raid was based on the lies of one of their own.

“That’s totally unacceptable. I’ve told my police department that if you lie, you die,” Acevedo said Friday. “When you lie on an affidavit, that’s not sloppy police work, that’s a crime.”

When speaking of these crimes on Monday, Acevedo noted that the officer responsible for lying about this raid will likely be charged. As to what those charges are, however, we are still unclear.

“I’m very confident we’re going to have criminal charges on one or more of the officers,” he said—to which the crowd responded, “All of them!”

The idea of ceasing the use of no-knock raids is revolutionary when it comes to policing in the United States.

Across the country—largely due to the failed drug war—police conduct more than 20,000 no-knock raids a year.

A whopping 79 percent of these raids—like the one used to murder Dennis and Rhogena Tuttle—are for search warrants only, mostly for drugs. Just seven percent of no-knock raids are for crisis situations like hostages, barricaded suspects, or active shooters, according to an investigation by the ACLU.

What’s more, the study by the ACLU found that in 36 percent of SWAT deployments for drug searches, and possibly in as many as 65 percent of such deployments, no contraband of any sort was found.

Not only do these raids appear to be mostly unproductive, but they are often carried out on entirely innocent people based on lies, wrong information, or corruption, laying waste to the rights—and lives—of unsuspecting men, women, children, and pets.

For a department as large as Houston to be calling for an end to this practice is precedent setting. However, we will believe it when we see it. So far, it is just talk.

Moreover, Acevedo is refusing to allow the Texas Rangers to investigate the raid and is outspoken about keeping the investigation in house.

“I feel very strongly that a police department that is not capable of investigating itself and finding malfeasance and criminal misconduct,” he said, “we should just shut down — and that’s just not the case here.”

The idea that police officer Gerald Goines, who is accused of fabricating the evidence which led to the raid on the Tuttles, acted alone, seems sketchy at best. What motive would Goines have to make up evidence to justify a raid on an innocent family?

However, as we’ve seen in the case of Roderick Talley, drug task forces routinely conspire together to raid the homes of innocent people as a means of justifying themselves.

Cops have been routinely caught planting evidence, lying on warrants, and raiding wrong homes, and when we attempt to question this madness, we’re accused of hating cops.

“We are sick and tired of dirt bags trying to take our lives when all we’re trying to do is protect this community and our families,” Houston Police Officers’ Union President Joe Gamaldi said after the raid last month, just before threatening to “track” police accountability activists.

But the Tuttles were not dirt bags and the only ones who took lives that day were his police officers who kicked in the door to an innocent family’s home, murdered their dog and then murdered the family. All of it was based on lies from the very people Gamaldi incessantly praises and defends. So who are the real “dirt bags?”

When asked whether he would fire Gamaldi or others allegedly surveilling or harassing activists, Acevedo said he wouldn’t deal with speculation, according to the Chron.

Acevedo then asked for video so he could look into the claim, as if he didn’t turn on the television at all after the raid to see Gamaldi say, “If you’re the ones that are out there spreading the rhetoric that police officers are the enemy, just know we’ve all got your number now, we’re going to be keeping track of all of y’all, and we’re going to make sure that we hold you accountable every time you stir the pot on our police officers.”

Now the question remains of whether or not this lying cop and his alleged accomplices will be charged with the murder of these two innocent people who did nothing wrong but defend their home from armed invaders who kicked in their door and shot their dog. Will the other officers, who unquestioningly took the word of this criminal cop be held accountable for their role in this murder? Or, will this single cop be used as a scapegoat, be written off as a bad apple, and the taxpayers foot the bill?

If it’s up to Joe Gamaldi, it will likely be the latter. For now, however, we can maintain solace in the fact that we may be soon having a national debate about the use of these unproductive and deadly no-knock raids.