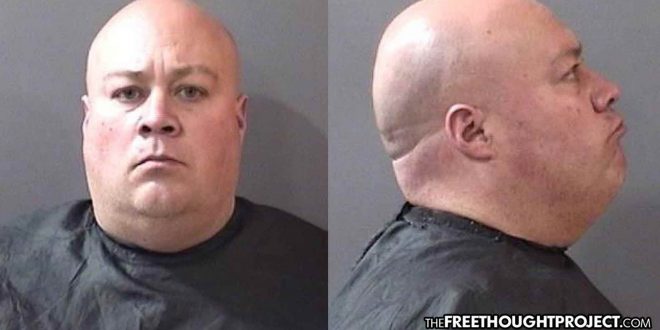 Indianapolis, IN — A 14-year veteran of the Indianapolis Metropolitan Police Department was arrested this week and accused of gruesome acts of violence against his wife. Adding to the horrifying nature of his alleged crimes is the fact that his wife had been reporting him to his department for months and no one took action.

This man allegedly beat his wife so viciously that her eyeball literally came out of her head and medical staff could put it back in. She was so traumatized by the incident that she has no recollection of how it exactly transpired.

After his arrest on Friday, Chief Randal Taylor suspended Norman and has recommended to the Citizens Police Merit Board that he be fired. Because his wife cannot recall the exact details of how she lost her eye, Norman was not charged in relation to that injury. Instead, that injury was unable to be ignored — like her previous complaints — and police launched a separate investigation leading to the current charges.

According to the Indy Star:

The investigation began on Feb. 25 when Norman called 911 from his home in Sheridan and reported his wife was badly injured in a fall from the tub.

The woman’s right eye was “coming out of its socket,” Norman told dispatchers, according to the probable cause affidavit filed in support of the criminal charges.

She underwent surgery at Ascension St. Vincent Hospital. In an interview with investigators a week later, police said she could not recall “salient details’ of what happened.

But she remembered other times that Norman abused her, according to the probable cause affidavit. She had endured two years of fear, pain and abuse, she told investigators..

In May or early June of 2019, she locked herself in a bathroom. She was on the floor, crying when Norman kicked in the door, according to court records. The door hit her in the face and broke her nose, she told investigators.

She “described having to reset her nose, or pop it back into place, after this injury,” Sgt. John Green of IMPD’s Special Investigation Unit wrote in the probable cause affidavit.

According to court records, the abuse happened for years and she’d reportedly tried to tell investigators and Norman’s supervisor, but her complaints fell on deaf ears. On June 29,2019 Norman’s wife told police that Norman was so irate that she tried to leave the house. However, before she could leave, he parked his patrol car perpendicular in the driveway, blocking her exit.

She took a picture of this and sent it to her cousin to have proof.

“(Norman’s wife) stated she didn’t attempt to leave the residence because she was fearful Jason David Norman would physically prevent her from doing so,” Green wrote.

In August, Norman “was getting worked up watching a political show with the volume loud” when he thought his wife said something, Green wrote.

He grabbed her leg and pulled her off the couch. She fell hard on her knee.

“(Norman’s wife) likened the way Jason David Norman pulled her off the couch to the way you start a pull-start lawnmower,” Green wrote.

At the time, she texted a photo of her injuries to Norman’s supervisor in the department. Nothing happened.

Apparently Norman even threatened his fellow officers if they would launch an investigation into him.

According to the probable cause affidavit, as RTV6 reports, Norman, in a text exchange with IMPD investigators, told police to “stay out of my way,” and threatened violence after a search warrant was issued for his house. Below one text message was a photograph appearing to depict a cowboy with a revolver on his right hip, and his right hand in a position suggesting he is about to remove the gun from his holster.

A simple Google search will illustrate how police officers are arrested for domestic violence on a near-weekly basis. It is also estimated that the incident rate for domestic violence is likely far higher than reported as many women stay silent out of fear of retaliation and the fact that their abuser’s brothers in blue will cover for them.

As this case illustrates, and as TFTP has previously noted, a report by a government-appointed watchdog group shows that most of the time, abusive officers who commit these crimes, do so with seeming impunity. The above case is a perfect example of why that is so.

A study conducted by the Domestic Violence Task Force called Domestic Violence in the Los Angeles Police Department: How Well Does the Los Angeles Police Department Police Its Own? revealed that performance evaluations of cops with a history of domestic violence are largely unaffected. The study of the LAPD examined 91 cases in which an allegation of domestic violence was sustained against an officer.

Sadly, it is estimated that many of the abused women never come forward as they know the likely result — which is getting shamed by the department for reporting it and potentially more abuse.