(Natural News) As the world watched in dismay, the fall of Kabul painted a vivid picture of the crumbling of the United States of America. The US military, hell bent on going “woke” with transgenderism and gays in the military, is utterly unable to protect its own personnel overseas, and has been impotent in protecting the US southern border from a relentless invasion of illegals that are pouring into the country.

The Biden administration is finished. Brain-dead Biden was never anything more than a bobblehead placeholder, and his time in the Oval Office is now coming to a rapid end.

As Biden’s rigged regime is ending, so is the United States of America as a “united” nation. With outrageous levels of fiat currency money printing, the collapse of the rule of law, blatantly rigged elections, government-enforced censorship of conservative views, media-fomented racial animosity, left-wing efforts to defund the police, racist CRT indoctrination in the schools and even a CDC director “doctor” who cannot admit that only women can get pregnant, the once great United States of America has fallen into a pathetic, laughable state of self-mockery and collapse. 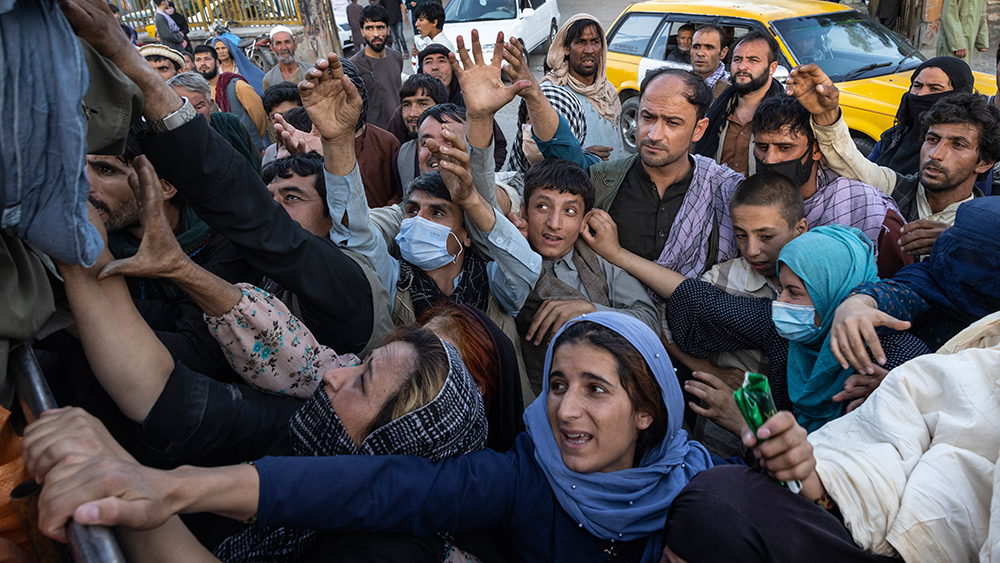 The military cannot defend the country, the “President” cannot run the country, the Treasury cannot fund the country and the “science” establishment can’t even bring itself to recommend vitamin D to save the country from a pandemic that was launched by the scientists themselves. The United States government now functions as a terrorist Taliban, waging war against its own people with forced vaccinated, engineered food shortages, massive government looting via money printing, and the designation of anti-lock protesters as terrorists.

There is now no federal government agency that serves any real interest of the public. ATF, DEA, FBI, FDA, CDC, IRS, HHS, DHS and more, they only now exist to enhance their own power by waging war against the very people they claim to represent. The FBI runs the terror plots… the CDC runs the biowarfare attacks… the FDA attacks supplements and CBD… the ATF tries to banish the Second Amendment… the DEA runs the drugs… and HHS, which is supposed to stand for Health and Human Services, has a decidedly anti-human agenda.

Above all, the federal government under imposter Biden now sees the American people as their enemy.

Beyond the incredible corruption that now characterizes the US federal government, the United States of America remains steeped in dark, demonic SIN stemming from mass abortions, infanticide, organ harvesting from babies, the transgender indoctrination and mutilation of children, the rejection of God and the embracing of Lucifer across pop culture, censorship attacks on Christians, rejection of the Church and the embracing of depopulation bioweapons on a national scale, disguised as a public health vaccine program.

When churches embrace transgenderism and push vaccines, those churches are serving Satan, not God, and this is the path that most of the mainstream “Christian” churches have chosen. (They will reap the effects of their own divine betrayal soon enough, it seems.)

God is watching. And while God is patient, his patience has clearly run out. His wrath is now being unleashed against this nation of sin, and even those who are not steeped in sin will be swept into the chaos and destruction that has already begun. This means that praying to God is not enough. You must also be prepared for the collapse of civilization as we know it.

Those who are spiritually prepared will be able to walk with God through the valley of the shadow of death (Psalm 23) and fear no evil, for they are prepared both spiritually and physically. Physical preparedness means having food, emergency supplies, self-defense supplies and readiness for the total collapse of food, electricity, telecommunications and the rule of law. Spiritual preparedness means embracing God and practicing faith in His plan for mass awakening, which requires the oblivious masses to witness the wrath of God before they will once again be humbled and then move to reject their sinful ways.

This cycle has been repeated over and over again through human history, and we are now living in the beginning of the “wrath” phase where God uses forces of nature to “reset” the world. If you thought Claus Schwab’s “great reset” was a big deal, just wait for God’s cosmic reset. Those steeped in sin, arrogance and denial of God’s existence will be cosmically destroyed. Those who took the spike protein injections — a physical manifestation of Lucifer at the nanoparticle level — will experience their own human cells being ripped apart from the inside as they are eaten alive by prion-like, Satan-inspired biological weapons.

As the bioweapons, droughts and natural disasters accelerate, society as we know it will crumble. The rule of law will fall, and the window of the sky will open up, raining down large masses that will only add to the volcanoes and earthquakes taking place on Earth, blotting out the sun and moon, leading to a global famine and food collapse. (See Isaiah 24 and 25, or Revelations, among other passages.) From Isaiah 24:

Behold, the Lord maketh the earth empty, and maketh it waste, and turneth it upside down, and scattereth abroad the inhabitants thereof.

The land shall be utterly emptied, and utterly spoiled: for the Lord hath spoken this word.

The earth also is defiled under the inhabitants thereof; because they have transgressed the laws, changed the ordinance, broken the everlasting covenant.

Therefore hath the curse devoured the earth, and they that dwell therein are desolate: therefore the inhabitants of the earth are burned, and few men left.

The spirit of America (and God) can be reborn, but only by those who humble themselves before the Creator

America has collapsed into a nation of sin, and that sin will be wiped from the Earth by great divine force. In its place, the survivors who humble themselves before God may rebuild the “new America” in the spirit of the original America, based on Christian principles, logic, reason, sanity and genuine equal rights under the law.

The liars, libtards, pedophiles, child traffickers, bioweapons developers, journo-terrorists, demon worshipers and similar kind will all be biologically destroyed, only to wake up and find their consciousness suffering in eternal Hell where they get to experience the hellish pain of their bodies being feasted upon by demonic creatures, over and over again, until the end of time. The Earth shall then be inherited by those survivors who refused the covid shots and refused to take part in the common sins of our time (abortion, pedophilia, transgenderism, etc.).

Importantly, even those of us who remain with God will bear witness to the “Hell on Earth” that has now begun. We will witness cities full of dead bodies and watch as the spike protein eats the brains of our own former friends and family members who insisted, “I believe in science!” We will have front row seats to the great suffering of our time; the starvation of the unprepared, the mayhem and violence unleashed in lawless blue cities, the generation of orphans whose parents died from the “clot shot,” the disease and death stemming from the collapse of basic human infrastructure.

Know that God needs humanity to witness the cost of turning away from God. When you turn away from the Creator, Mother Nature and the cosmic gifts of consciousness and life, you embrace the Cult of Death. And from that Cult of Death can only come suffering, destruction and self-inflicted demise. This lesson, long forgotten by modern, arrogant, oblivious human beings, is about to be learned yet again at an unimaginable cost. Sadly, modern humanity will never turn to God until they have first experienced the devastating cost of godlessness.

Never forget that the Democrat party is a death cult, and all who follow it are ultimately followers of Satan. Most of them have chosen to poison their own God-given bodies by injecting themselves with a biological weapon. This is an egregious sin of self-destruction and the strongest possible rejection of God, from which there is likely no salvation.

Listen to today’s powerful, divinely-inspired podcast for the rest of this important lesson. Also read Prophecy.news for more articles.

Discover a new podcast (and some hard-hitting interviews) each day at: