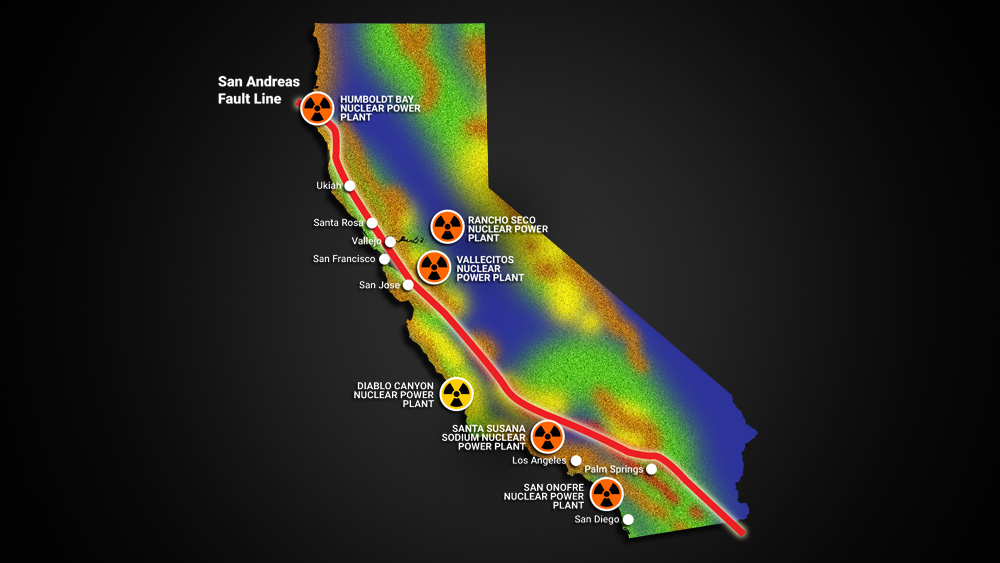 (Natural News) A Natural News investigation into the geolocation of nuclear power facilities in California reveals that five nuclear facilities were built in close proximity to the San Andreas fault line, with some constructed right in the middle of earthquake zones that have up to a 50% chance of a severe earthquake every 30 years.

One nuclear power plant – the Diablo Canyon Nuclear Power Plant which produces 2,160 megawatts — was constructed on the coast, making it extremely vulnerable to the very same kind of ocean water surge that destroyed the Fukushima-Daiichi facility which suffered a 2011 meltdown in Japan. That nuclear catastrophe — which was dutifully covered up by the entire western media for months — was caused by an underwater earthquake that produced a tsunami wave which engulfed the facility. California’s Diablo Canyon Nuclear Power Plant is positioned on the coastline in the exact same way, making it highly vulnerable to underwater earthquakes or other events such as underwater caldera explosions that can produce massive tsunami waves.

There are five additional nuclear power facilities in California which are in various stages of being decommissioned, and many of them continues to store nuclear fuel on sight. Four of the five were constructed in close proximity to the San Andreas fault, with only one — the Rancho Seco Nuclear Power Plant — located in an area with a near-zero chance of an earthquake. The Humboldt Bay Nuclear Power Plant, located north of San Francisco, was constructed almost exactly on the San Andreas fault. 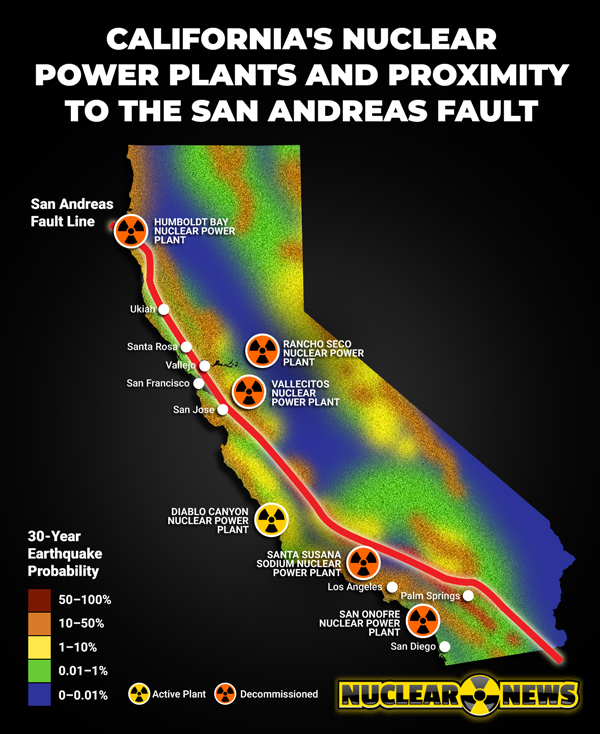 Critically, SAFSTOR operations are incredibly expensive, and in 2013, PG&E requested nearly one billion dollars in additional revenue from California energy customers just to fund the SAFSTOR decommissioning of the Humbold Bay Power Plant Unit 3. From this public advocates page of the California government:

Crucially, PG&E filed for Chapter 11 bankruptcy in January of this year (2019), after dealing with costs from the devastating wildfires that burned up huge regions of California, which were blamed on PG&E. Thus, it’s not clear whether PG&E has any money to continue funding the nuclear fuel SAFSTOR / decommissioning procedures across multiple nuclear power plants.

With California now offering free health care to illegal aliens, the bankruptcy of the state seems inevitable. Who will fund the continued decommissioning of the nuclear fuel in California once public money runs out and the big infrastructure corporations are all bankrupt? The Diablo Canyon Nuclear Power Plant has been scheduled for decommissioning beginning in 2025, but will PG&E have any money left by then?

As the Fukushima-Daiichi nuclear power facility was being constructed, the people of Japan were assured the power plant was safe and could never suffer a nuclear meltdown. Once the tsunami took out the plant’s batteries and backup generators, however, the meltdown was only a matter of physics and time.

As the meltdown accelerated, Japan’s TEPCO power company turned off the dosimeters to avoid having to report extremely high radiation levels, just as the former Soviet Union did with the Chernobyl accident in 1986.

The same professional liars and nuclear “experts” also assured the California public that California’s nuclear power facilities would be “earthquake proof.” They are constructed with reinforced concrete, after all. What could possibly go wrong?

The answer is simple: A 9.0 magnitude earthquake could go wrong. There is no nuclear facility in the state of California that was designed to withstand a 9.0 earthquake, which releases 100 times more energy than a 7.0 earthquake.

A collapse of an active nuclear power plant could result in runaway fission (Diablo Canyon), resulting in a meltdown event that would likely burn through the foundation of the power facility and poison both groundwater and ocean water, turning California into another haunting echo of Fukushima.

Cesium-137, one of the radioisotopes released in this type of accident, has a roughly 30-year half-life, meaning much of Southern California would be uninhabitable for 300 years (it requires ten half-lives to be considered gone). Imagine the logistics of attempting to evacuate Los Angeles, San Diego and San Francisco.

Even in nuclear facilities that are not currently active, the crumbling of storage pools and power plant walls could place nuclear fuel rods in fissionable proximity, resulting in a runaway fission event that leads to a meltdown. This might be even more difficult to control, given that these non-active nuclear power facilities don’t have full-time staff or, in some cases, even the equipment necessary to deal with a full-blown nuclear emergency.

In other words, even nuclear fuel rods currently kept in cold storage are not entirely safe from a powerful earthquake. It simply isn’t safe to store nuclear fuel anywhere near the San Andreas fault line… not under any conditions.

The easiest way to understand the geological phenomenon of the San Andreas fault is to realize that the entire land mass located west of the line is slowly moving to the northwest. But everything east of the line isn’t moving at all. (Technically, it’s still moving but at a much slower rate and in a different direction.) This steady movement of the tectonic plate on which the entirely of the West Coast of California rests means that massive, high-energy earthquakes will be unleashed every few decades, seemingly at random. But it isn’t random. The large earthquakes actually follow periods of low earthquake activity, since “low earthquake activity” indicates rising geological tension that has yet to be released.

Notably, California has experienced decades of low earthquake activity, meaning “the big one” is being wound up, ready to be released at a future time and day that will be impossible to accurately predict.

The longer the period of calm, the bigger the earthquake that ultimately gets unleashed. We’re talking about trillions of tons of Earth “slipping” in spontaneous shifts of deep tectonic plates that slowly migrate across Earth’s surface.

The very idea of building nuclear power facilities on or near this San Andreas fault line highlights the sheer stupidity and suicidal nature of humankind. Clearly, somebody got paid off, the corporation hired a P.R. firm to lie to the public, the hands of regulators were greased and California ended up with a whole series of nuclear power facilities that are just begging to be destroyed by a massive earthquake (that’s sure to come, sooner or later).

It’s almost as if California raised its hand and begged to win the Darwin Award for fatalistic human stupidity. No person in their right mind would build nuclear power facilities on or near one of the most dangerous fault lines on the planet, yet that’s exactly what California officials did. All in the name of “clean energy,” of course.

The smart people are leaving California now, ahead of the financial collapse of the state and the impending nuclear catastrophe that seems inevitable. Those left behind may one day pay the ultimate price for the stupidity of California bureaucrats, which cannot be overstated.

Los Angeles, it seems likely, will one day be uninhabitable by humans. Some would argue the collapsing liberal-run cities like L.A. and San Francisco are barely habitable right now. But we’re talking about radioactive fallout, not just widespread homelessness, addiction and poverty caused by liberal policies that destroy everything they touch.

If you are currently living on or near the San Andreas fault line, you are not just playing Russian roulette with your own property and home; you’re living right in the middle of a future radiation fallout zone that will never be solved by left-wing bureaucrats for the simple reason that they are incredibly stupid, shortsighted and entirely focused on their own greed and power, regardless of the real cost to humanity.

Stay informed on issues of nuclear power by reading Nuclear.news or Radiation.news. And if you don’t yet own an emergency supply of Iodine, you’re not living in the real world.

And ask yourself why the entire “scientific establishment” worked so desperately to destroy cold fusion, which could have replaced nuclear power plants that now threaten humankind.