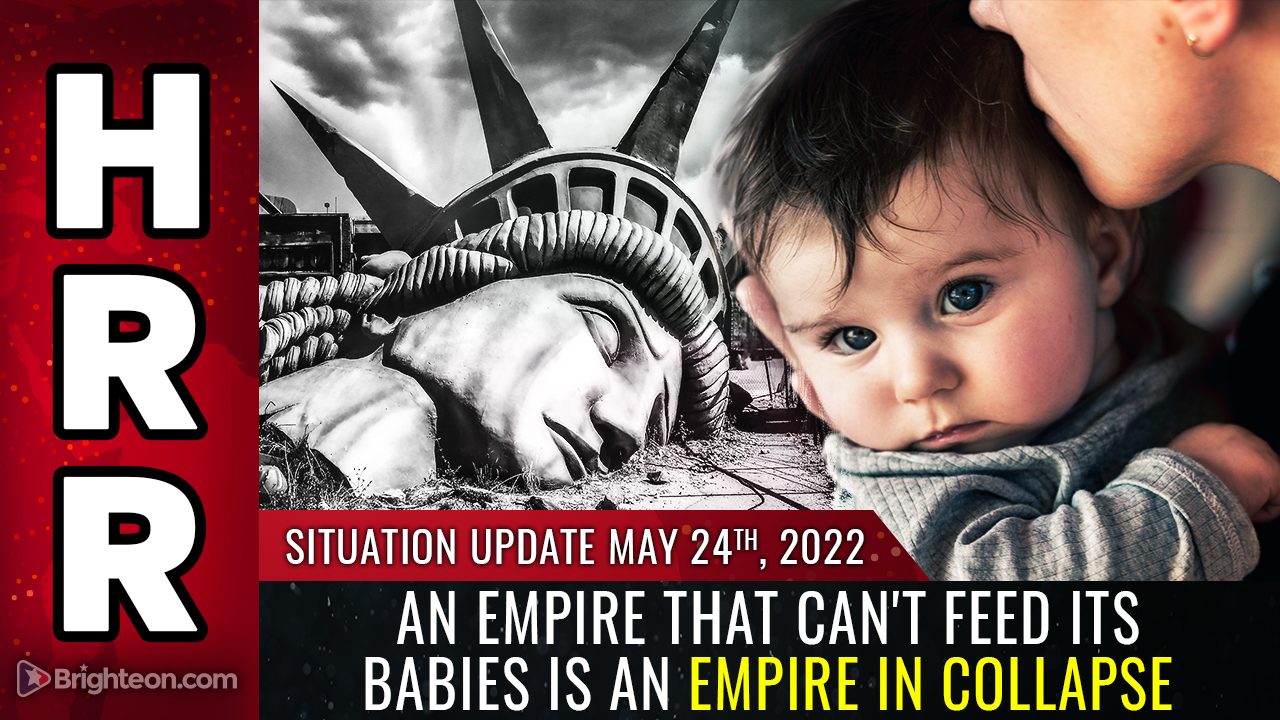 (Natural News) The American empire is in a state of accelerating collapse, and there’s no turning it around. This once-great empire now cannot achieve the most basic of tasks that even isolated jungle tribes can still manage to do: feed their own babies.

Somehow, with all the high-tech dazzle, iPhones, high-frequency Wall Street trading, electric vehicles, space rockets and all the rest, America still can’t figure out how to feed babies … something that ancient homo sapiens have been doing for hundreds of thousands of years.

Even before the invention of the wheel, humanity’s ancestors knew how to feed their babies.

They also survived without vaccines. How? The immune system, of course.

Of course, even though America can no longer feed its babies, the American empire is fully able to deliver deadly “vaccine” injections that cause infertility and death. There never seems to be a shortage of anything that might kill you. But when it comes to feeding babies, the USA falls flat.

I sent this message yesterday on Telegram:

While US bureaucrats claim to want to help the world experience less WAR and more FOOD security, they pass $40 billion to buy weapons of WAR while blocking Russia from selling wheat for FOOD. So wait… if you want less war and more food, why are you spending money on war and blocking the trade of food?

And I followed it up with this:

Isn’t it amazing how now, suddenly, ALL #food scarcity in the world is attributed to Russia blocking a single port (Odessa) in southern Ukraine?

It’s as if we are now supposed to believe that literally ALL FOOD ON THE PLANET had, until recently, been shipped through one single port in #Ukraine, then distributed globally. That’s a port that virtually no one in the USA had heard of until last month.

The absurdity of the food scarcity blame game against #Russia is beyond insane.

Remember, too, that Putin is a TIME TRAVELER because he traveled back to late 2021 and caused food inflation even BEFORE his invasion of Ukraine. That’s amazing!

Under Biden, America’s twisted priorities focus on war and death, while ignoring babies and LIFE

So under the illegitimate Biden regime, we end up with a nation that focuses on death, war, the weapons industry, stock market inflation, money printing, media propaganda, vaccine coercion and more, while ignoring anything that might protect babies or even provide them food. Under the control of heartless Democrats, we now have a corrupt government wholly committed to abortion, bombs and even carrying out acts of domestic terrorism (false flags), but there’s zero willingness to protect the border, protect the dollar, protect children or protect individual liberty.

While America is sending $40 billion to Ukraine — mostly to purchase weapons and fund propaganda campaigns for brainwashing the public — there’s no embracing of free market dynamics in the USA which would provide an abundance of baby food options without involving government resources in the least.

The free market can solve this problem. But the free market isn’t allowed to operate. Instead, we get FDA-protected infant formula corporate cartels and market monopolies that are highly vulnerable to failure. This is a microcosm of what we’re about to see across the economy on a much larger scale as western civilization rapidly unravels.

It seems to be no coincidence that Biden and the Democrats are also celebrating the mass murder of babies under the label of “abortion.” These Satan-worshiping creatures have no compassion for human life, and they despise babies being born alive and demanding resources such as food.

When Biden and the Dems claim to want to provide food for babies, they’re merely pretending to have human compassion. They would actually rather these babies never be born. The Great Replacement strategy is, after all, quite real. Americans are supposed to die (or never be born) and then get replaced with migrants across the wide open border. And for those babies who actually survive birth, they face starvation or having their genitals cut off under the fraud of transgenderism that’s also pushed by the child groomers and abusers of the progressive Left.

They are demons who hate children. They rigged the election and they’re using their malicious intent to try to destroy the nation just as they destroy the lives of innocent children.

Do not let them succeed.