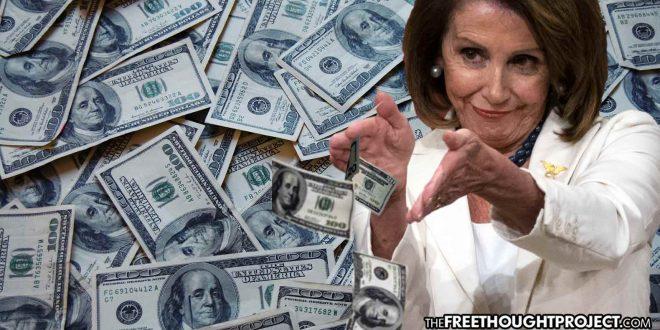 Oh, but they claim they are for the little guy, right? Look, both parties are being used against the people, and this is just another example of the corruption in DC. The HEROES Act is nothing more than the former COVID stimulus bill: unconstitutional wealth redistribution.

The Foundation for Economic Education reports:

At some point, when the election chaos is finally settled, Congress will likely turn to passing another COVID-19 stimulus/relief bill. (Despite the last one being plagued by rampant fraud and dysfunction). One starting point for negotiations will be the “HEROES Act,” a $2.2 trillion bill the House passed in October on a party-line vote by Speaker of the House Nancy Pelosi and her fellow Democrats.

One of the most significant aspects of the HEROES Act is that it allocates nearly $700 billion in federal money for state, local, and tribal governments.

Proponents say this gives localities the funds they need to pay emergency responders and fund programs necessary to protect their communities. Critics point out that much of this money is used to “bail out” blue states that were already mismanaging their budgets and running up large unfunded pension programs before the pandemic.

Indeed, the left-leaning Brookings Institution has projected that “state and local government revenues will decline $155 billion in 2020, $167 billion in 2021, and $145 billion in 2022.” Simple math shows us that the CARES Act gives states and localities hundreds of billions more in federal money than they are actually projected to lose due to pandemic-related decreases in revenue.

This alone should be a red flag. Yet a new analysis also reveals that Pelosi and her fellow “progressives” snuck millions of dollars in cash for some of the nation’s wealthiest zip codes into their emergency COVID-19 package.

Should the American taxpayers from lower-income areas be subsidizing the lifestyles of the rich and famous? https://t.co/0vL5v56zMw

Watchdogs from OpenTheBooks.com inspected the fine print of the HEROES Act and found that it allocates $350 million to the 50 richest communities in America. The average annual income in these areas ranged from $262,988 to $525,324.

“It’s unclear why such wealthy neighborhoods need so much money to weather the storm,” Adam Andrzejewski of OpenTheBooks.com wrote. “Should American taxpayers from lower-income areas be subsidizing the lifestyles of the rich and famous?

Some might reasonably look at a figure like $350 million and conclude that, in the context of a $2.2 trillion bill, it is a relatively small amount of money. But we mustn’t forget that this figure is only looking at a tiny sample size. It is not all the money this bill allocates to wealthy zip codes, just a snapshot.

We can extrapolate from this figure that the HEROES Act would dole out many hundreds of millions if not billions more to other wealthy towns and cities.

It’s not even the only provision of the bill that can be fairly characterized as a handout for the rich. The package also includes items such as student debt relief, which further burdens cash-strapped taxpayers yet only helps a relatively well-educated and well-off subset of society.

But wait: Aren’t Democrats supposed to be the progressive party fighting for the working class? That’s certainly what their rhetoric would suggest. Yet the Democrats included cash handouts for wealthy constituents in predominantly liberal areas such as Wellesley, Mass., Malibu, California, and Old Greenwich, Conn. in their emergency response package nonetheless.

Humans are fallible beings—and power corrupts. This is why, from tax loopholes to crony regulations to spending bills, sweeping government interventions will always end up skewing in favor of powerful constituencies. However, when power is left to the individual level rather than government, that decentralization helps limit abuses.

The only way to really prevent the abuse of government power and expenditure of taxpayer resources in favor of the well-off and well-connected is to limit the scope of the government itself.

Tim Brown is an author and Editor at FreedomOutpost.com, SonsOfLibertyMedia.com, GunsInTheNews.com and TheWashingtonStandard.com. He is husband to his “more precious than rubies” wife, father of 10 “mighty arrows”, jack of all trades, Christian and lover of liberty. He resides in the U.S. occupied Great State of South Carolina. . Follow Tim on Twitter. Also check him out on Gab, Minds, MeWe, Spreely, Mumbl It and Steemit
(Visited 13 times, 1 visits today)
Share
Tweet
Share
Pin