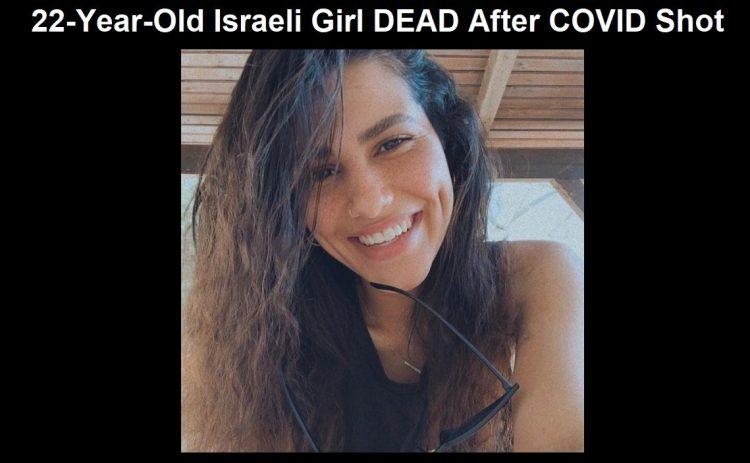 What is it going to take for the people to rise up and push back against these fascists pimping their poisons on the people of the world? In another notch in Pfizer and the depopulation globalists, a 22-year-old Israeli girl has died following her experimental Pfizer COVID injection.

The Times of Israel reports not only on the woman’s death, but also that there are numerous reports of others in Israel having myocrditis, the same problem this young woman had following her injection that led to her death.

The family of a young Israeli woman who died of heart inflammation after being vaccinated against COVID-19 has blamed the hospital where she was treated for her death.

ver, Hilel’s condition worsened and she began to have difficulty breathing and pains in her chest and was taken to Safed’s Zi

At the hospital, Hilel was diagnosed with myocarditis, inflammation of the heart muscle, which boyfriend Eyal said the doctor compared to a swollen shoulder.

“I said okay, three, four days or a week. I’ll be with her as much as needed,” he said.

According to the network, there have been other cases of myocarditis among Israelis who received both vaccine shots, but all had been successfully treated, including patients in more serious condition than Hilel.

Hilel was eventually taken to the cardiac care unit, where her family asserted she was not sufficiently watched over by hospital staff.

“I looked at the monitor, I saw the breaths. The monitor was beeping and no one approached,” Nofar Hilel said.

“I got ready so quickly and said, ‘I’ll go up [to the hospital] to see what we can save.’ Five minutes later they called to say she died,” Nofar said.

She added: “She just deteriorated before their eyes and no one, just no one even lifted a hand and said, she isn’t receiving care.”

A lawyer for the family said Hilel’s relatives intend to take legal action against the hospital.

Below is an interview conducted by Israeli news with Hilel’s sister, Nofer, and her boyfriend, Eyal. The interview is in Hebrew.

Israel has been at the forefront of tyranny when it comes to their people and others around them. Prime Minister Benjamin Netanyahu is the puppet now being used to push the injections upon his people, which is nothing more than a genocide. As we previously reported, a young woman in Israel was warning the world that they were not being allowed to buy and sell, go places and engage in other activities unless they took the experimental injection, all of which, ironically, is against the Nuremberg Code.

Israeli Woman Warns: Most “Vaccinated” Are Forced, Human Rights Violated – We Are Captives – Today Israel, Tomorrow It Will Be Your Country (Video)