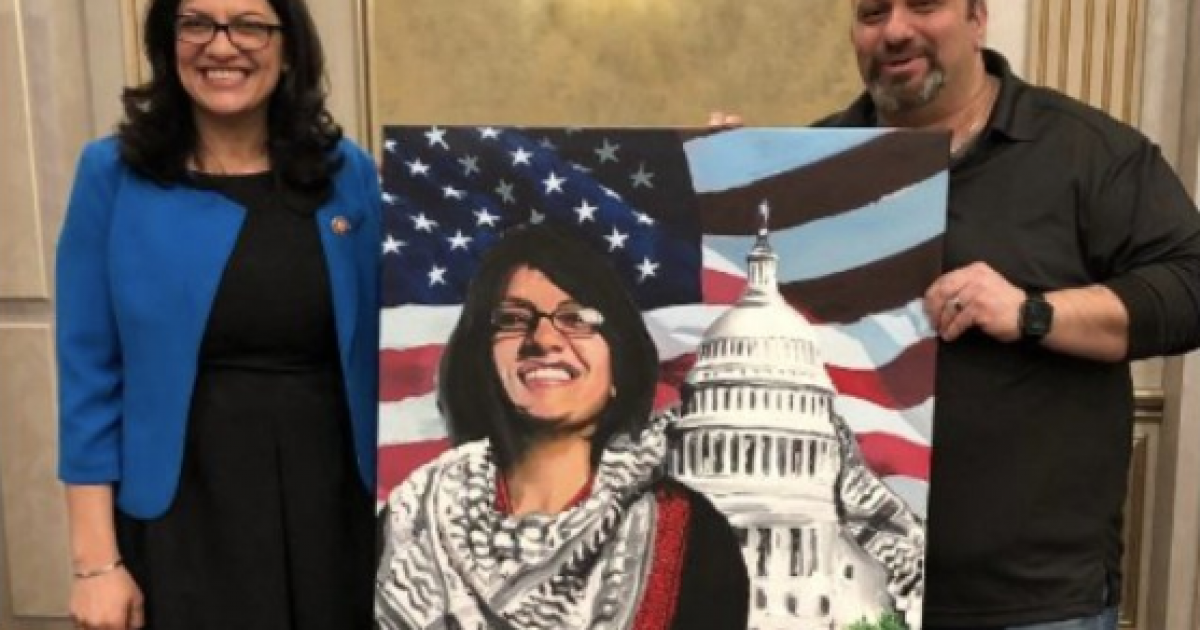 Rep. Rashida Tlaib (D-MI) has come under attack during her campaign and in the past week. She was sworn in on a Quran and also called President Donald Trump a “motherf**ker,” pledging to impeach him, but I don’t think she knows what for just yet. Now, it’s being revealed that she posed with pictures of a pro-Hezbollah activist named Abbas Hamideh during her swearing-in ceremony.

Al-Awda co-founder Abbas Hamideh, who is a pro-Hezbollah, pro-Palestinian activist posted pictures of himself alongside Tlaib on Monday.

“I was honored to be at Congresswoman @RashidaTlaib swearing in ceremony in #Detroit and private dinner afterward with the entire family, friends and activists across the country,” he tweeted with a picture.

I was honored to be at Congresswoman @RashidaTlaib swearing in ceremony in #Detroit and private dinner afterward with the entire family, friends and activists across the country. #Palestine #TweetYourThobe #RashidaTlaib pic.twitter.com/caJPN12ODX

However, he received a thorough backlash over his history of supporting Islamic terrorists.

Critics were quick to point out that Mr. Hamideh, a co-founder of the pro-Palestinian group Al-Awda, which means “right of return,” has a history of praising Hezbollah leaders such as Sayyed Hassan Nasrallah and declaring that Israel has no right to exist.

In December 2015, Mr. Hamideh called convicted terrorist Samir Kuntar a “legendary Hezbollah martyr,” days after he was killed in an explosion in Damascus. Kuntar was convicted of murder and terrorism for his role in a 1979 attempted kidnapping that resulted in the deaths of four Israelis but was released in a 2008 Israeli-Hezbollah prisoner exchange.

Max Samarov, executive director for research and campus strategy of the pro-Israel group Stand With Us, said that Mr. Hamideh has a “long record” of incendiary rhetoric.

“Just one example: He called Hezbollah leader Hassan Nasrallah ‘the most honorable man on earth,’” Mr. Samarov said, referring to a February 2016 social media post. “Hassan Nasrallah has made genocidal threats against Jews, he has actively aided the dictator Bashar al-Assad in the mass murder of the Syrian people.”

Mr. Samarov said he was unaware of any other member of Congress meeting with Mr. Hamideh. Ms. Tlaib’s office did not return immediately Monday a request for comment.

“So there’s a litany of disturbing comments along these lines,” Mr. Samarov said. “No member of Congress, Republican or Democrat, should be associating with people who are racist or who support violence against innocent people.”

He said Al-Awda has “expressed a lot of really extremist views. I see them as a hate group.”

Hamideh took the time to rip into the Zionist Organization of America after they called out Tlaib for posing with him.

The Zionist Organization of America condemns @RashidaTlaib for taking a picture with me? Really? Of all organizations the Criminal ZOA 😂

Another took the time to blast Hamideh over his support of Islamic jihadis.

And here is @RashidaTlaib's friend Abbas Hamideh mourning the death of Hezbollah terrorist Samir Kuntar who murdered a 6 year old child by bashing her head in with the butt of a rifle, among other barbaric acts of terrorism. pic.twitter.com/vsGIIs4rP3

And here is @RashidaTlaib's friend Abbas Hamideh calling the murder a baby in the womb, and the shooting of a pregnant woman at a bus stop, a "resistance operation."

Yet Rep. Tlaib believes Hamideh is worthy of special invitation her Congressional swearing in ceremony. pic.twitter.com/hypupVKOVt

I suppose we shouldn’t be surprised that a woman who supports the PLO and its desire to wipe Israel off the map to align herself with pro-terrorists like Hamideh.

Tlaib already has tens of thousands of people calling for her impeachment after threatening to impeach the “motherf**cker” Trump.

As Jesse Lee Peterson has pointed out, Rashida Tlaib is a national security threat, and the fact that she posed with a picture with this man rather than calling him out, is evidence of that statement.