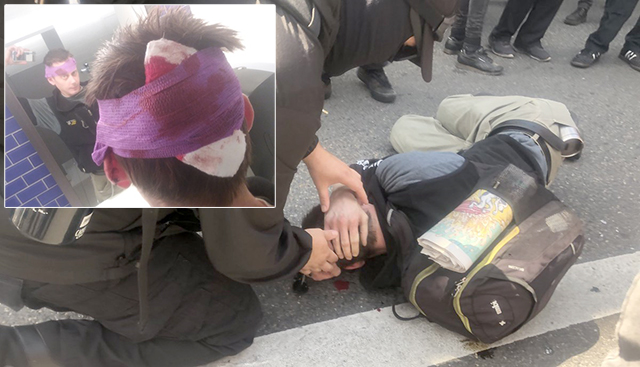 It turns out the man filmed at the Patriot Prayer march in Portland on August 4th having an American flag ripped out of his hands by Antifa before being smashed on the head with a pipe was a Bernie Sanders-supporting leftist.

Antifa attacked him because they said the American flag he was carrying was a “fascist symbol.”

From Oregon Live, “He brought an American flag to protest fascism in Portland. Then antifa attacked him”:

Paul Welch came to the downtown protest Aug. 4 to let his political leanings be known.

With pride he clutched his U.S. flag as he moved among the crowd of like-thinking demonstrators.

Soon a group of black-clad anti-fascist protesters, also known as antifa, demanded he lose the flag, calling it a fascist symbol. Welch refused, and a tug-of-war ensued.

It ended with Welch taking a club to the back of the head, lying on the ground in a pool of his own blood.

Only Welch was not a Proud Boy, a Patriot Prayer supporter or among the other conservative activists who descended into the area that day, many from out of town.

He was one of hundreds of progressive Portlanders who had turned out to oppose the right-wing rally held at the Tom McCall Waterfront Park.

[…]”I had felt like showing that a liberal, free Portland — or any major city, really — is much more American and much more numerous and strong than any of these interloping groups,” he said.

A “slightly progressive leftist” by his telling, Welch is a registered Democrat in Oregon, voting records show. He cast his ballot for Bernie Sanders in the 2016 presidential primary and Hillary Clinton in the general election, he said.

Welch suffered from a concussion after being hit by a masked antifa goon with what he says was a “metal object.”

“I remember thinking there was a very good chance that I could be beaten to death,” Welch said.

As blood began to pool around Welch’s head, a group of volunteer street medics rushed to his aid, he said. Another medic eventually got Welch into a car and drove to an urgent care clinic on North Interstate Avenue.

It took four staples to close the 3-inch gash in the back of his head, Welch said. He spent the next two days recovering from a concussion, though he was able to return to work.

It’s important to remember, as Mitt Romney reiterated in an attack on President Trump two weeks ago, these violent antifa lunatics are the good guys because they’re fighting “hate!”