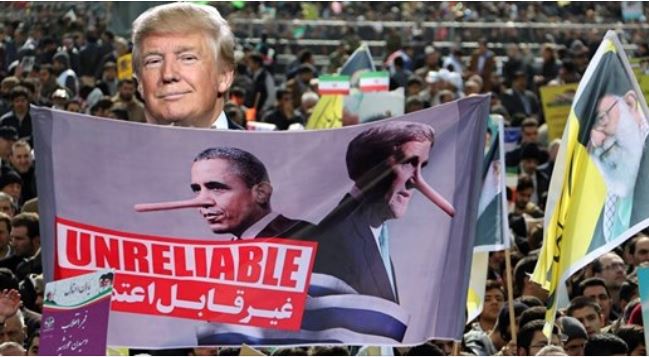 Opinion| Mark Sidney| Just when you think the left could not display their distain, not for our leadership (President Trump), but our nation, more fragrantly, they do just that.

If you were to take a glance at Twitter this morning you would see Tweets from people like ‘Rose McGowan’ (apparently she is, or was, ‘somebody’) that looks like this:

Dear #Iran, The USA has disrespected your country, your flag, your people. 52% of us humbly apologize. We want peace with your nation. We are being held hostage by a terrorist regime. We do not know how to escape. Please do not kill us. #Soleimani pic.twitter.com/YE54CqGCdr

Thanks a lot, dickhead @realDonaldTrump

Hello fellow Americans. Do you know this man? Did you know he was your enemy? What? Never heard of him? By the end of today you will be trained to hate him. You will be glad Trump had him assassinated. You will do as you are told. Get ready to send your sons &daughters off 2 war pic.twitter.com/8CprNDMgTf

A little background on Soleimani via Business Insider: ‘Soleimani was designated by the US as a terrorist for his ties to Iran’s Revolutionary Guard Corps. The elite Quds Force, a branch of the Revolutionary Guard, provided lethal aid to the Taliban and other extremist groups.’

Ok, look, I have to admit, I do not want another war. Not in Persia, not in Russian, not in China (tho that one is inevitable, IMHO). I also agree that we should not be in Iraq, we never should have been in Iraq and our foreign policy, pre-Trump, has been one that Trotsky himself would envy.

That being said, there is a HUGE difference between being critical of our policy abroad and working to elect leaders who share your world view, and kissing the ass of a terrorist state run by insane radicals who slaughter their own people and force them to live under Sharia Law.

The fact that this is even a conversation we are having tells you just how absurd the left has gotten. They think they hate Trump, and apparently American soldiers, so much, that they seek to aid and comfort Islamic radical states who export terrorism in their region via the infamous terror group, Hezbollah.

While the left in America vows to defend Iran and begs for help from the radical Islamic Republic, maybe we should take a look at what the people who are forced to live under this brutal Iranian regime have to say about the killing of Soleimani. Let’s check out what Iranians and Iraqis are saying on Twitter:

There are thousands of these, but here are just a few more:

This is the reason I’m saying #TnxPOTUS4Soleimani @khamenei_ir and his terrorists killed more than 1500 just in 2 days during #IraqProtests in November.
Maybe now they feel what mothers of these angels feel. pic.twitter.com/hyt1L5RzDb

Here is a video of people in the Middle East (exact location unknown) reportedly, celebrating after hearing the news that Soleimani was killed by US forces:

I want to add a disclaimer to these videos: We know that old footage has been used by propagandists, usually on the left, but I would guess by those on the right as well, and represented to be new, in order to support their causes. As I was not there I can not tell you where or when these events happen. I believe them to be genuine, but you can make up your own mind.

While the left seems to love Sharia Law more than America, and definitely more than Trump, as Paul Joseph Watson often points out, ‘the left can’t meme.’ Tellingly, the people of Iran can:

I still can’t believe this mother fuckers are gone, but thanks anyway uncle trump#TnxPOTUS4Soleimani pic.twitter.com/XITWL29FVg

Now, this is just a sampling of a few tweets, there are thousands more. There are also thousands more condemning the US for the attack, which killed a man who many Iranians say was responsible for killing proponents of Democracy and protestors of the totalitarian Iranian regime.

Again, no one wants to see our troops deployed to distant lands, fighting other people’s battles. America is not, nor do I believe should be, the policemen of the world.

However, Iran has made is clear that they want a fight with us. Iran has attacked us for years, via proxy, in the region. Their people have tried to revolt in the past, and Obama did nothing to support them.

Ideally we can find a way to provide the military support for a populist Iranian uprising, without having to deploy US troops. While I am not a proponent of regime change (unless we find out that the attack on our embassy was staged) if we assume it is true that Iran was behind the assault on our embassy, and the people want this tyranical regime overthrown, perhaps we should provide the Iranian people the support they need in order to throw off their Sharia Law imposing regime and implement a government of THEIR choosing.

I do not pretend to have all the answers, what do you think the answer is, what should Trump do next?