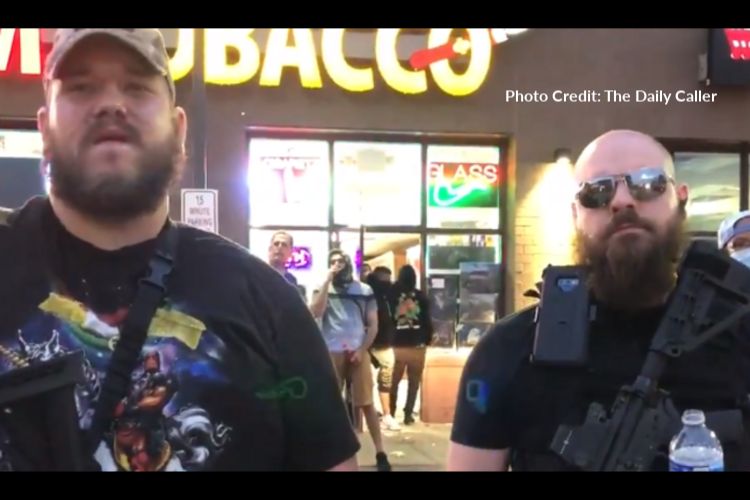 The only thing between several businesses and a bunch of people rioting is a couple of unnamed armed citizens.

As all hell breaks loose in Minneapolis over the lack of action taken against a police officer who killed a citizen on video, some self-titled “free Americans” helped store owners protect their property. They heard that the store owners had boarded up windows and were standing guard with machetes, and they went to help.

But if you think the men were there because they disagreed with the protests, you’d be incorrect. In a statement to Max Nesterak, a reporter for the Minnesota Reformer, the men said:

“Basically you see the records that cops keep,” one man told Nesterak in a now-viral video posted to Twitter. “And cops are a lot less likely to try and tread on people’s rights when there’s other armed Americans with them. So I figured it’s about damn time that some heavily armed rednecks stood with fellow citizens.”

“It turns out these guys are out here with machetes and shattered windows trying to keep looters out of the businesses ’cause cops can’t get in here,” one man said. “So I figured before there were cops, there were just Americans, so here we are.”

“Bottom line, justice for Floyd and I hope they stop looting at some point. If there were more of us we could go stop them from looting, but it’s just us four,” said the man on the right.

These two men say they support the protests but not the riots and are helping protect a tobacco store owner from looting
pic.twitter.com/PDn2Jd8iEB

As of today, the good Samaritans are still unidentified.

This isn’t the first time armed citizens protected businesses during times of unrest.

This is not the first time that armed citizens have protected property during riots.

During the Ferguson riots in 2015, St. Louis Ink Tattoo Studio and County Guns remained unscathed as businesses around them burned or were looted, due to the protection of armed citizens.

After hearing of the roving bands of looters, Mike Gutierrez knew he had to protect his tattoo shop. He brought a posse with him, including Adam Weinstein, owner of County Guns, who was acutely worried about criminals getting their hands on his merchandise.

“We didn’t want them coming in here and then running around with a bunch of free guns,” Weinstein told Daily RFT when we arrive at the store around 12:30 a.m. this morning. Weinstein was outfitted with an assault rifle, pistol and tactical vest. Gutierrez cradled his own rifle in his hands. (source)

And who can forget the videos of Korean-American store owners in Los Angeles protecting their businesses with a variety of firearms as angry mobs besieged the area during the LA Riots of 1992?

This should serve as a reminder of why citizens need guns

After the on-camera death of George Floyd, it was a given that unrest would ensue, particularly when the police officer who killed him and the three who stood by and prevented citizens from coming to Floyd’s aid were merely fired and not arrested.

If you’re faced with an angry mob, you’re going to want as much force equalization as possible. In all the cases above, no armed citizens shot anyone. Their presence and willingness to defend their property served as a sufficient deterrent, as is often the case. In nearly every situation, people rioting are going to choose targets that aren’t likely to kill them. And this doesn’t just hold true for civil unrest – a gun in the hands of a determined person has deterred countless crimes – and I speak from experience.

You can’t count on the police to save you during times like this – they’re busy and likely couldn’t get through the crowds anyway. You’re completely on your own. And at some point during prolonged turmoil, the police and military will finally throw their hands up in the air, give up, and go home to protect their own families,

The only person you can rely on to protect your family is yourself.

The only person you can truly rely on during scenarios like this is yourself.

While I’m always going to recommend first to not be there during times of unrest, if you are there and you missed the window to leave during a riot, you’re the only game in town when it comes to the safety of your home, your livelihood, and your loved ones.

Take a long hard look at the threats you face during civil unrest. Wherever you live, whatever your situation, you need to plan as though 911 does not exist. Whether riots are occurring in the streets or not, in the seconds during which the lives of your family hang in the balance, you are completely on your own.

Sometimes the mob just wants to set your home or business on fire. But In other situations, it won’t stop with the destruction of your property. You may have to defend your home. And for this, you must be armed. No amount of hand-to-hand self-defense training will deter an angry mob but staring down the barrel of your firearm just might. Here’s more information about being prepared to survive civil unrest.

Being willing to protect your family is not an endorsement of police brutality. I know that I am personally disgusted by the action that set off this entire chain of events. However, when the angry crowds are on your street, it’s no longer about the initial incident. People aren’t thinking rationally when it has escalated this far.

Being armed is a matter of survival in situations where the normal rules of society have completely broken down.

I’m sure I’ll receive another barrage of email wishing me and my children dead by our own guns. Blah, blah, blah. It always amazes me how people who swear vehemently that they’re against violence can send me those letters that fervently and creatively hope for our gruesome murders.

Watching the effectiveness of firearms in the hands of people like the ones mentioned in this article to deter violence – not commit more of it – makes me even more determined to remain prepared to protect myself and my family.