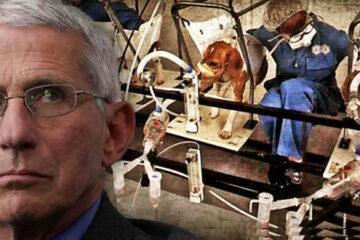 Resignation is not enough for Dr. Anthony Fauci, but that’s what the idolators at People for the Ethical Treatment of Animals (PETA) want. Most moral people want justice against Fauci, but as you know, he has now been exposed for funding the torture and murder of an untold number of dogs at your expense.

Jon Miltimore has the story at FEE.

Dr. Anthony Fauci, already facing calls for his ouster for allegedly lying to Congress about his agency’s funding of controversial genetic research at China’s Wuhan lab, is now facing political heat on a different front.

On Friday, a bipartisan group of lawmakers sent a letter to the National Institute of Allergy and Infectious Diseases (NAID) and President Joe Biden requesting information regarding allegations that the government funded experiments that injected puppies with parasites.

“We write with grave concerns about reports of costly, cruel, and unnecessary tax-payer funded experiments on dogs commissioned by the National Institute of Allergy and Infectious Diseases,” said Republican Rep. Nancy Mace of South Carolina, one of 24 lawmakers to sign the letter.

By Sunday, People for the Ethical Treatment of Animals (PETA) had joined the group of lawmakers demanding action at the National Institutes of Health (NIH).

“Yes, I think everybody who heads an NIH agency right now should resign,” said PETA senior vice president Kathy Guillermo, when asked if Fauci should resign during an interview with Newsmax.

Earlier this month, it was announced that Francis S. Collins will end his tenure as director of NIH by the end of 2021.

A Gruesome Practice—But Not A New One

The allegations, which can be read in this report from The Hill, are both stunning and terrifying. But they are not new.

In August, FEE’s Brad Polumbo wrote about the experiments NIAID, one of 27 institutes and centers that make up NIH, had allegedly funded in recent years:

According to a new exposé from the anti-animal-experimentation advocacy group the White Coat Waste Project, the National Institutes of Health spent $424,000 on a study involving the abuse of dogs. The NIH department that is specifically under the leadership of Dr. Anthony Fauci [NIAID] funded this experiment, and it ‘commission[ed] a study in which healthy beagles are given an experimental drug and then intentionally infested with flies that carry a disease-causing parasite that affects humans.’

The revelations from August, however, also were not new. As Polumbo pointed out, the White Coat Waste Project reported in 2016 that Fauci’s department was “using tax dollars to buy beagle puppies and strapping capsules full of infected flies to their bare skin.”

“More than 1,100 beagles, hounds, and mixed-breed dogs—even puppies—were subjected to experiments in government laboratories operated by the Department of Veterans Affairs (VA), Department of Defense (DOD), Food and Drug Administration (FDA), National Institutes of Health (NIH) and the Centers for Disease Control and Prevention (CDC),” the 2016 report reads. “Hundreds of the dogs were subjected to experiments involving significant pain and distress. NIH… [has] spent $5.95 million since 2011 to give dogs heart attacks. Other recent experiments include exposing dogs to anthrax, repeatedly forcing dogs to vomit, and drilling into dogs’ skulls and damaging their brains.”

A Monopoly On Violence

The revelation that US taxpayers fund gruesome experiments that intentionally infest puppies with parasites so they can be eaten by flies is likely a shock to many. The fact that it has been happening for years is probably a bigger shock.

The reality, however, is that the US government has a long history of funding and conducting gruesome experiments on animals and even on people—”research” that would land any private individual or enterprise behind bars if it ever came to light.

The 1932 Tuskegee experiment, which allowed hundreds of African Americans to go untreated for syphilis so scientists could study its effects, is perhaps the most famous such experiment conducted by the US government—but it is just one of many. Other research conducted or funded by the government—mostly in the 1940s and 1950s—included experiments that injected subjects with hepatitis, gonorrhea, Malaria, and the Asian Flu.

News records at the time made no mention of many of the experiments, NBC reported in 2011.

Many no doubt wonder how the government was able to get away with such experiments, but the answer is not difficult to find. As the economist Murray Rothbard once observed, government bestows itself with certain privileges not afforded to others in society—particularly the ability to use violence.

“The State is that organization in society which attempts to maintain a monopoly of the use of force and violence in a given territorial area,” Rothbard wrote in Anatomy of the State.

Rothbard was referring primarily to the state’s ability to raise revenue through taxation instead of trade (or charity) like everyone else. But history is replete with examples showing the state also uses its monopoly on force to exempt itself from the usual laws that govern mere individuals and private enterprises.

TRENDING: 3 Reasons Why These News Anchors from Sinclair-Owned TV Stations Are Parroting The Same Script

Why the government violates normal ethical boundaries is also no mystery. As the Nobel Prize-winning economist F.A. once observed, it’s baked into collectivist philosophy.

“The principle that the end justifies the means is in individualist ethics regarded as the denial of all morals,” the economist F.A. Hakey once observed. “In collectivist ethics it becomes necessarily the supreme rule.”

For Fauci, like his predecessors in the 1930s, 1940s, and 1950s, the end is the advancement of science (though the White Coat Waste project says injecting puppies is scientifically superfluous as well as unethical, since such experiments have already been done on mice and other rodent creatures). For the Nazis and Soviets and many other collectivist states throughout history, the end was the advancement of the party.

In both cases, the ethical violations are pursued for “a greater good.”

Means Are Greater Than Ends

Don’t expect Dr. Fauci’s experiments to stop anytime soon. It’s likely the only reason they are gaining attention is because of the much bigger scandal brewing over Fauci’s unauthorized financial support of gain of function research, something he’s denied.

Nevertheless, NIAID’s cruel experiments offer a crucial lesson on the nature of government and an important lesson on means and ends.

“Ends, goals, aims are but the hope for things to come…not…reality… from which may safely be taken the standards for right conduct,” FEE founder Leonard Read once observed. “Many of the most monstrous deeds in human history have been perpetrated in the name of doing good—in pursuit of some ‘noble’ goal. They illustrate the fallacy that the end justifies the means.”

Dr. Fauci could have learned a lot from Leonard Read.

So, the fact that the man has not been fired or resigned is only proof that he and his accessories are emboldened at the lack of justice brought by the People of the united States. When are the People going to repent towards God and then as a result of that repentance bring justice upon Fauci and every person that has aided him in his evil agenda?