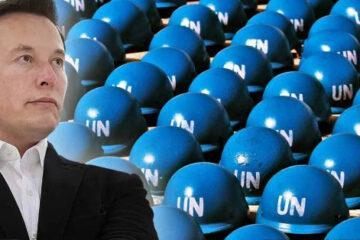 The fact of the matter is that the Lord Jesus Christ was clear about the poor when He said, “For the poor always ye have with you; but me ye have not always” (John 12:8). Yet, the antichrist, anti-American United Nations continues to blow hot air about good deeds that they never will turn into those good deeds because they are such a criminal organization. Recently, the UN claimed it could end world hunger with just 6% of Elon Musk’s fortune, and actually demanded it from him. His response? He called their bluff and they changed the goalposts so, Musk outed their sex trafficking and sex crimes for food.

Now, I’m not really a fan of Elon Musk for a number of reasons, but one must admit he was pretty shrewd in what he did.

Matt Agorist has the story at The Free Thought Project.

With Tesla Inc’s latest rally in the stock market, Elon Musk’s wealth has skyrocketed to a new milestone. His massive $335.1 billion fortune now eclipses that of Warren Buffett — three times over. Naturally, such wealth has garnered him the attention of the political class who are demanding a piece of his Tesla pie.

Even before the massive surge in the stock market on Monday, as his wealth approached $300 billion on Sunday, the establishment media began calling for Elon to offer up some of that cash money.

David Beasley, the director of the UN’s World Food Program, who said billionaires need to “step up now” — worked in concert with CNN misinformation — and put out an article demanding $6 billion from Musk to end world hunger.

“Six billion dollars to help 42 million people that are literally going to die if we don’t reach them. It’s not complicated,” he said.

Little did Beasley and CNN know, but Musk was about to call their bluff, and shortly after Beasley’s tweet, Musk offered up the $6 billion.

Musk tweeted that if the UN program can “describe on this Twitter thread exactly how $6B will solve world hunger, I will sell Tesla stock right now and do it.” He called on transparent and open accounting. But CNN’s headline was not transparent from the beginning and caused confusion out of the gate.

Once Beasley saw the false CNN headline, he was forced to correct it, and CNN was forced to issue an update. However. he still asked for a meeting with Elon.

The $6 billion claims began to crack apart once others began digging into the UN’s past spending and the non-existent effect it had on the world’s growing hunger problem thus far.

As Beasley and Musk went back and forth on Twitter, many folks chimed in and pointed out how the UN programs may have good intentions but are rife with waste and corruption. Even Musk chimed in with an article from 2015 which exposed an utterly horrifying practice by supposed UN “peacekeepers.”

“What happened here?” Musk asked, tweeting an article from the Express which detailed how UN officials were forcing children as young as 9 to give them sex for food.

Over the years, TFTP reported on this nightmare in detail and the problem of UN officials — including high-level ones — raping children, is so widespread that the victims total in the tens of thousands.

In 2018, the UN released a report describing this widespread practice, and it reads like a nightmare.

“Agency workers from local and international NGOs as well as UN agencies are among the prime sexual exploiters of refugee children often using the very humanitarian assistance and services intended to benefit refugees as a tool of exploitation. Male national staff were reported to trade humanitarian commodities and services, including medication, oil, bulgur wheat, plastic sheeting, education courses, skills-training, school supplies etc., in exchange for sex with girls under 18. The practice appeared particularly pronounced in locations with significant and established aid programs.”

One would think that this report would have curtailed at least some of the abuse when a portion of it was publicly released 16 years prior. However, that appears not to have happened. As TFTP reported in 2018, an outright frightening dossier released by a former senior United Nations official revealed that United Nations employees have carried out over 60,000 rapes in just the last decade. What’s more, the dossier estimates that the organization currently employs at least 3,300 pedophiles.

In just ten years, under the guise of rendering aid, the United Nations has literally been raping and pillaging countries across the world. The problem has gotten so out of hand that it prompted the former UN insider, Andrew Macleod, to blow the whistle and hand over the evidence to Britain’s Department for International Development (DFID) Secretary Priti Patel.

According to the exclusive report by the Sun, the dossier reveals that on top of the 3,300 pedophiles working for the organization, thousands more “predatory” sex abusers specifically target aid charity jobs to get close to vulnerable women and children.

According to Macleod, anyone who’s attempted to blow the whistle on the horrifyingly rampant abuse is silence and fired.

Sharing his dossier with The Sun, Prof MacLeod warned that the spiraling abuse scandal was on the same scale as the Catholic Church’s.

While the report reveals that there were 3,300 employees in 2018 who are active pedophiles on the UN’s payroll, Macleod estimates the real number to be far higher.

“There are tens of thousands of aid workers around the world with pedophile tendencies, but if you wear a UNICEF T-shirt nobody will ask what you’re up to.

“You have the impunity to do whatever you want.

“The system is at fault, and should have stopped this years ago.”

But they have not, and instead demand money from Elon Musk.

If Musk gives these people $6 billion, it is no wonder that he would like to see how every single penny is spent. As his tweet clearly illustrates, he sees the problem inside th UN. Despite the problem of child rape being well known for years inside the UN, it appears that they can’t even solve that problem, so how on earth are they going to end world hunger?

TRENDING: Anjem Choudary & 4 Other Muslims Linked to London Bridge Jihad Attack Set To Be Let Out Of Jail By End Of Year

The UN has had scandal after scandal concerning money and sex, plus a number of other things. Don’t you think it is time the US abandon the UN and kick them off our shores? They are not worth a dollar given to them to exist in the world. They do not have mankind’s best interests nor freedom in mind, but rather its destruction and slavery.