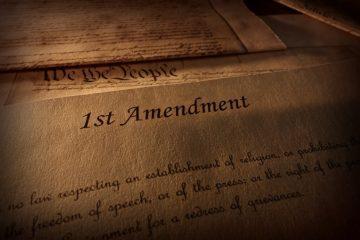 WASHINGTON, D.C. — The Rutherford Institute has asked the U.S. Supreme Court to protect the First Amendment right of all Americans to speak out against government misconduct, corruption and abuse of power without fear of retaliation. In an amicus brief in Houston Community College System v. Wilson, attorneys for The Rutherford Institute, the ACLU and the Institute for Free Speech are challenging the power of legislative bodies to censure and penalize their members for speaking out about matters of public concern, especially when such punitive actions result in tangible losses.

“At its core, the First Amendment is intended to protect the right of all Americans to criticize government officials without fear of retaliation. In fact, the First Amendment does more than give us a right to criticize our country—it makes it a civic duty,” said constitutional attorney John W. Whitehead, president of The Rutherford Institute and author of Battlefield America: The War on the American People. “Any legislature that seeks to censure and punish a member for exercising that right to free speech is not only suppressing that member’s speech but suppressing the constituents represented by that individual.”

Historically, legislatures have been empowered to publicly discipline their members through the act of “censure.” However, that power to censure public officials for criticizing legislative bodies about matters of public concern has increasingly come under scrutiny in recent years. For example, David Wilson, who served on the Board of Trustees of the Houston Community College System (HCC) from 2013-2019, was censured while serving as a trustee for challenging Board practices which he believed to be corrupt. The Board’s bylaws set rules for the conduct of trustees and allows the Board to censure trustees who violate those rules. The HCC oversees the operations of public community colleges in the greater Houston area. While the HCC’s Board has significant government powers, including the power to tax, exercise eminent domain and control the budget of the system, it has been plagued with allegations of corruption and self-dealing that have resulted in numerous investigations of Board trustees and a federal indictment of a trustee for extortion and bribery.

Wilson has been vocal about his opposition to corruption and mismanagement and has publicly criticized the HCC Board for its highly-controversial decision to establish a community college in Qatar and for trustees taking favors from Qatar officials. Wilson also launched a telephone campaign to blow the whistle on how HCC funds were being misspent on the Qatar college and other projects, and filed a lawsuit to prevent Board members from violating the bylaws by voting remotely. In response, the Board adopted a resolution censuring and disciplining Wilson, making him ineligible for officer positions on the Board and for reimbursement of college-related travel, and restricting his access to funds for community affairs. Wilson again sued the Board, claiming that his censure and the punishments imposed constitute retaliation for his speech in violation of the First Amendment. Although his constitutional claim was dismissed by the district court, the federal circuit court reinstated the lawsuit, acknowledging that the censure was intended as retaliation. In their amicus brief before the Supreme Court, The Rutherford Institute and its coalition partners argue that because Wilson suffered tangible losses, such as being denied access to funds, he is entitled to the First Amendment’s protection against government retaliation for speech on matters of public concern.