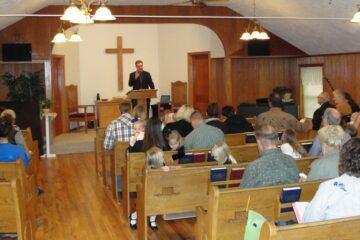 DOVER, Del. — Attorneys affiliated with The Rutherford Institute have filed suit against the governor of Delaware in the hopes of preventing him from using his emergency powers again in the future to restrict religious gatherings and practices. The preemptive legal action in Hines v. Carney, which was brought on behalf of a Delaware pastor, comes a year after The Rutherford Institute reached a settlement with the State of Delaware over its First Amendment lawsuit challenging discriminatory COVID-19 restrictions that applied to churches but not big-box shopping stores, liquor stores, and guns shops. Although Delaware promised under the 2020 settlement in Bullock v. Carney not to reissue rules targeting churches that limit the number of persons who can worship, the number of services that can be held, and how churches conduct rituals such as baptism and communion, Governor John Carney could still employ “neutral rules of general applicability” to shut down houses of worship and affiliated ministries.

Rutherford Institute affiliate attorneys Thomas S. Neuberger and Stephen J. Neuberger were instrumental in advancing the lawsuit on behalf of the right of churches and other religious ministries to the free exercise of religious worship under the Delaware Bill of Rights.

“A pandemic doesn’t override the Constitution. While the government insists it has a compelling interest in restricting gatherings, assemblies and movement in public in order to minimize the spread of this virus, these “emergency powers” very quickly become a slippery slope to a total lockdown mindset,” said constitutional attorney John W. Whitehead, president of The Rutherford Institute and author of Battlefield America: The War on the American People. “What we must guard against, more than ever before, is the tendency to become so acclimated to these COVID-19 restrictions—lockdowns, authoritarian dictates, and police state tactics justified as necessary for national security—that we allow the government to keep having its way in all things, without any civic resistance or objections being raised.”

In March 2020, Delaware Gov. John Carney declared a state of emergency relating to the COVID-19 pandemic and soon after issued additional emergency orders limiting the size of gatherings within the state. By April 1, the Governor had ordered that no indoor gatherings of more than 10 persons could be held. The ban on gatherings was specifically applicable to churches and “strongly encouraged” houses of worship to transition to remote services by video or telephone. However, the ban on gatherings contained numerous exceptions, allowing more than 230 big-box shopping stores, liquor stores, and guns shops to be open without having to abide by a 10-person restriction. Rev. Bullock, the pastor of Canaan Baptist Church, who was holding on-line services for his 2500-member congregation, sought to challenge what he saw as unequal and unfair treatment of churches under the Governor’s emergency restrictions, especially when compared to the less strident restrictions imposed on big-box shopping stores, liquor stores, and guns shops. After Rutherford Institute attorneys filed a First Amendment lawsuit challenging the governor’s discriminatory emergency restrictions for churches, Delaware officials eventually rescinded their attempts to dictate to churches about how best to minister to their congregants during a pandemic.

November 13, 2020 • Delaware Promises Not to Re-Impose Discriminatory COVID-19 Restrictions Against Churches in a Victory for Religious Freedom

June 4, 2020 • In a Major Victory for the Right of Churches to Be Free of Government Meddling, Delaware Rescinds COVID-19 Restrictions on Worship Services

The complaint in Hines v. Carney