Two weeks ago, when showing the uncanny correlation between defaults and the unemployment rates, we predicted that the number of Chapter 11 filings that is about to flood the US will be nothing short of biblical.

All that was missing was a catalyst… and according to Bloomberg that catalyst arrived in the past week or so, as retail landlords have been sending out thousands of default notices to tenants, who in turn have experienced a collapse in foot traffic, sales and cash flow due to the COVID-19 pandemic, and are simply unable to pay their debt obligations.

According to Bloomberg, restaurants, department stores, apparel merchants and specialty chains have been receiving notices from landlords – some of whom have gone as long as three months without receiving rent.

Pressure from default notices and follow-up actions like locking up stores or terminating leases was cited in the bankruptcies of Modell’s Sporting Goods and Stage Stores Inc. Many chains stopped paying rent after the pandemic shuttered most U.S. stores, gambling that they could hold on to some cash before landlords demanded payment.

The stakes are enormous, and landlords are suffering, too. An estimated $7.4 billion in rent for April hasn’t been paid, or about 45% of what’s owed, according to a recent analysis by CoStar Group, which also found that just a quarter of of expected rent payments have been received by landlords.

“If the landlords don’t put a pause on their actions, you’re going to see more bankruptcies.”

The question then becomes who will bail out the landlords, and whether their creditors will be just as generous in accepting forbearance.

That said, receipt of a default notice don’t necessarily mean a retailers will get booted anytime soon, especially since there is nobody waiting in line for the real estate: some landlords are merely sending letters to preserve their legal rights while discussing the situation with tenants, and to assure their spot as a prepetition creditor once the default tsunami begins in earnest.

One such company, Simon Property Group Inc., says it’s in active negotiations with merchants at its malls, and has been taking their tenants’ financial status into account. “The bottom line is, we do have a contract and we do expect to get paid,” said CEO David Simon during the company’s May 11 earnings call.

“The landlords do have the legal contract,” said Green Street Advisors senior analyst, Vince Tibone. “However, from a practicality standpoint, a lot of these retailers are on the brink of bankruptcy and simply cannot pay right now.”

However, as noted above, landlords are of course still stuck with their own bills – including bank debts which they’re expected to pay. On Thursday we reported that US malls are in a crisis which started in January as vacancies hit a record high.

And earlier Friday we reported that US retailers have accounted for the bulk of defaults over the past two months, as they were forced to temporarily close stores in response to the COVID-19 pandemic. 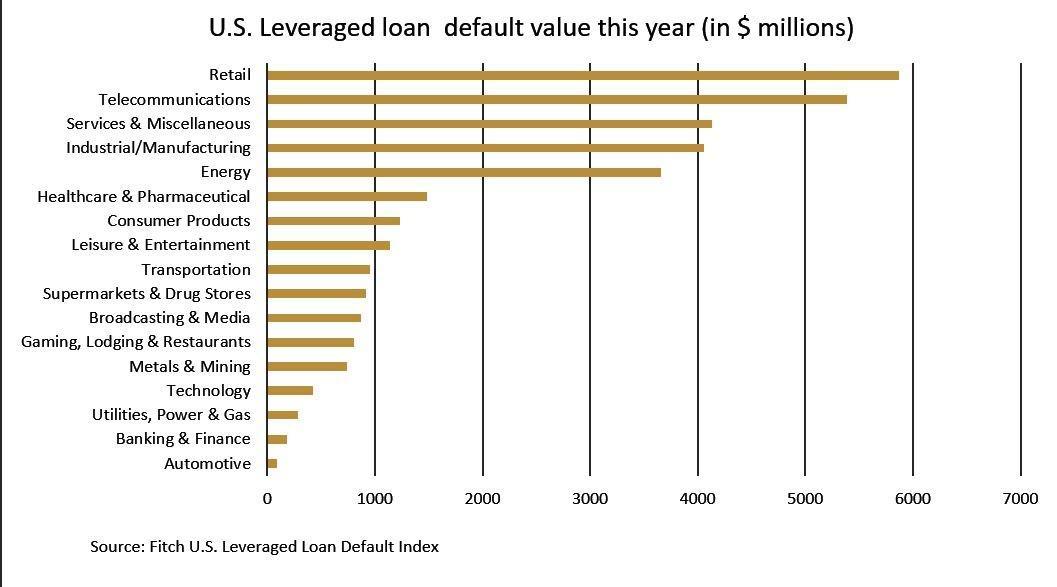 Retailers Neiman Marcus Group, J.Crew and J.C. Penney have already filed for Chapter 11 bankruptcy protection this month in the United States. But the real bankruptcy wave was just waiting for the unspoken covid-related grace period to end, and for the default notices to start flying.

The letters began arriving in March and early April, “but the rate of such notices picked up materially in late April and early May,” Stage Stores said. Some landlords began locking the company out “and threatened to evict the debtors and dispose of the in-store inventory.” The company also said that “responding to and managing these default notices and related litigation outside of Chapter 11 would have been a monumentally difficult task.”

“It’s not like there’s a lot of investors out there looking to buy retailers in a Chapter 11,” said Grasier, adding “Landlords and retailers need to really come together and realize that this a shared pain.”

Some landlords get it, according to Tom Mullaney, managing director of restructuring at real estate services firm Jones Lang LaSalle. Retailers he represents are getting default letters that are understanding and sympathetic; other landlords strike a more combative tone.

What’s more interesting is the action, or lack of it, by the landlords afterward, Mullaney said. “In a lot of cases, the letters that are being sent aren’t being followed up on,” he said – the landlords are simply preserving their legal rights. Maybe they just don’t have the fund to retain lawyers?

Others, meanwhile, are just taking the law into their own hands: some property owners have run out of patience and have locked out Mullaney’s clients. “The environment is getting pretty testy and emotional on both sides of the table,” he said. “The only thing worse than being a retailer right now is being a retail landlord.”

I Can’t Do This Without YOU!!!