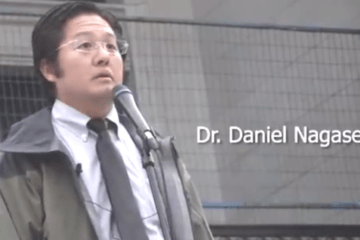 A Canadian doctor, who was banned from working in the Alberta hospitals because he provided his patients with unapproved treatments for what is being called COVID-19. However, he has spoken out on what is going on and he believes we are witnessing a “pandemic caused by vaccination.

Nagase graduated from Dalhousie University in 2004. He has worked as an emergency doctor for 10 years. Nagase practiced medicine in rural communities in Alberta in 2015.

Dr. Daniel Nagase was relieved of his duties in September after treating his patients with unapproved treatments. He is an emergency doctor with locum privileges helping in Alberta hospitals.

However, Dr. Nagase alleges that he was removed for administering Ivermectin to patients.

His speech earlier this month at an event that commemorated the Nuremberg Trials went viral.

Nagase said he is not against vaccines, but said “there’s never been anything like this given to humans,” referencing the mRNA COVID-19 vaccines.

“Medically speaking, scientifically speaking, this is a lot closer to gene therapy than it is other vaccines that have been put out in history,” Nagase said adding he has not had a COVID-19 shot yet.

Nagase said his life has been turned upside down since he began to speak out about his experience being relieved of duty for treating COVID-19 patients with Ivermectin, but added, “I wouldn’t have it any other way.”

Since his message has gone viral on social media, Nagase said he’s been able to reach more people with his message that “Ivermectin is a safe medication for coronavirus 19.”

Nagase has researched trials in other countries and said, “in every single one of those studies, Ivermectin worked. In moderate COVID and mild COVID mortality is reduced to zero.”

Also concerning to Nagase is that doctors are being prevented from treating patients as they would have been able to in the past.

“What they did is something that has never been done in 200 years of medical history. They banned doctors from trying a medication and banned patients from receiving it,” said Nagase of how Ivermectin was prohibited from being prescribed and used to treat COVID-19 in Canada.

Nagase has been banned from hospital practice in all AHS facilities, but is still able to practice if he opened his own office. However, Nagase said as of Monday, the College of Physicians and Surgeons of Alberta has asked him to voluntarily withdraw his licence.

“And usually when they demand you voluntarily withdraw your licence, it’s because they are leading up to involuntary revocation of your license,” he said.

Nagase also slammed the Alberta government for its handling of the health crisis.

“It has been completely anti-science,” Nagase said who went on to explain “when healthy people wear masks, you are actually driving the evolution for any virus to overcome that mask.”

“This is a pandemic caused by the vaccinations and were talking about high school level biology.

“I’m worried that we are living through the greatest propaganda campaign in human history,” Nagase said when asked why he believes there is such conflicting information around the pandemic.

When asked how he would have handled dealing with the pandemic, Nagase said, “two weeks to flatten the curve and that’s it. Isolate only the people that are at high risk of dying — that’s all.”

TRENDING: Biden’s Own Words Regarding Ukraine Now Being Used Against Him In Times Square

This entire plandemic is more than just about what Nagase is talking about. The entire thing has been to corner people into taking these worthless, deadly COVID shots while Big Pharma makes billions at the People’s expense and the People lose their liberties. The people must awaken to the fact that their fascist governments have been protecting Big Pharma and have become the enemies of the People. They then must begin to bring justice upon the heads of these wicked men.