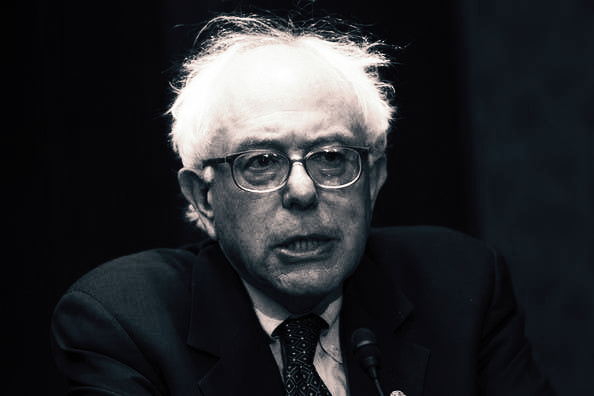 Sanders is the only real outlier in the dwindling field of political candidates for president. The rest of the crowd is made up of milk toast Democrat establishment types who offer absolutely nothing but platitudes and promises. There is no real energy behind any of the other candidates. Bernie’s bony old fist shaken at America is what catches the eye of US malcontents. These Bernie followers are charged up, and ready to rumble. Can anyone say the same for the supporters of Warren, Biden, or Buttigieg? Bloomberg helps Sanders by providing an example of everything Bernie fights against.

You’ve probably watched the Project Veritas videos depicting the violent call to arms espoused by many of Bernie’s campaign leaders. Sanders did not adamantly speak against them, nor apologize for their comments with any sincerity. We can expect to see real-life demonstrations of their threats as the primaries advance and Bernie gets screwed by the Democrat establishment once again. It has already happened in Iowa and will probably continue in New Hampshire next Tuesday, as Buttigieg closes the gap.

Bernie’s counting on getting screwed–but why?

No one likes to have the establishment coming down on their heads—no one but Bernie. His “us against them” mantra is what fuels the rage in his followers and keeps those small donations flowing. Well, you say, who cares about a few crackpots throwing ten-dollar bills at the old geezer? Those small donations are huge for some of his people, money donated that would have gone against the gas or food bill. This is money that has a lot of energy and sacrifice, and resentment attached to it. It’s a real investment, not a luxury.

More importantly, Bernie’s army of small donors is also an army of angry malcontents. They aren’t looking for change at the ballot box, they want to see America burned to the ground, and they are willing to take to the streets to see it happen. They’ve been shut out of a system they’ve learned to hate. They don’t trust elections or people who win them, and the Iowa caucus underscored their reason for remaining skeptical.

Bernie is building the foundation for a viable Third Party. Call it the Socialist Party or Communist, or Workers… the name doesn’t really matter. The potential membership is growing daily, and to them, there isn’t a whit of difference between the Republicans and the Democrats. They know their hero has been betrayed by the establishment and they are tired of it.

Did I mention anger?

CNN did a study of the impact of Sanders’ followers bullying supporters of other candidates and groups which endorse them. Death threats sprinkled in with foul language was common. Although, from time to time, Sanders technically has called for civility, his followers are showing no signs of listening or pulling back. They recognize a wink and a nod when they see one.

Expect to bear witness to brutal aggression leading up to the nomination, and they will burn the house down if they don’t get their way.

Other than a few pissed off socialists who’s going to follow him?

To make matters worse for the Democrat Party, Sanders is doing better with Hispanic voters than any of the other candidates. With his offers of freebies and open borders, it isn’t difficult to imagine Bernie luring a significant number in this group away from the Democrat Party. Add to this the fact that a huge percentage of Latinos are employed in the service sector and members of the Service Employees Union and now you’re looking at some power players behind Sanders.

Plus, with a recent push by government employees to have the right to use collective bargaining, if Sanders made that part of his platform he could carve out a chunk of voters from that group, also. Remember it was Sanders who was responsible for making it difficult to fire government employees. At one time Bernie wanted to guarantee a government job for everyone!

Employees in low paying jobs, or working for large wealthy corporations love Sander’s push for raising the minimum wage and forcing corporations to set aside big blocks of their stock to be owned by the employees.

The Democrats have their foot caught in a bear trap.

The Dems can’t openly denounce Sanders without chasing off a crucial voting segment, young people. They can’t let Sanders win because he can’t beat Trump—certainly not in this economy. Socialism only appeals to the masses when times are hard. If Sanders gets the nomination, many moderate Democrats will either stay home or cross over and vote Trump. That will affect the House and Senate races bigly.

Sanders is picking up steam, and Buttigieg seems to be the only candidate who can catch him, but he has to resort to caucus shenanigans and canned applause to do it. Every time Bernie gets screwed, his followers increase exponentially.

One Percent Democrats Have Little In Common With Ordinary Americans

Pelosi and House Democrats are very unpopular following the impeachment debacle. They will have a hard row to hoe keeping the majority. Democrats don’t even believe they have a chance of taking over the Senate this time. I can’t remember a time when things looked this bad for Democrats, not even 1994.

Time to Chew Off Their Foot?

Is it time for the Democrat Party to accept a temporary loss in 2020, let Sanders get the nomination and hope for the best? It may be the only way to stave off Bernie carving out his voters and setting up a Socialist Third Party.

Yeah but Third-Parties Never Get Anywhere

Enter Soros, AOC and the millions they would throw at a Socialist Party. Well-funded and a definite Party outsider, AOC could be counted on to sway a number of young people to register with Bernie’s party. He won’t live forever and I’ll bet there are others even more experienced in the nuances of politics who would be willing to jump ship for the chance to take it over when Sanders goes.

With a shrinking middle class and huge discrepancies in wealth across America, a Worker’s Party is on the horizon, or closer, and there’s no louder voice (or should I say croak) than Bernie’s. He may not have accomplished a lot in politics, but he has a high profile standing up for the little guy with issues like the $15 dollar minimum wage. The little guys and gals just don’t know Uncle Bernie is leading them over a cliff.