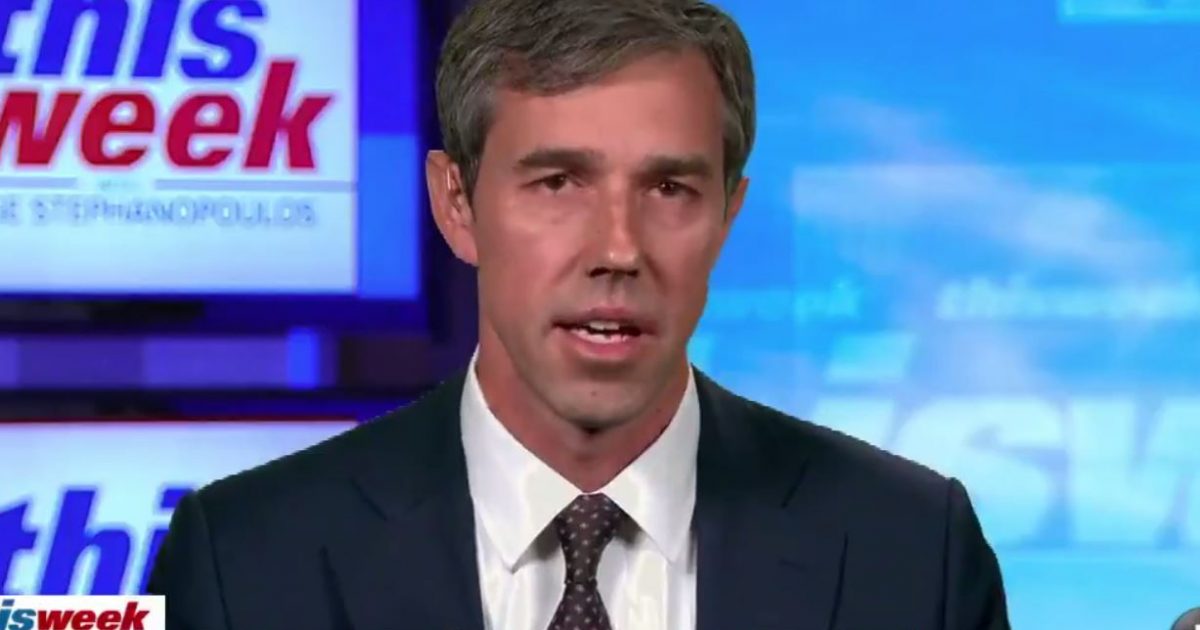 While appearing on Sunday’s edition of ABC’s “This Week,” Robert Francis “Beto” O’Rourke told George Stephanopoulos he believes that President Trump committed a crime, even though there is no evidence to support that claim, and promised to prosecute him if he wins the White House in 2020.

“We heard House Speaker Nancy Pelosi say this week, she wants to see the president in prison. Do you think the president committed crimes that could be prosecuted?” Stephanopoulos asked.

“He did,” O’Rourke claimed.

He had more to say, according to a partial transcript posted by Breitbart:

O’ROURKE: …I think that’s clear from what we have learned from the Mueller report. But I think those crimes might extend beyond what we have seen in the Mueller report; using public office for personal gain, for himself and for his family, the relationship that he has with Vladimir Putin, which has never been properly explained from the invitation as a candidate to have Russia involve itself in our election, his efforts to obstruct justice, the fact that he called Vladimir Putin after the Mueller report was released, called it a hoax, thereby giving him a green light to further participate in our democracy and our elections. If we don’t hold the president accountable we’ll set the precedent that some people in this country, because of their position of power, are in fact above the law. And if we do that, we’ll lose this democracy forever. Regardless of the popularity of the idea or what the polling shows us, we must proceed with impeachment so we get the facts and the truth and at end of the day there’s justice for what was done to our democracy in 2016.

STEPHANOPOULOS: Even if the House impeaches, the Senate isn’t going to convict the president. If you win in 2020, would you the Justice Department to pursue charges against President Trump?

O’ROURKE: I would want my Justice Department, any future administration’s Justice Department to follow the facts and the truth and to make sure at the end of the day there’s accountability and justice, without this, without that, this idea, this experiment of American democracy comes to a close. We were attacked unlike any other time in our 243-year history and we have a president who yet to acknowledge it and a president who has yet to be brought to justice. Yes, no matter who that is.

Of course, what O’Rourke is really saying here is that he wants to prosecute Trump for ridiculous conspiracies made up by Democrats and their allies in the Democrat-media complex, a.k.a., the “mainstream media.” And for beating Crooked Hillary Clinton in 2016. Naturally, this is the kind of insane claptrap his low-information liberal base wants to hear.

Here’s video of his ridiculous statement:

"He did," Beto O'Rourke says when asked if Pres. Trump committed crimes that can be prosecuted.

Talk about living in an alternate reality. But then again, this is the same Beto O’Rourke who once ate dirt after getting beat by Ted Cruz…