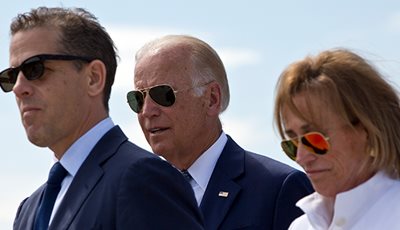 They evidently paid Hunter Biden millions of dollars to just stay away from the office.

Hunter Biden got $50,000 a month in salary and NEVER had to come to the home office.

This looks bad for The Bidens.

No one has yet provided an adequate answer as to how Hunter Biden got a job on Burisma’s board, having absolutely no experience in either energy or Ukraine, apart from having a father serving as Vice President of the US. Reuters tries to unravel another mystery today — just what did Biden fils do on the board once he got the job? “He was a ceremonial figure,” one of their sources at Burisma tells their reporting team, one who never bothered to come to Ukraine at all in the five years he worked as a director for the Ukrainian energy company:

During his time on the board of one of Ukraine’s largest natural gas companies, Hunter Biden, the son of former U.S. Vice-President Joe Biden, was regarded as a helpful non-executive director with a powerful name, according to people familiar with Biden’s role at the company. …

Interviews with more than a dozen people, including executives and former prosecutors in Ukraine, paint a picture of a director who provided advice on legal issues, corporate finance and strategy during a five-year term on the board, which ended in April of this year.

Biden never visited Ukraine for company business during that time, according to three of the people.

Biden got $50,000 a month in salary and never had to come to the home office? That’s quite a gig, especially for a corporate board director. Normally, those positions involve responsibility for overseeing the operations of the organization and ensuring regulatory compliance, which is tough to do when one never sets foot in the country where the corporation operates.

So what was his purpose, beyond sucking up money and whatever “ceremonial” duties Biden could perform from afar? Three guesses:

Oleksandr Onyshchenko, a businessman and former member of the Ukrainian parliament who knows the Burisma founder, said it had been Zlochevsky’s idea to appoint Biden as a director. “It was to protect (the company)” at a time when it was facing investigations, said Onyshchenko, who left the country in 2016. In the run up to Biden’s appointment, a popular uprising led to the removal of the Russian-backed Yanukovich in February 2014.

Why would Biden be important in that context? Zlochevsky served as a minister in Yanukovich’s government prior to his ouster and would have been viewed with deep suspicion by both the new government in Kyiv and the US as compromised by Russian ties. That would have been even more the case after the February 2014 seizure of Crimea by Russia as retaliation for chasing Yanukovich out of the country. Zlochevsky hired Hunter and his business associate Devon Archer to the board in April 2014 as Russia continued consolidating their grip on Crimea.

So Hunter Biden was getting $50,000 a month for “his celebrity” alone?

Does anyone believe that?

When it stinks like bull crap it probably is bull crap.

What would you bet that part of that Biden deal to get rid of the prosecutor also involved employment benefits for his alcoholic, drug-addicted son?

Maybe not, because that’s too simple.

But the list of Democrat dealings with Ukraine continues to grow, while we have still seen no proof that Trump did anything wrong.

This is just more evidence that the real guilty parties in Ukraine are not Republicans and not our President.

We are up against it folks.

We must expose the crooked Dems who are trying to impeach The People’s President.