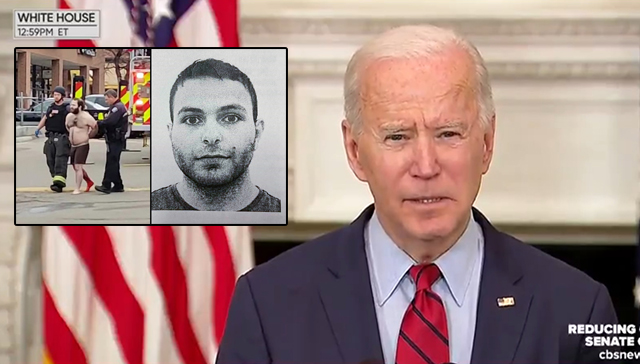 The Biden regime is moving to ensure Americans are made even more defenseless after a Syrian Muslim immigrant was identified as the suspect accused of carrying out a deadly mass shooting in Boulder, Colorado.

President Biden: "We can ban assault weapons and high-capacity magazines in this country once again. I got that done when I was a senator. It passed, it was the law for the longest time and it brought down these mass killings. We should do it again." https://t.co/RRG9ImW8JW pic.twitter.com/KniEdGZ1iY

The move to change the topic from so-called “white supremacy” to gun control came right after the shooter was identified as 21-year-old Ahmad al-Aliwi al-Issa, whose alleged Facebook posts indicate to be a devout Muslim whose family immigrated from Syria.

The #Boulder, Colo. mass shooting suspect who is accused of killing 10 people is an immigrant from Syria. His full name is Ahmad al-Aliwi al-Issa. His online posts show he was a deeply religious Muslim. pic.twitter.com/57vokI5jFz

Looks like the shooter is of Muslim descent. By the rules of "journalism" we'll be talking about the weapon rather than ideology or motive this time. pic.twitter.com/Tnu6GUZ8eS

As congresswoman Marjorie Taylor Greene pointed out, Colorado already has the majority of the strict gun control measures the left demands but it failed to stop “a thug like Ahmad Al-Issa from murdering Americans.”

While the Biden regime is working overtime to disarm Americans and ensure they cannot protect themselves from mass shooters like al-Issa, they’re simultaneously working to bolster the number of so-called “refugees” brought in from places like al-Issa’s own country of Syria.

Biden administration plans to raise the annual refugee cap to 125,000 people, per two sources — following thru on a campaign pledge. The refugee cap now is 15,000, a historic low https://t.co/6wNOniyrEW

The Biden regime also is moving to expand our intake of “refugees” while actively expanding the war in Syria and setting up a new military base in northeastern Syria at the Iraq-Syria-Turkey triangle.

One more #US convoy consisting of 30 vehicles were seen entering #Syria via al Waleed border crossing from #Iraq pic.twitter.com/m77zzG92AW