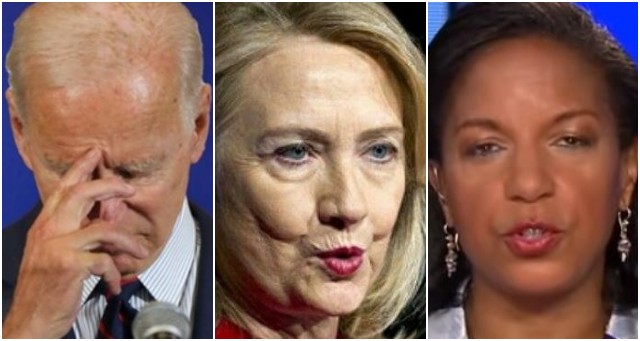 I’ll start this article by praising Tom Fitton and the crew at Judicial Watch which has been the leader of exposing the corruption of the Obama administration as well as tons of other scandals and we are huge supporters of these great patriots.

Judicial Watch: Susan Rice Admits Under Oath She Emailed with Hillary Clinton on Clinton’s Non-Government Email System and Received Emails Related to Government Business on Her Own Personal Email Account

(Washington, DC) – Judicial Watch announced today that former Obama National Security Advisor and U.S. Ambassador to the United Nations, Susan Rice, admitted in written responses given under oath that she emailed with former Secretary of State Hillary Clinton on Clinton’s non-government email account and that she received emails related to government business on her own personal email account. Rice’s 2019 sworn written answers are available here.

The State Department objected to all questions, instructions and definitions posed to Rice in Judicial Watch’s court-ordered deposition and “does not recall” almost everything else, including conversations with Clinton.

In responding to each of the 13 questions asked of her, Rice claimed 18 times that she “does not recall” critical information.

Rice’s interrogatory responses come in a Freedom of Information Act (FOIA) lawsuit that seeks records concerning “talking points or updates on the Benghazi attack” (Judicial Watch v. U.S. Department of State (No. 1:14-cv-01242)). This FOIA lawsuit led directly to the disclosure of the Clinton email system in 2015. Judicial Watch uncovered “talking points” created by the Obama White House and other documents showing that statements about the attack made on the eve of the 2012 elections by then-National Security Advisor Susan Rice were false.

Judicial Watch’s discovery is centered upon whether Clinton intentionally attempted to evade the Freedom of Information Act (FOIA) by using a non-government email system and whether the State Department acted in bad faith in processing Judicial Watch’s FOIA request for communications from Clinton’s office.

“Susan Rice didn’t recall much about the Obama administration’s response to the Benghazi terrorist attack,” said Judicial Watch President Tom Fitton. “Similarly, Hillary Clinton couldn’t recall much in her written sworn responses to Judicial Watch questions – which is one reason why a federal court judge ordered her in-person deposition testimony.”

On March 2, 2020, Judge Lamberth granted Judicial Watch discovery that includes taking testimony from Clinton and Mills, under oath, regarding Clinton’s emails and the existence of records about the Benghazi attack. Clinton and Mills filed an emergency mandamus appeal to avoid testimony. Their petition is still pending before the U.S. Court of Appeals for the District of Columbia Circuit.