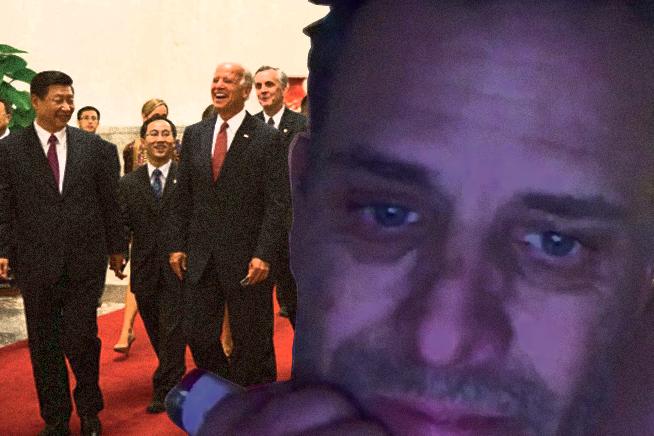 Bombshells are rolling out so fast on the Biden family corruption, that it’s difficult to keep up with all of the scandals. While Giuliani, Bannon, and Lude Media have been exposing evidence from Hunter Biden’s laptop, Matthew Trymand, Peter Schweizer, and Seamus Bruner have been unveiling additional corruption schemes that they have extracted from Bevan Cooney’s email account, with his permission. Several other media sources have been given access to the laptop and have also been reporting on their findings. It’s an ongoing avalanche with no end in sight. This list of shocking headlines, backed with emails, texts, documents, photos, videos, and audio recordings, should help to show just how explosive this is, how the Biden’s have sold out America, their potential sex abuse of minors, and that Joe Biden isn’t the good Catholic he tries to portray himself to be.

Developments in the Story & Investigation

This report not only details examples of extensive and complex financial transactions involving the Bidens, it also describes the quandary other U.S. governmental officials faced as they attempted to guide and support Ukraine’s anticorruption efforts. The Committees will continue to evaluate the information and evidence as it becomes available.

The Federal Bureau of Investigation (FBI) has reportedly had evidence that former Vice President Joe Biden met with an executive from Burisma introduced by his son, Hunter, since the week in December 2019 when the House impeached the president…It is not clear why the FBI never released or acted on the evidence it reportedly seized, which supported Trump’s case.

Twitter has refused to unlock The Post’s account unless the news organization deletes six tweets about its own reporting on Hunter Biden’s emails — despite a policy change sparked by outrage over that very same social-media suppression of the stories.

Documents obtained by Fox News appear to show Hunter Biden’s signature on paperwork from the Delaware computer repair shop where the former vice president’s son reportedly dropped off a laptop that included emails related to his overseas business dealings.

The FBI’s subpoena of a laptop and hard drive purportedly belonging to Hunter Biden came in connection with a money laundering investigation in late 2019, according to documents obtained by Fox News and verified by multiple federal law enforcement officials who reviewed them.

The business partner of Hunter Biden who flipped on the Biden family from prison provided access to 26,000 emails, Breitbart News senior contributor Peter Schweizer said in a Saturday morning radio appearance…That “underbelly” of how the Biden family—Schweizer calls them the “Biden Five,” whereas President Donald Trump calls them the “Biden Crime Family”—operates is further exposed in these emails from Hunter Biden’s flipped former partner Bevan Cooney.

“…natives and unions I guess….plus government relations etc.” “I wanted to focus on the “other currency” we are bringing to the table….direct administration pipeline.” “Maybe we should also remind of HB’s dad’s union relationships to justify the ask??” “I don’t think we actually want Hunter CEO of anything.” “One big is that Zuckerberg is investing in the Veterans vertical.” “Facebook zuckerberg???” “Yes”

The never-before-revealed meeting is mentioned in a message of appreciation that Vadym Pozharskyi, an adviser to the board of Burisma, allegedly sent Hunter Biden on April 17, 2015, about a year after Hunter joined the Burisma board at a reported salary of up to $50,000 a month. “Dear Hunter, thank you for inviting me to DC and giving an opportunity to meet your father and spent [sic] some time together. It’s realty [sic] an honor and pleasure,” the email reads.

In the post Derkach says that laptop ‘was given to Ukrainian law enforcement’ and that Burisma representatives were now serving as ‘witnesses in criminal proceedings.

“Hunter Biden received $3.5 million dollars from the former mayor of Moscow’s wife, Yelena Baturina. That money was referred to first publicly in a Senate report by Ron Johnson’s office. What you’ve discovered in these emails may be the reason that they were paid that money.” Hunter Biden’s partners were helping her open U.S. banking accounts. “Yelena Baturina, who he [Devon Archer] said, had invested over $200 million dollars in various investment funds” with his firm…

One email sent to Biden on May 13, 2017, with the subject line “Expectations,” included details of “remuneration packages” for six people involved in an unspecified business venture…In addition, the email outlined a “provisional agreement” under which 80 percent of the “equity,” or shares in the new company, would be split equally among four people whose initials correspond to the sender and three recipients, with “H” apparently referring to Biden…The deal also listed “10 Jim” and “10 held by H for the big guy?”

Newly obtained emails from a Hunter Biden business partner lay out in detail how the Vice President’s son and his colleagues used their access to the Obama-Biden administration to arrange private meetings for potential foreign clients and investors at the highest levels in the White House. These never-before-revealed emails outline how a delegation of Chinese investors and Communist Party officials managed to secure a private, off-the-books meeting with then-Vice President Joe Biden.

One of the people on an explosive email thread allegedly involving Hunter Biden has corroborated the veracity of the messages, which appear to outline a payout for former Vice President Joe Biden as part of a deal with a Chinese energy firm….Sources told Fox News that “the big guy” is a reference to the former vice president.

Hunter Biden – in an audio file labelled “Most Genius Shit Ever” – appears to be referencing Patrick Ho, who was a former Secretary for Home Affairs in Hong Kong, as a “spy chief of China” while lamenting how his business partner Ye Jianming of CEFC China Energy had disappeared.

Rudy Giuliani explains how Joe Biden was sent to Iraq for negotiations, but failed. Giuliani continues, “but the Biden crime family came out of it really good, really, really good. James, his brother, who had no experience in housing, was all of a sudden miraculously made part of a 1.5 billion dollar (seems like a convenient number for them) 1.5 billion dollar housing deal…”

Giuliani: “This is very sensitive. The stuff that we’re in possession of contains a thousand, maybe more, photographs that are highly, highly…anywhere from inappropriate to illegal and have to be possessed by the Chinese government.”

A top Republican senator acknowledged the possibility that the FBI investigated whether there was child pornography on a laptop and hard drive that allegedly belonged to Hunter Biden. Journalist Maria Bartiromo asked Sen. Ron Johnson, the chairman of the Senate Homeland Security and Governmental Affairs Committee, about a Business Insider report that described faint handwriting on a subpoena served last year to a Delaware business that was given a water-damaged MacBook Pro to repair but was never retrieved and a hard drive with its contents…The subpoena appeared to show the FBI agent who served it was someone named “Joshua Wilson.” There was a Joshua Wilson, according to a Star-Ledger report published last year, who was an FBI agent based in New Jersey who spent nearly five years investigating child pornography, but it remains unclear if this is the same Wilson and what exactly the bureau was investigating.

Bannon: “You’ve been able to see some of the footage here on the hard drive. On a scale of 1 to 10, 10 being, ‘I can’t get it out of my mind ever’ and 1 being ‘snooze-fest,’ about being horrific, 1 to 10, of the Hunter Biden footage, where is it?” Matthew Taylor: “It’s a 20. It’s the worst thing I’ve ever seen in my entire life. This is the worst stuff. The worst. And I mean, I spent 15 years studying the Clintons. This is the worst, most despicable, disgusting, filthy, corrupt garbage I have ever seen in my entire life.”

“This is not just any underage girl. This is a family member, and, uh, there were several figures that we have seen on this hard drive who have questionable ages but none of them could be verified as far as who they are, except this one and that’s Natalie Biden. She is the niece of Hunter Biden and the pictures depict her in ways that are very questionable – questionable enough that we, here at OAN, submitted a request to the Newcastle County Police Department in Delaware.”

Giuliani: “I was shocked when I saw them…I called the Delaware Police…and then we learned a day later that they sent it up to the AG of Delaware, who’s a politically elected official, a Democrat, and ally of Senator Biden’s, and then she punted it to the FBI.”

WARNING: graphic. The first GTV video is titled: Exclusive! Hunter Biden’s Sex Tapes, The CCP’s “BGY” Infiltration in the U.S., Evil Alliance to Dominate the World. GTV announced they will be releasing more video. The video was loaded on Hunter Biden’s laptop from hell that he left at a computer shop in Delaware last year.

Delaware Republican senate candidate Lauren Witzke has alleged that a source close to the investigation into Hunter Biden’s laptop has informed her that there are images of Senator Chris Coons’ daughter, in addition to seven other underage girls.

In a text message sent to Hunter Biden from his Uncle Jim Biden, former Vice President Joe Biden’s brother, Uncle Jim shares that both he and former VP Joe Biden are upset with accusations of impropriety but they don’t believe them. Jim and Joe Biden want to discuss with Hunter so they can all get their stories straight.

LUDE Media discusses “there are also some Hollywood stars in the photos. We’ve been telling you guys there’s Hollywood stars, and they’re all anti-President Trump, and why Hollywood has been controlled by the CCP.”

The diary was started while the author was in a drug rehabilitation facility in Florida, and details her romantic interests, crumbling marriage, struggle with drug and sex addiction, and family life as her father began to run for president. She believes she was sexually molested as a child and shared “probably not appropriate” showers with her father.

Did Hunter Really Leave His Laptop At A Repair Shop, Loaded With All Of This Evidence, And Did Someone Else Really Turn Over Ashley’s Diary Or Is She The Whistleblower?

Special thanks to The Sharp Edge for assisting with compiling this list.