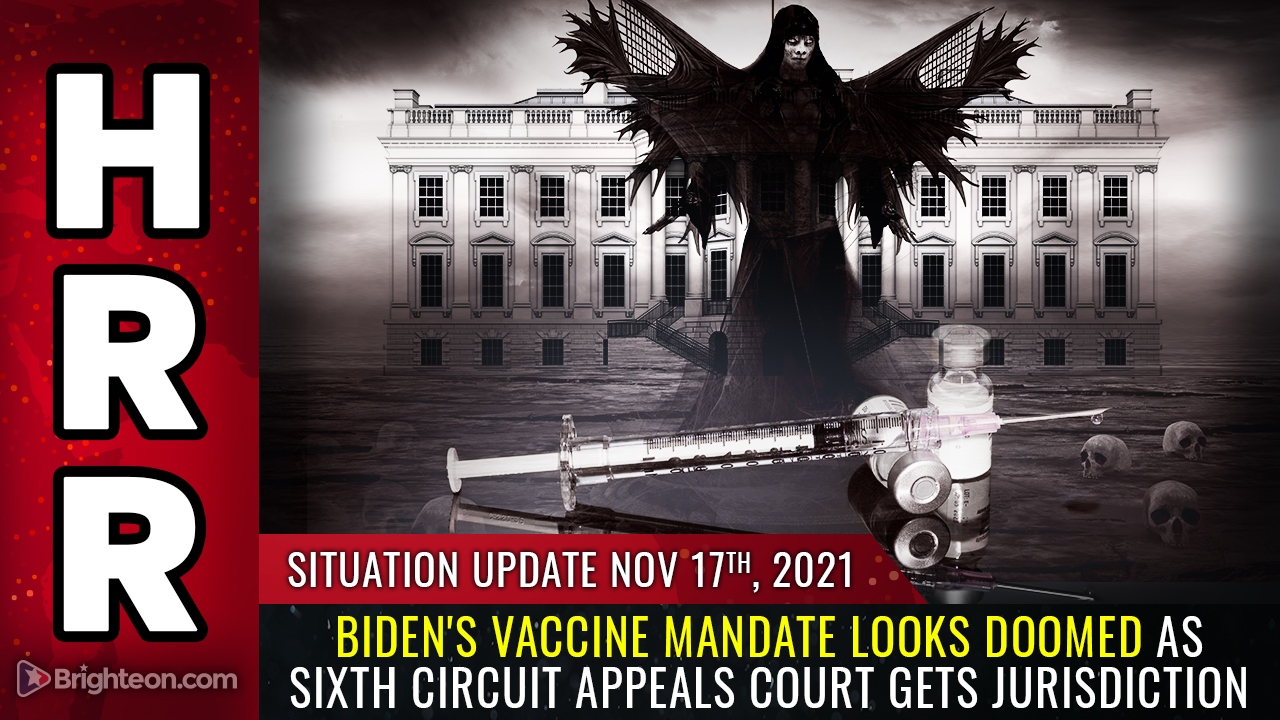 Why? The Fifth Circuit Court of Appeals isn’t the only court involved in this. Now, the Sixth Circuit court has taken up the consolidation of 30+ lawsuits against the mandate, spanning the entire country. And the Sixth court has 27 judges, with 20 out of 27 of those judges being nominated by conservative presidents (Bush 1, Bush 2, Trump and even Reagan).

With the Fifth Circuit court issuing its stay of the mandate, and the Sixth Circuit court now taking up the lawsuits filed across the country, it looks like Joe Biden’s unconstitutional vaccine mandate is headed for the trash heap of history. (As is Joe Biden’s entire presidency, come to think of it…)

On the facts alone, the vaccine mandate is blatantly unconstitutional and represents a grave violation of fundamental human rights. It claims that the government owns your body and can force you to be injected with absolutely anything the government labels a “vaccine.” The CDC, notably, had to change their own definition of “vaccines” in order to push mRNA gene therapy propaganda, claiming it’s a vaccine when it isn’t. So who’s to say the government won’t one day claim a euthanasia shot is a vaccine, too? (Or have they already…)

If the American people don’t own their own body, then they are slave property owned by the government… and we have at that point re-established slavery in America. There’s also the issue of discrimination based on what’s in your blood, with the Biden vaccine mandate claiming no one should be allowed to work unless they have toxic spike protein nanoparticles coursing through their veins. He’s essentially demanding that you’re only allowed to work a job if you commit vaccine suicide as an act of obedience to the state.

That’s simply not acceptable. In fact, it is an assault on humanity.

The courts are almost certainly going to strike this down as a broad overreach of power. While vaccine mandates will likely be recognized as legal for biohazard workers who occupy actual laboratories that handle level-IV pathogens, no vaccine can be mandated across the entire working population simply out of a demand that everyone comply with the bizarre demands of the very same government that funded the covid bioweapon to begin with.

Vaccine mandates are destroying the US economy, too

Another consideration that the courts must take into account involves the economic implications of forcing people out of work if they don’t comply with experimental medical injections. The worsening supply chain disruptions now afflicting America are largely caused by vaccine mandates, and the emptying of police departments, fire departments and sheriff’s offices — putting public safety at risk — is also due to vaccine mandates.

With hundreds of thousands of Americans already killed by covid vaccines — and possibly millions more this coming winter — it is a rational decision to reject the toxic, experimental jab, especially when the pandemic it claims to halt has a greater than 99% survival rate for most Americans.

Even worse, the experimental vaccine destroys immune function and accelerates cancer tumor growth across the body, meaning that taking the vaccine actually reduces a person’s health and lifespan. Thus, a decision to take the vaccine is an irrational choice that harms society as well as harming the individual.

By striking down the Biden vaccine mandate as unconstitutional, US courts will establish a precedent for fundamental human rights while simultaneously unleashing economic freedom that will help heal America’s broken supply chain and food shortages. If America’s economy is to function, we need people getting back to work, and that includes people with natural immunity who reject deadly vaccine experiments.

I cover all this and more in today’s Situation Update podcast:

Find more podcasts and interviews each day at: