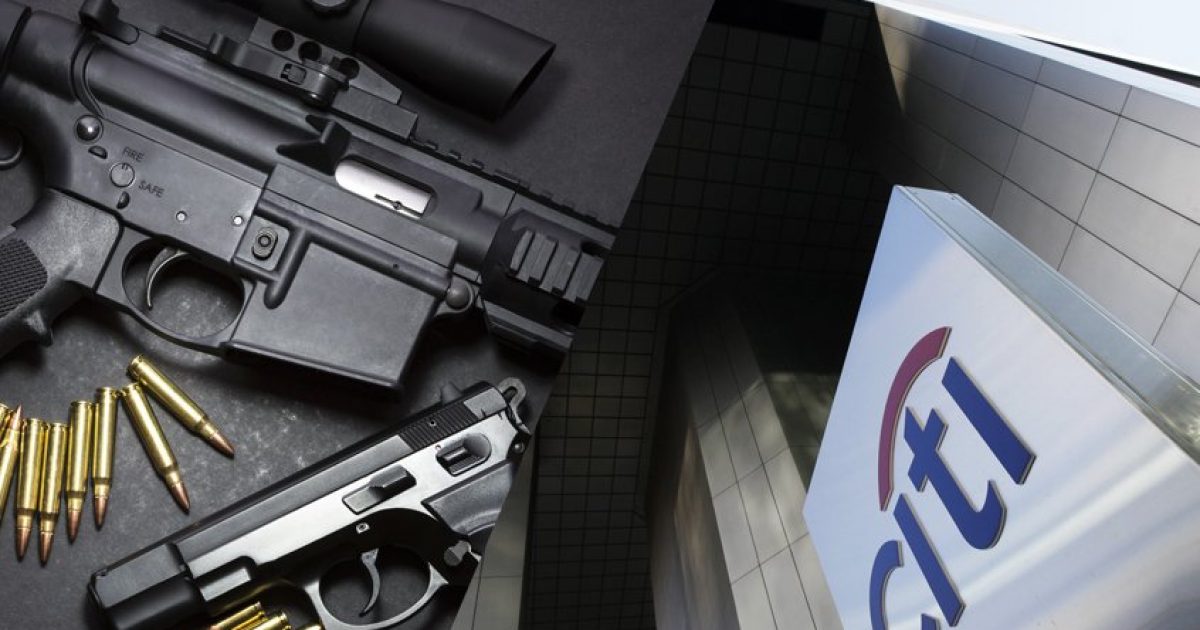 First, corporate giants like Facebook and Twitter targeted your speech. Now corporate banks are targeting your guns. You may recall when the criminal Obama administration put into effect the unconstitutional pressure on banks to not provide money to “risky” ventures such as gun dealers. You may also recall overpriced sporting goods store Dick’s eliminating semi-automatic rifles, discriminating sales of guns and destroying their inventory while their stocks plummeted, but now, it looks like after corporations have targeted your speech online, they may be aiming for your guns next.

In a report by Jose Nino at Mises.org, he points out that corporations like Citibank are leading the charge.

Ever since Dick’s Sporting Goods and banks such as Citigroup made business decisions in line with the mainstream media’s push for gun control, some opponents of gun control have debated whether private companies pose a bigger threat to gun rights than government does. In the case of Dick’s Sporting Goods, the outdoor company decided to stop selling rifles like the AR-15 and banned the sale of firearms to individuals younger than 21. In response to the Parkland shooting in Florida, banks like Citigroup also crafted their own anti-gun policies as reported in The New York Times:

Citigroup is setting restrictions on the sale of firearms by its business customers, making it the first Wall Street bank to take a stance in the divisive nationwide gun control debate.

The new policy, announced Thursday, prohibits the sale of firearms to customers who have not passed a background check or who are younger than 21. It also bars the sale of bump stocks and high-capacity magazines.

It’s not just gun owners who are experiencing limited shopping choices. Gun rights lobbies like the National Rifle Association have faced opposition from corporate America. Rental car companies like Avis and software companies like Symantec have severed their affiliate programs with the NRA in the wake of the Parkland shooting hysteria.

It appears the next fad in virtue signaling in the corporate world may be gun control gun.

Why More Laws are Not the Answer

US Senator John Kennedy of Louisiana recently filed the No Red and Blue Banks Act that would “prohibit the federal government from giving contracts to banks that discriminate against lawful businesses based solely on social policy considerations.” Kennedy does raise a valid point about how the government should put the brakes on business subsidization.

Unfortunately, Kennedy falls for the modern-day conservative trap of attacking government contracts because they benefit corporations who espouse leftist causes, rather than categorically opposing all forms of government intervention. For starters, all state contracts and privileges to businesses should be cut off, regardless of their stated goal or purpose. However, many well-intentioned conservatives are stuck on myopic thinking and fail to notice the implicit state coercion in the background. For them, ironically, more government is the answer.

Most people see the capitalistic façade of the US economy, but they don’t recognize the implicit threats of state force. Corporations these days are trying to beat the government to the punch when it comes to disassociating with politically maligned groups like gun owners.

If corporations continue to lag, they’ll receive veiled threats from the government to either ban these businesses or else have laws slapped on them. This was on display with the latest social de-platforming scandal.

All this wasn’t good enough for Sen. Chris Murphy (D-Connecticut), who demanded to know if the plan was to only take down “one website.” No doubt he has a whole list of sites he’d like to take down. Even more ominously, it was revealed that a direct threat had been made to these companies by Sen. Mark Warner (D-Virginia), who sent out a memo listing all the ways the government could crack down on Big Data if they refuse to go along with cleansing the internet of “divisive” material.

In many regards, politically-connected corporation’s decisions to discontinue business with certain political organizations provide cover for control-freak politicians. Instead of having to pass laws themselves, of which they can be held accountable for during election time, politicians can just pressure and even extort a corporation into carrying out their agenda. No controversial laws or regulations necessary — at least for the time being.

It Goes Back to Culture

It would be naïve to believe that these forms of dissociation and censorship are going to be confined to the private sector. At the end of the day, politics is downstream from culture.

What we’re seeing now is a manifestation of this degenerative process — in real time.

No matter what the naysayers claim, political correctness and state-linguistic complex are tools of the political establishment in its campaign to legitimize political universalism. Once businesses embrace state-linguistic complex hook, line and sinker, this same behavior will then permeate to other parts of society. The political realm will eventually be one of the last sectors to embrace these trends. This has become apparent with the incoming Congress, which is already proposing a slew of gun control bills ranging from universal gun registration to red flag gun confiscation schemes.

Yes, business decisions to disassociate with gun groups are not qualitatively the same as state-based gun control. In fact, state-imposed gun control is heavy-handed and much harder to repeal due to institutional inertia in government. Think about it: when was the last time we saw any meaningful legislation repealed at the federal level?

In the long-term, gun organizations can at least turn to other banks and service providers for their daily operations. In some cases, certain entities will emerge to serve the needs of niche organizations that find themselves ostracized by legacy institutions. The controversial social media outlet Gab comes to mind.

Other alternatives such as seeking legal remedies through the courts could be valid options for those affected by controversial business decisions. Plaintiffs could cite breach of contract actions such as violations of terms of service or defamation of character should they decide to take these companies to court. One thing is certain: adding more bureaucracy is not the answer in fighting corporate America’s political correctness agenda.

America desperately needs a political detox, and decentralization might just provide the cure.