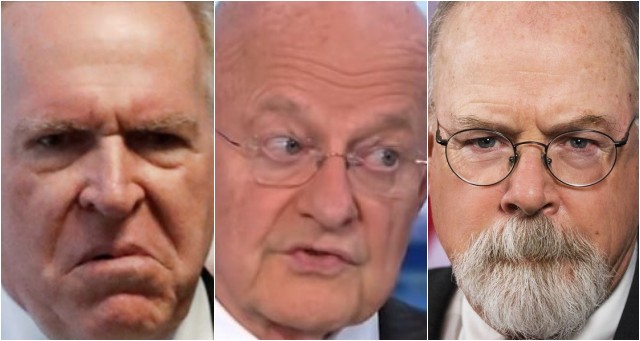 As you know, Attorney General Willian Barr appointed U.S. Attorney from Connecticut John “Bull” Durham to take on the probe to investigate possible misconduct by the intelligence community at the origins of the Russia investigation.

Durham, who is known as a “hard-charging, bulldog” prosecutor, was asked to help Barr “ensure that intelligence collection activities by the U.S. government related to the Trump 2016 presidential campaign were lawful and appropriate.” Durham also is probing whether Democrats were the ones who had improperly colluded with foreign actors, FOX News reports.

Durham intends to interview a number of current and former intelligence officials involved in examining Russia’s effort to interfere in the 2016 presidential election, including former CIA Director John Brennan and former director of national intelligence James Clapper, according to a report at NBC News.

Durham has also requested to talk to CIA analysts involved in the intelligence assessment of Russia’s activities, prompting some of them to hire lawyers, according to three former CIA officials familiar with the matter. And there is tension between the CIA and the Justice Department over what classified documents Durham can examine, two people familiar with the matter said.

Durham was reviewing the days leading up to the 2016 election and through the inauguration. But based on his initial findings, he has expanded the probe to include a post-election timeline through spring 2017 — up to when Robert Mueller was appointed as special counsel.

As part of the probe, Barr and Durham traveled to Italy to speak to law enforcement officials about their investigation, and also had conversations with officials in the U.K. and Australia about the investigation, according to multiple sources familiar with the meetings.

The attorney “is gathering information from numerous sources, including a number of foreign countries. At Attorney General Barr’s request, the president has contacted other countries to ask them to introduce the attorney general and Mr. Durham to appropriate officials,” Justice Department spokeswoman Kerri Kupec said last month.

Durham’s probe is similar to one being conducted by the Justice Department’s Office of the Inspector General, The DCNF reports.

The FBI relied heavily on the infamous but unverified Steele dossier in the FISA applications. The New York Times reported Saturday that Horowitz’s investigators have asked witnesses about an MI6 assessment provided to the FBI that raised questions about the judgment of Christopher Steele, the former British spy who authored the dossier.

Durham has also asked witnesses why the FBI relied on the dossier as part of the Trump-Russia investigation, according to The Times.

This is going to be great!