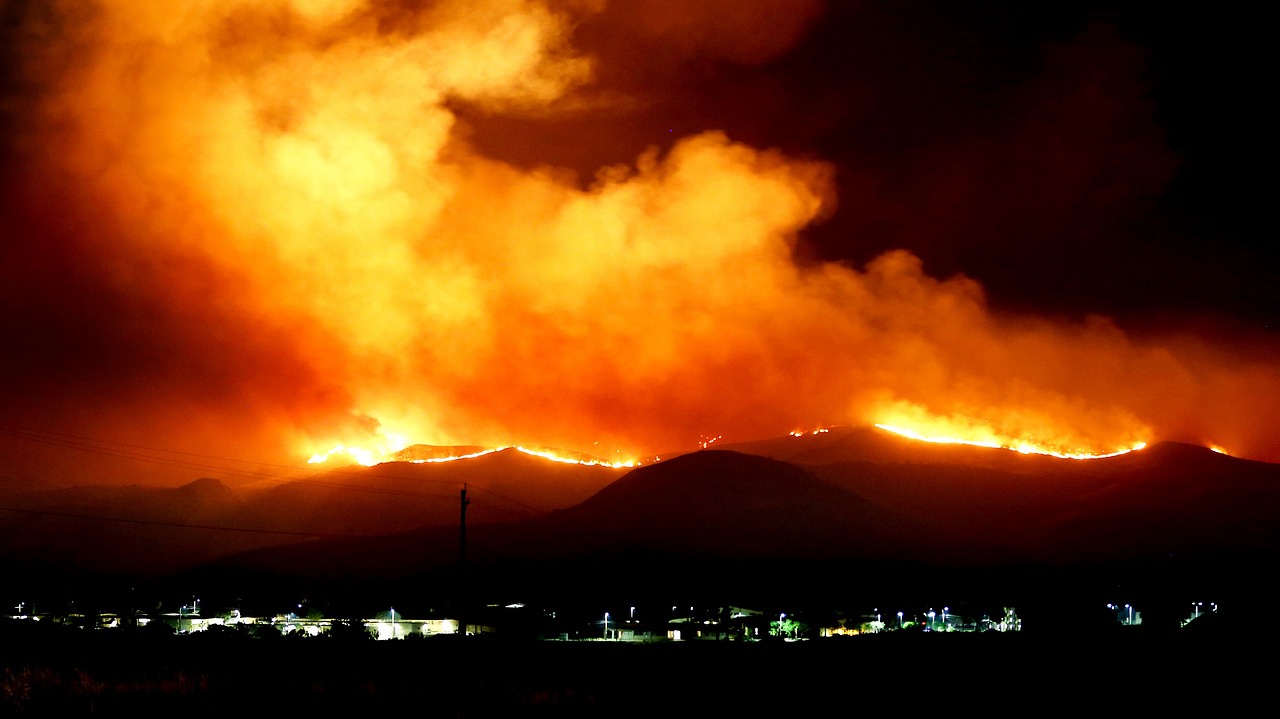 An “extreme wind event” will relentlessly pummel the state of California on Tuesday, Wednesday and Thursday, and it will be a challenge unlike anything firefighters in the state have ever faced before. Right now there are 17 wildfires currently burning in the state, but that number is expected to rise significantly over the next 72 hours. High winds can carry embers a great distance from the existing fires, and it only takes a single ember to start a new blaze. Over the next three days, “devil winds” of up to 80 mph will create conditions that are absolutely ideal for the spread of wildfires, and this has caused authorities to issue “red flag warnings” for 43 different California counties. To have this many counties under a “red flag warning” is extremely unusual, and Californians are bracing for 72 hours of hell as raging infernos burn all around them.

So far, the largest blaze is the Kincade Fire in northern California. It has been burning since October 23rd, and at this point it has consumed 75,000 acres.

To put that in perspective, that is approximately twice the size of San Francisco.

Thousands of firefighters are fighting the Kincade fire around the clock, but it is currently only “15% contained”.

The brave men and women that fight these fires don’t get nearly enough credit. They are literally putting their lives on the line in order to protect the rest of us…

San Francisco firefighters shared heart-stopping video on Tuesday showing the front window view of a firetruck rushing to the front lines of the fire on a burning hill in Sonoma County, passing through thick smoke, orange flames, and blazing embers.

San Francisco Firefighters Local 798 shared the footage on Twitter showing the Kincade Fire rage at 3am adding: ‘We appreciate their complete dedication to the task of protecting lives and property.’

Approximately 1.5 million Californians are currently without power, and needless to say this is fraying a lot of nerves.

Meanwhile, the Getty Fire in southern California continues to make headlines all over the nation.

At this point it is only “5% contained”, and many are concerned that the high winds could cause it to start spreading rapidly again.

More than 1,000 firefighters are attempting to contain the Getty Fire, and LAFD Chief Ralph Terrazas is warning that the high winds are expected “to be the worst the region has seen this season”…

With about 1,100 firefighters battling the blaze, crews’ main objective Tuesday will be to boost containment ahead of extreme Santa Ana winds set to arrive overnight and into early Wednesday. The gusts are expected to be the worst the region has seen this season, said LAFD Chief Ralph Terrazas.

Unfortunately, this crisis will not be over once we get to Friday.

In fact, Los Angeles Mayor Eric Garcetti is telling us that the Getty Fire will not be completely out “for a couple of weeks”.

Of course new fires can start at any time. According to Terrazas, all it takes to start another horrific blaze is for “one ember to blow downwind”…

‘It only takes one ember to blow downwind to start another fire. We’re very concerned about tonight’s wind event,’ LAFD Chief Ralph Terrazas said to the Los Angeles Times.

‘We know we’re going to have a major wind event tonight at about 11 o’clock that’s going to last until Thursday. We’re doing everything we can to wrap our arms around this fire to be able to prevent a potential of those strong gusty Santa Ana winds, pushing this fire, rekindling a lot of the fire and blowing embers a mile to two miles down range,’ Assistant Chief Jaime Moore with Los Angeles Fire said.

That is what makes these high winds so dangerous.

A massive new fire could start anywhere downwind of the existing fires, and it can happen at any time of the night or day.

So let us keep those living in California in prayer, because the next 72 hours are going to be immensely stressful.

If the fires were heading toward my home, I don’t know if I could sleep. When high winds are howling, these fires can move at lightning speed, and some Californians have had to evacuate so rapidly that they have literally lost everything…

Painter Wade Hoefer returned to his home at the Soda Rock Winery on Tuesday only to find his neighborhood in the heart of wine country was gone.

‘It’s just ashes,’ the 71-year-old artist-in-residence said. ‘I lost my whole life there. All I have is my clothes on my back’.

Could you imagine if that happened to you?

But what we do know is that the “devil winds” are coming, and that they will be extremely powerful for the next 72 hours…

Santa Ana winds blowing between 50 and 70 mph with isolated gusts up to 80 mph in the Santa Monica and San Gabriel mountains are expected to arrive late Tuesday and last through Thursday evening, forecasters say. The predicted wind speeds prompted the National Weather Service to issue an extreme red flag warning, cautioning the public of high potential for “very rapid fire spread, long range spotting and extreme fire behavior with any new fire ignitions.”

In essence, for the next three days Californians will be dealing with near hurricane-force winds as massive wildfires rage all around them.

It truly will be 72 hours of hell, and let us hope that the destruction caused by these horrific fires can somehow be minimized.

About the Author: I am a voice crying out for change in a society that generally seems content to stay asleep. My name is Michael Snyder and I am the publisher of The Economic Collapse Blog, End Of The American Dream and The Most Important News, and the articles that I publish on those sites are republished on dozens of other prominent websites all over the globe. I have written four books that are available on Amazon.com including The Beginning Of The End, Get Prepared Now, and Living A Life That Really Matters. (#CommissionsEarned) By purchasing those books you help to support my work. I always freely and happily allow others to republish my articles on their own websites, but due to government regulations I can only allow this to happen if this “About the Author” section is included with each article. In order to comply with those government regulations, I need to tell you that the controversial opinions in this article are mine alone and do not necessarily reflect the views of the websites where my work is republished. This article may contain opinions on political matters, but it is not intended to promote the candidacy of any particular political candidate. The material contained in this article is for general information purposes only, and readers should consult licensed professionals before making any legal, business, financial or health decisions. Those responding to this article by making comments are solely responsible for their viewpoints, and those viewpoints do not necessarily represent the viewpoints of Michael Snyder or the operators of the websites where my work is republished. I encourage you to follow me on social media on Facebook and Twitter, and any way that you can share these articles with others is a great help.