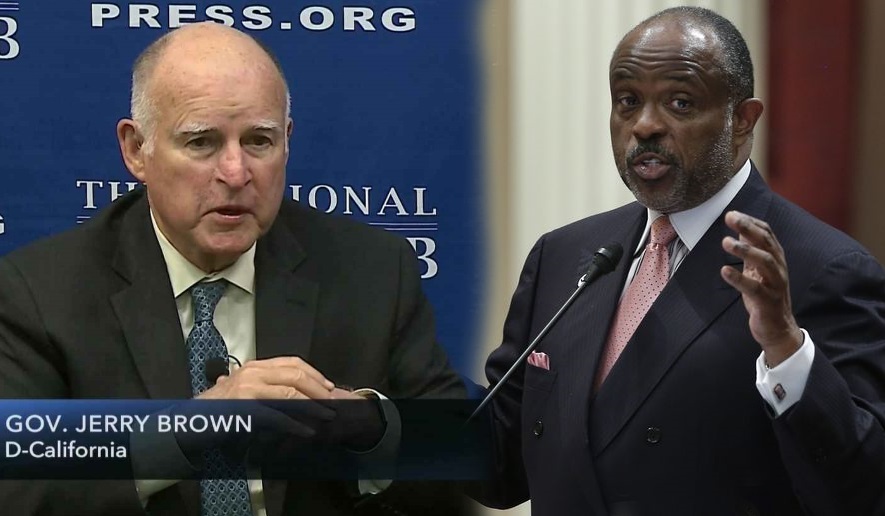 While pardoning people is something a governor does have the power to do, what is often amazing is that corrupt governors like California’s Jerry Brown often utilize that power to get friends in their own party off the hook when they have been found guilty of a crime that affects all the people of the state. The latest pardon from Governor Brown comes for a former Democrat senator convicted of voter fraud and perjury in 2014.

Former Senator Roderick Wright was convicted of felony charges of voter fraud and perjury in 2014 by a Los Angeles jury.

The jury had determined that he lived outside the district he represented.

Now, before we go further, where is this jury concerning Rep. Maxine Waters? Doesn’t she do the same thing? Isn’t this part of why people protested her and called for her impeachment?

Well, the issue now is that the legislature changed the law so that what Wright engaged in is now considered legal. Tell me, how does one represent a district he does not live in? The answer is they cannot no matter what “law” is written.

Wright was sentenced to 90 days in jail and then released.

His was not the only pardon that raised eyebrows.

As part of pardons the 38 people that Brown pardoned and 70 people whom he commuted their sentences just ahead of the Thanksgiving holiday, three refugees from Vietnam were also among those who were pardoned.

Brown’s pardons of refugees, all of whom arrived in the United States as minors, are his latest effort to help immigrants whose crimes could make them eligible to be deported. He said they’ve all completed their sentences and become upstanding citizens deserving of clemency.

The pardons don’t automatically stop deportation proceedings, but they eliminate the state convictions on which federal authorities might base deportation decisions. That gives the men’s lawyers strong legal arguments before immigration judges to try to prevent their removal from the country.

Brown pardoned Tung Tanh Nguyen, who was convicted of murder and robbery in 1994 in Orange County. The pardon says Nguyen risked his life to save civilians during a prison riot, and since his release “has become a tireless advocate for juvenile justice reform.”

Truong “Jay” Quang Ly, who was convicted of voluntary manslaughter in 1997 when a passenger in a car Ly was driving shot and killed another driver, now owns seven restaurants in Southern California. Hai Trong Nguyen, who was convicted of robbery with a firearm in Los Angeles County in 1999, volunteers with anti-recidivism and prisoner re-entry organizations.

Brown says all three have behaved well since finishing their sentences.

We’ll see about that. Time will tell, of course. However, at least in the case of the man convicted of murder, if justice was served, he’d be six feet under. Now, he’s advocating for “juvenile justice reform”? That will have nothing to do with justice.

Furthermore, how does Brown know these men have behaved well since finishing the sentences? Has he been friends with them or have they merely not gotten caught doing something else criminal? Those are fair questions to ask a man who protects illegal aliens in his state I think.