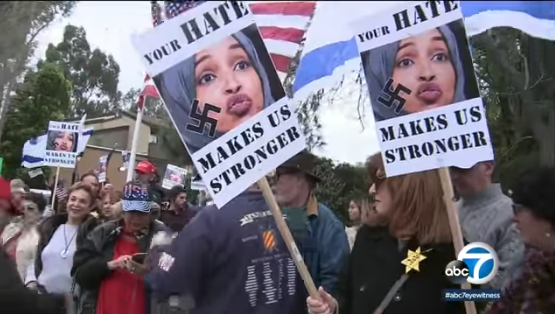 Rejecting Islamic anti-Semitism and its normalization. This is good to see. Omar ought to be under fire for appearing for Hamas-linked CAIR.

CAIR is an unindicted co-conspirator in a Hamas terror funding case — so named by the Justice Department.

CAIR officials have repeatedly refused to denounce Hamas and Hizballah as terrorist groups.

CAIR’s co-founder and longtime Board chairman (Omar Ahmad), as well as its chief spokesman (Ibrahim Hooper), have made Islamic supremacist statements about how Islamic law should be imposed in the U.S. (Ahmad denies this, but the original reporter stands by her story.)

CAIR has opposed virtually every anti-terror measure that has been proposed or implemented and has been declared a terror organization by the United Arab Emirates.

CAIR’s Hussam Ayloush in 2017 called for the overthrow of the U.S. government.

CAIR’s national outreach manager is an open supporter of Hamas.

But the Democrats wouldn’t dream of challenging her over this.

Hundreds of protesters rallied outside an event where a congresswoman spoke to a Muslim-American civil rights group.

The demonstrators were protesting the presence Saturday of U.S. Rep. Ilhan Omar of Minnesota at the fundraising event for the Council of American-Islamic Relations of Greater Los Angeles….

The Los Angeles Daily News reports that the protesters lined a sidewalk area outside the Hilton hotel in Woodland Hills, waving Israeli flags. A smaller group of counter-protesters held up signs in support of Omar.