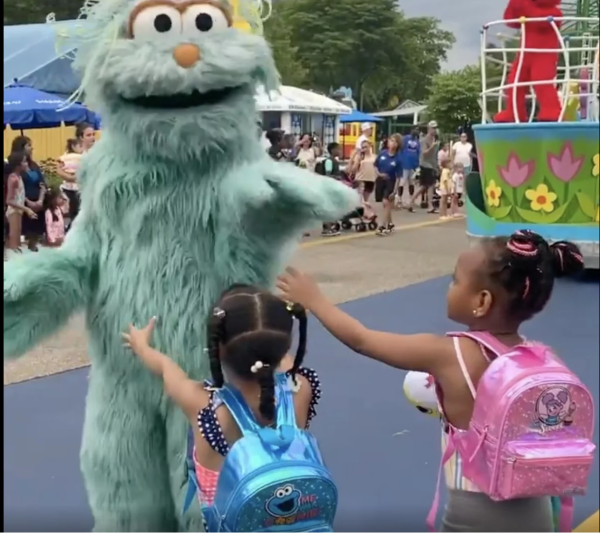 Insufficiently acknowledging black children while dressed in a peripheral vision impacting costume is now grounds for a nationwide struggle session about racism on Sesame Street. [Sesame Place apologizes after video shows 2 Black girls being passed over at a parade, NPR, July 19, 2022]:

Sesame Place Philadelphia has issued an apology and said its employees will undergo more training following backlash from a video showing an employee in a Sesame character costume seemingly ignore two small Black girls during a parade.

The video shows the two girls decked out in Cookie Monster and Abby Cadabby sparkly backpacks waiting along the side of the parade as a person in a costume of another character, Rosita, makes their way down. Before reaching the girls, the character gives out high-fives to another small child and an adult, both who appear white.

When the Sesame employee reaches the two Black girls — who have their hands outstretched — the character waves them off and keeps on walking, leaving the girls with looks of confusion and disappointment.

The adult who was with the children posted the video to Instagram and said they were on their way out of the park when they stopped for the parade because the girls wanted to see the characters.

THIS DISGUSTING person blatantly told our kids NO then proceeded to hug the little white girl next to us! Then when I went to complain about it, they looking at me like I’m crazy,” Instagram user @__jodii__ said in her post. “I asked the lady who the character was and I wanted to see a supervisor and she told me SHE DIDNT KNOW !!”

Backlash swiftly followed after the video took off on social media, where others shared similar experiences and videos, and prompted Sesame Street Philadelphia to issue a statement on its Instagram account in which it said it was not the character’s intention to ignore the girls.

Sesame Place went on to say that it had invited the family back for a personal meet-and-greet opportunity with the characters. But many, including singer Kelly Rowland, chimed in to say the damage was already done.

“Those gorgeous girls will never forget that feeling! THEY ARE KIDS!!!!! You should be ASHAMED of yourselves for this pathetic statement!” Rowland wrote in a comment on Instagram.

A second apology was posted on Monday in which the company apologized more directly and said its employees will receive more training for better guest experiences in the future.

“We sincerely apologize to the family for their experience in our park on Saturday; we know that it’s not ok,” the company said. “We are taking actions to do better. We are committed to making this right. We will conduct training for our employees so they better understand, recognize and deliver an inclusive, equitable and entertaining experience to our guests.”

“For over 40 years Sesame Place has worked to uphold the values of respect, inclusion and belonging. We are committed to doing a better job making children and families feel special, seen and included when they come to our parks.”

There’s no getting off this ride. Now, simply failing to give a black child (who the costumed character couldn’t see) a high-five is grounds for mandated sensitivity training and more accusations of racism on Sesame Street.