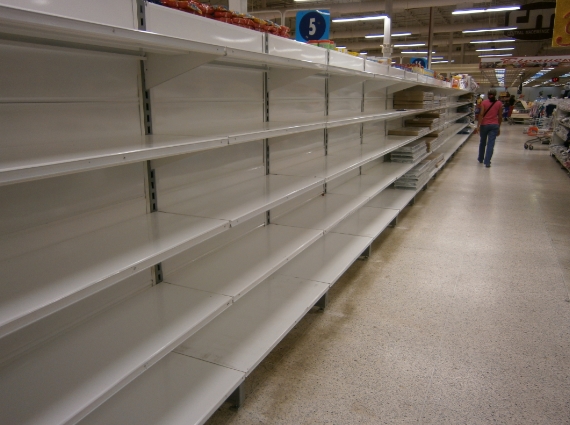 (Natural News) Hoping to stumble upon something, anything, that might help them gain the upper hand amid the ongoing, socialism-induced collapse of their native land, a growing number of desperate Venezuelans is now resorting to looting dead people’s graves, new reports warn.

At Cementerio del Sur, for instance, the largest cemetery in the Venezuelan capital of Caracas, most of the graves have already been dug up and ransacked. Folks are apparently stealing things like jewelry, gold teeth, and even dead people’s bones, which they’re then selling on the black market to others who use these remains in various religious rituals.

“Stolen bones sell for use in rituals of the cult-like religion, Santeria,” reports the United Kingdom’s BBC News. “Criminal gangs are also looking for gold teeth and valuable jewelry.”

Video footage captured by BBC News shows some of the devastating wreckage left in the wake of all this grave digging, revealing toppled tombstones, dirt piles scattered all over the place, and all-around mayhem.

“I come here every week, or every two weeks,” laments Eladio Bastida, whose now-deceased wife is one of the bodies currently buried at Cementerio del Sur, in Spanish to BBC News. “I keep watch. I worry I’ll arrive one day and she’ll be gone.”

“When I buried her, you could just walk in here,” he adds. “But lately you can barely reach her grave, because every tomb has been opened and the remains taken out.”

For more related news, be sure to check out Collapse.news.

Things used to be a whole lot different in Venezuela, back when society wasn’t collapsing, and people were more grounded in their moral values – as opposed to just grossed in the political happenings of the day.

Speaking from his heart, Bastida basically told reporters that it pains him to witness this continued decline – but he also says he’s confident that one day justice will be served.

“This is a lawless land. There is no respect for anything here,” Bastida laments. “God will punish those people that are doing this.”

“The damage is so widespread, cemetery workers say they are unable to stop it,” further reveals BBC News. “Even the tombs of historical figures have been broken into,” the news outlet adds, pointing to the grave of Romulo Gallegos, a revered Venezuelan novelist and former president, that was recently dug up and looted.

As for the country of Venezuela as a whole, things are hardly on the verge of improving anytime soon. Not only are cemeteries being destroyed left and right, but Venezuelans are repeatedly being left without power as a result of rolling blackouts, depriving them of basic services and sanitation.

While the Venezuelan government admitted back in 2016 that it has a major security problem on its hands as a result of this collapse, to which it responded by trying to increase police patrols, the situation is still much the same.

“The theft in this cemetery has reached such a point that some families even write the words, ‘this has been robbed,’ to prevent a repeat experience,” says BBC News correspondent Will Grant. “Grave robbing for gold teeth and bones with impunity. For the families affected, this is a metaphor for the country as a whole.”

A man named Jorge Liscano actually wants to exhume his relatives’ remains from one of the last intact tombs at Cementerio del Sur before thieves get the chance to ruin it along with all the others.

“This is the result of a social collapse, a lack of education, the loss of values in our homes and in our institutions,” Liscano is seen stating in a BBC News video report of the situation. “In recent years, this country has focused only on politics. We have forgotten about the things that make us human.”