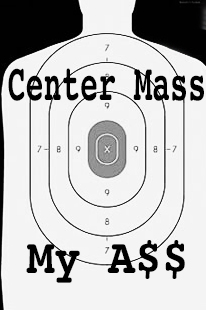 You’re in a public place with your family and you hear the sound of gunfire. You shove your family to the ground as you crouch, trying to locate the threat.

Suddenly a figure appears, firing a rifle into the crowd. You draw your sidearm and direct your fire into his torso—but he keeps coming, right at you and your loved ones. Not realizing he’s wearing body armor, you think you’ve missed and continue to instinctively fire center mass.
We know how this scenario ends unless our would-be citizen hero gets lucky and puts two rounds in the same hole.

Probably everyone reading this article remembers hearing about the infamous North Hollywood shootout of 1997. Officers were armed with 9mm and 38spec weapons and the perps were wearing home-made body armor, firing illegally modified rifles. It took forty-four minutes to stop these two felons…over two-thousand rounds total were fired. Twelve officers and four civilians were injured.

I remember when my trusty 1911 would have been enough…or my 357 magnum. Center mass with either of those and it’s all over but the bleeding. Today the most popular caliber weapon is the 9mm. I’ve carried a 38special for years, and before that a forty cal. and a forty-five. Any of those should have been sufficient to neutralize a threat, assuming I hit where I’ve trained to aim.

Enter body armor–and it ain’t hard to come by

From what I’ve read, the Ohio shooter was taken down by police firing below his body armor. Maybe someone eventually got a round in his head, I’m not certain. What I do know is he had enough time to kill and wound too many people.

We train so we don’t have to do a lot of thinking when a threat appears. I spent years working on instinctive shooting, not worrying about lining up the sights. While that isn’t a great technique in a public place with bystanders at risk, it is perfect for home defense—or used to be. More and more home invasions are carried out with the perps armored up.

In 1986 Congress passed and Pres. Reagan signed a law banning so-called cop killer ammunition. The internet is filled with videos testing different caliber rounds against Level II and III vests…rarely does one penetrate unless fired from a carbine, and man are they difficult to conceal! Bottom line, we aren’t going to get any help from the government, suddenly allowing the sale of armor-piercing handgun rounds.

It’s time to up your game.

The silhouette target is adequate when practicing for your CHL qualification, but it would be a good idea to add some aiming points on other parts of the target. I’ve discussed this issue with my local firearms instructor and he recommends focusing just below the armor, in the pelvic area. I suggest you consult with a qualified instructor in your area and get their advice on how best to train for this new public threat.