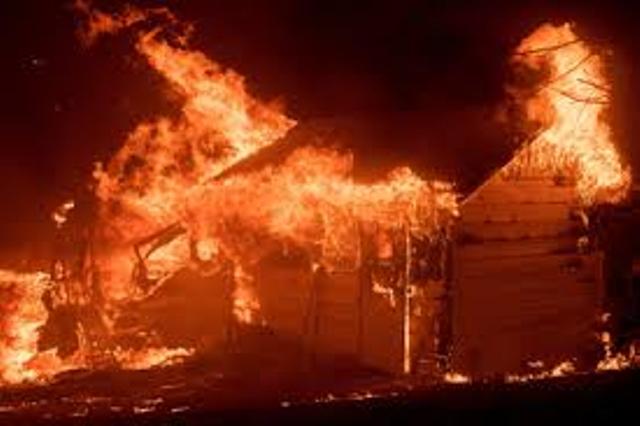 “We saw fire emanating from the house with loud chants from Muslims, “Allahu Akbar.”

“Muslims were monitoring our movements.”

It’s the religion of peace. Respect it or they’ll cut your throat and their leftist lapdogs will cheer.

NAIROBI, Kenya, Oct. 2, 2019 (Morning Star News) – A 36-year-old Christian near Kampala, Uganda is mourning the deaths of his son, daughter, mother and stepfather, who were killed when Muslim extremists set their house ablaze seven weeks ago, sources said.

Before the radical Muslims set Ali Nakabale’s house on fire on Aug. 20 in Nakaseke, Nakaseke District about 50 kilometers (31 miles) from Kampala, his wife and other area Muslims had become enraged that he and his mother had converted from Islam to Christianity, Nakabale said. He and his 56-year-old mother, Nankya Hamidah, had put their faith in Christ at an open-air evangelistic event in August 2018.

“I had just visited my aunt only to receive sad news of the burning of our house,” the distraught Nakabale told Morning Star News by phone. “Upon arriving home, I found the house destroyed by fire that burned my four family members, including my two children. On reaching the mortuary, I found their bodies burned beyond recognition.”

Killed along with Hamidah were Joseph Masembe, who had also left Islam to follow Christ and had married Hamidah in November 2018 after her husband’s death earlier that year; Nakabale’s 9-year-old daughter, Afsa Lawada; and his 6-year-old son, Yakubu Njabuga.

A NEIGHBOR TOLD MORNING STAR NEWS THAT HE AND OTHERS BECAME AWARE OF THE FIRE AT 1 A.M. ON AUG. 20.

“WE SAW FIRE EMANATING FROM THE HOUSE OF HAMIDAH WITH LOUD CHANTS FROM MUSLIMS SAYING, ‘ALLAH AKBAR [GOD IS GREATER],’” SAID THE NEIGHBOR ON CONDITION OF ANONYMITY. “ARRIVING AT THE SCENE OF THE INCIDENT, WE FOUND THAT THE HOUSE HAD BEEN RAZED DOWN, KILLING THE FOUR FAMILY MEMBERS.”

Nakabale said that the mosque leader of the Kyanja area of Nakaseke had written a letter to his stepfather, Masembe, stating, “It has come to our attention that since you got married to Hamidah, you have not been attending the mosque.”

“At this, then I realized that the Muslims were monitoring our movements,” Nakabale told Morning Star News.

Relatives first discovered the Christian faith of Nakabale and his family members in May, after he brought his young son to attend an evening worship service. The following day his son, Njabuga, told of his experience at the service to his mother, 32-year-old Sandra Nakamada. She became furious and began beating her son, Nakabale said.

“When my wife began beating my son, condemning his action of going to church, then I knew our visit to the evening prayers had leaked,” Nakabale said. “The same day my wife walked out of the marriage and left the home. We got scared because we knew that our lives were in danger. For three months, no Muslims visited our home.”

During that time, Nakabale’s mother Hamidah was caring for the two children, he said.

Nakabale, his mother and stepfather had been secretly attending the evening worship of an undisclosed church since December, without his wife and children. He said that in April his stepfather built a pork slaughterhouse near their homestead, leading area Muslims to question his presumed Islamic faith – and destroy the slaughterhouse, as pork is forbidden in Islam.

“It was on April 15 that the Muslims destroyed our slaughterhouse, following the incitement of the brother of Sheikh Jamada, claiming that Masembe was practicing prohibited acts,” Nakabale said.

Nakabale reported the deaths of his four family members to police, who have filed a case (No. SD: 32/21/08/2019) and are investigating, he said. Depressed and in mourning, he fears for his life and is living at an undisclosed location, a source said.

“Nakabale is depressed and is questioning God on the brutal deaths of his two little children,” said another source whose name is undisclosed for security reasons. “He needs counseling and prayers at this difficult moment.”

Also in central Uganda, in July a widow was forced to flee her home after receiving Islamist threats when area Muslims discovered she was a Christian. Such incidents are the latest of many cases of persecution of Christians in Uganda that Morning Star News has documented.

Uganda’s constitution and other laws provide for religious freedom, including the right to propagate one’s faith and convert from one faith to another.

Muslims make up no more than 12 percent of Uganda’s population, with high concentrations in eastern areas of the country.